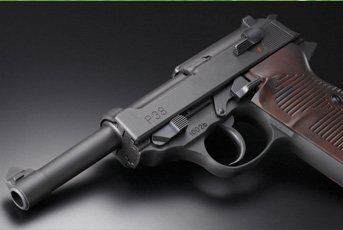 Well, it’s that time of year again with the War and Peace Revival Show fast approaching (it will be upon us by the time you read this) I thought it was time to give a nod to our re-enactor and Mil Sim pals and have a look at just what’s on offer in the Airsoft Universe for World War II gaming fans - and boy was I surprised! I have focused on a few of the most famous weapons but once you really start to look around you can discover some highly unexpected treasures

When I first started looking into this area I never expected to find the variety and availability that I did and with de-acts getting more expensive by the day I do think that those with an interest in WWII weapons could do a lot worse than to consider one of the bits of kit mentioned below – there really is something to suit everybody here!

We’re starting off with semi-automatics, one of the most famous being the M1 Garand which was the first semi-automatic rifle to be issued to infantrymen in large numbers and after around 20 years of tweaks became the US Army’s weapon of choice just before WWII. An airsoft version is made by Marushin, constructed completely from wood and metal (no plastic here) and is crafted to the same dimensions as the real steel original, pretty impressive and available from Redwolf Airsoft (www.redwolfairsoft.com ) at around £630. It’s an Automatic Electric Gun (AEG) which is powered by a battery driven system.  A ‘weathered’ version is also available. ASG also offer an authentic looking M1 Carbine featuring a semi-auto gas-blowback system with realistic action that closely mimics that of the real weapon, right down to the rotating bolt when firing.

Moving on to submachine guns, and this particular one has always been a favourite of mine, the Sten MK2 which emerged after British forces were trying to replace weapons lost at Dunkirk and were unable to source enough Thompson submachine guns from the States.  The Royal Small Arms Factory in Enfield were commissioned to produce an alternative and succeeded with this cheap to produce weapon. With the original model needing a few adjustments the MK2 became the most popular model with around 2 million units seeing service. The airsoft equivalent is made by ASG, is officially licensed by BSA and is available from Wolf Armouries (www.wolfarmouries.co.uk) for a miniscule £200.  It’s an AEG and carries 50 rounds – way more than a real Sten!  Wolf Armouries also stock another iconic early 20th century sub-machine gun (in two versions); the Thompson M1928 submachine gun with drum magazine and Thompson M1A1military submachine gun – both are AEGs made by King Arms and priced at £250 each.

The most iconic Sub Machine Guns used by the German Army were the MP38 and MP40 (MP designates Maschinenpistole.), sometimes referred to as Schmeissers which were developed in Germany and, despite the impression given by popular culture, particularly in war films and video games, that were used extensively, in fact they were generally issued to Fallschirmjäger, tank crews, platoon and squad leaders; the majority of German soldiers carried Karabiner 98k rifles (see below). An airsoft replica of the MP40 is made by ASG and is available from Fire Support (www.fire-support.co.uk) for a very reasonable £165.

The next offering is a light machine gun – the Bren Gun which was the primary British infantry light machine gun during WW2 and was issued on a scale of one per rifle section with 2 men using it and every member of the squad being trained to use it in an emergency. For Airsoft purposes these are only available custom built from Shoot N Scoot (www.shootnscoot.co.uk) with price on application (anyone tempted?).

No WW2 breakdown would be complete without the Luger P08 pistol which started out being used in World War 1 and by the time World War 2 rolled around production had been taken over by Mauser. Captured Lugers were much prized by Allied soldiers during both of the World Wars as war trophies. WE make an airsoft Luger which is priced at around £100. Also look out for airsoft Walther P38 and PPK pistols.

The American Colt 1911 is equally famous and very popular as an airsoft pistol being available in many versions.

Over to the Russians for the Mosin Nagant 91/30, which at the beginning of the war was the standard issue weapon of Soviet troops and millions of the rifles were produced and used by the largest mobilized army in history.

There are a couple of airsoft offerings for Mosin–Nagant rifles, such as the full wood and metal Zeta Labs version available from Airsoft World (www.airsoftworld.net) or the equally crafted Red Fire from Rules of Engagement (www.rorairsoft.co.uk).

At IWA last year we also saw G&G’s G980 is a gas blow back (GBB) replica of the German G98K WWII service rifle that is fed by a 9–round gas magazine with a hop-up adjuster cunningly disguised as a stock bolt! This is a cracking looking rifle.

I honestly didn’t realise the sheer scope of the WWII airsoft variants available when I decided to write this article and I have only scratched the surface of what’s out there for the avid WW2 Skirmisher but believe me if this is an area that you are interested in then the possibilities are almost endless! There are a couple of stores that have dedicated World War II section of weapons, such as Main Irish Airsoft (www.mainirishairsoft.com ) over in Dublin who have become something of a specialist supplier; samples of their prices (in Euros) are €154.99 for the Maruzen blowback version of the Walther P38 and €129.99 for an all metal Colt 1911 from WE.

Have a look around the websites, you’ll be surprised at what’s on offer.