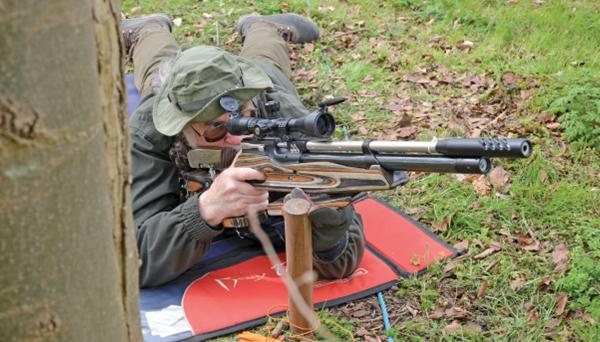 Well we’re off, and with a fuller competition schedule in 2016 than ever before, there are very few weekends without an event to attend, if you’re that way inclined. I’m still trying to sort my back-up rifle and custom stock, so no fine detail to report on that front yet, but my old S400 just feels spot-on, so I’ve every confidence, and no excuses.

Hot on the heels of the World Championships comes the first HFT Masters event, held in mid-April at the now well established venue of Cambridge HFT near Shepreth. It’s a cracking ground, and with a full course of 30 targets, spread between two separate wooded areas, in between the famous log store. Then two sections which are out in the open field, anyone intending to finish on a half decent score, needs to have nerves of steel, and plenty of grit and determination. It’s invariably windy, and with that exciting mix of target locations and positions, we end up with wind to contend with, from just about every direction. It’s sponsored by BSA, BASC, The Airgun Centre, Hawke, Jack Pyke, Ronnie Sunshines, Airgun Gurus, Field Sports Channel, & SACF!

Start As You Mean To:

Due to the large numbers of entries for these events, Ian Bainbridge and the crew took the decision to book in two squads - one in the morning and two after lunch. With a ‘shotgun’ start, where groups of shooters all start together on different lanes around the course, it’s obviously pot luck at which target anyone begins. I had a bank of targets to start, fanning round the back of the top wood, and here, some were taking quite a bit of wind, as it swept through from the left side off the field. Before I knew it, I think I’d planted three of the first six; not ideal, but keeping it together until a terrible close stander towards the end, gave me a solid 52.

Tight at the top as they say, and as it panned out, 55 was the winning score! My crummy start had cost me dear. Ho hum! Three shooters, Dan Measures, Roger Lait, and former World Champion, Vince Holland, all posted 55ex 60, and after a lengthy shoot-off, Dan secured a satisfying win in tricky conditions.

HFT Masters: Cambridge -Results: (See the table on the following page for a list of results)

Of course what makes these HFT Masters events that bit different is the fact that the discipline shots i.e. compulsory standing and kneeling shots, are all free-style, with no trees to lean on, or supports of any kind. You really have to go up a gear, but it’s all great sport, and a good challenge. I find standing shots a science in itself, and occasionally, in practise, can hit a reasonable standard, either posting surprisingly tight groups on paper, or downing knock- downs. Practise is one thing, but HFT competition is all about coming up with the goods for that one discipline shot out of the blue. It takes some doing, and whilst there are a few of the top shots who can keep on top of it, to most of us, the free standing shots remain one of the hardest aspects of the whole sport! I just need 10 warm up shots; is that too much to ask?

Late April saw the first round of the UKAHFT Series, held in Quarry, South Wales, and whilst I couldn’t make this one, I understand it was the usual testing conditions. So congratulations to top shot Richard Woods, for stamping his authority with a superb 59ex60 on the day. Just how he did it, I’m not sure, having heard some accounts of the conditions! Brilliant shooting!

One recent development as previously mentioned, concerns the fact that the UKAHFT competition circuit has now allowed wind indicators to be used on the rifle. I think this makes sense and completely agree with their useespecially when it has been pointed out that some shooters are using e-cigarettes purely as a wind indicator. As it stands, there currently remains some reluctance from the HFT Masters side, to follow suit and allow wind indicators to be gun-mounted. What they are saying though, is that they may be used, just not attached to the gun…....so it depends how inventive you want to be!

Next up is the brand new Shooting Show, with an HFT Masters event on the Sunday. I’ll be there, so I’ll fill you in next time on how this new venture unfolded. Until then, keep practising!