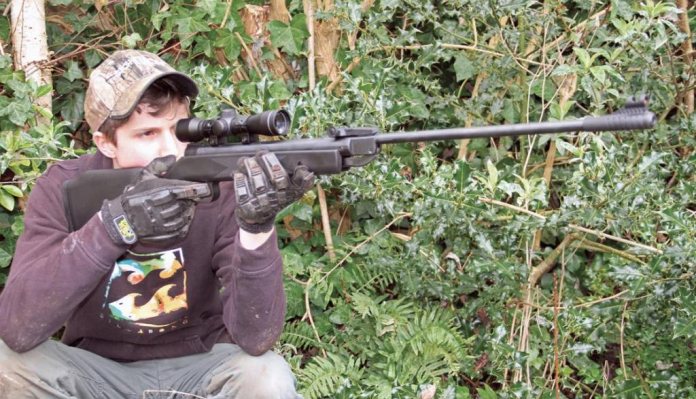 SMK have certainly cornered the market in reasonably priced air rifles and pistols that perform better than their meagre price tag would portray.

To many newcomers, or casual shooters, the price is the real deal and many just want something that works and they can have fun with, shooting a few tin cans or targets. The SMK B2 range certainly fulfils that brief, as the range is quite extensive and at its heart is a simple spring piston operated break barrel air rifle. It is available in many guises; such as the Hardwood, Custom, Camo Clad and today’s test rifle, the Synthetic. This model is a great value at only £74.95 and will be a good start for a newcomer, as it would a seasoned shooter.

Dimensionally, as one would expect, the overall gait of the SMK B2 is compact, and as such, is very easy to operate and aim and hold for prolonged plinking sessions without getting tired. The overall length is still 42.5-inches but at 5.5lbs weight it feels very light in the hand, even with a scope fitted. The barrel is a neat 18.5-inches long that gives good leverage to the cocking stroke, that in reality, is very mild. In fact, SMK have added a feature that is usually only found on higher priced air rifles, if at all, and that is a barrel locking lever. This ensures that the barrel and action are perfectly aligned and secure when you return the barrel back in line after cocking the B2 and also ensures a good air seal between barrel and transfer port. It is quite a large lever sited on the left front of the receiver that is pushed forward and down as you break open the barrel to release the catch. If you have shot a Weihrauch HW35, you will have no problems with this.

I was impressed with the lack of spring noise on cocking, as some ‘cheapies’ can be very twangy, the B2 was very sedate and easy to cock, so is ideal for the youngster amongst us. That’s not to say a little tune would not improve things, but for the price, no one is going to worry. The receiver and barrel have an overall matt blued finish that is sensible on a gun of this value.

The trigger is simple and in keeping with the B2 ethos of just shoot and leave alone. It is a bent piece of steel, smooth but fine for the job in hand and releases the spring piston at around 4lbs weight, with surprisingly little creep. You can soon master it and start shooting some groups. There is no safety and you don’t need one to be honest, just be careful.

Open sights are furnished and the fore sight is a moulded in polymer job, with a shroud that has a ventilated top to illuminate the Day-Glo red dot element inside. The rear sight is equally clear, with two green Day-Glo dots that perfectly bracket the red dot foresight for a clear sight image. You have 0-9 elevation clicks and the same for windage; you also have scope mounting rail.

You can opt for a wood stock, or even a camo clad version of the B2, but this is probably the best option from a no-nonsense, tough sort of stock. Being synthetic, it is both light and weather proof, and if it is dropped, less likely to be damaged, as a wood stock would be.

It is a moulded, black polymer of hollow construction, so a bit resonant on firing but it is also proportioned to be smaller shooter friendly. The length of pull is 13-inches but even my 6ft frame can handle it well. You have moulded-in chequering too, which is okay, but I did not like the hard plastic butt pad, as it could topple over on a hard surface.

Yes, it is cheap and yes it does not feel like a synthetic stocked HW77, but it’s a sixth of the price! It’s light, a little short in the stock but that’s to be expected and cocks easily. You do have to fiddle with the barrel lock, but once it’s mastered, it’s no problem at all and an asset to the accuracy of the B2. As with all springers, it calms down after a while and packing grease etc. burns off to reveal a quite consistent and reasonably powerful sporter for the price. SMK supplied a 4x32mm scope, which I could only mount very forward on the scope rail.

Due to its size, I was not expecting too much power but I was wrong, the B2 was actually a nice little performer and was not very pellet fussy. Most of the pellets achieved the 8.0ft/ lbs energy mark and so could make this SMK a plinker, as well as a short-range vermin tool.

Accuracy too was good, most groups at 20-yards were under an inch. The RWS Hobbies shot very well and gave 0.75-inch groups and a velocity of 559fps and 8.2ft/lbs. Best energy went to the Webley Lazapells at 522fps for 8.6ft/lbs and a consistent 1.0-inch grouping. Even the heavier Pest Controls and Bisley Magnums that are not really ideal for this rifle, shot well at about 7ft/lbs and groups just over the inch mark.

What’s not to like for the price! £74.95 buys you an affordable, well-made, good performing starter air rifle that is built to shoot straight and take the odd knock here and there. A competent little starter or fun gun that will also double as a short-range vermin tool if desired.