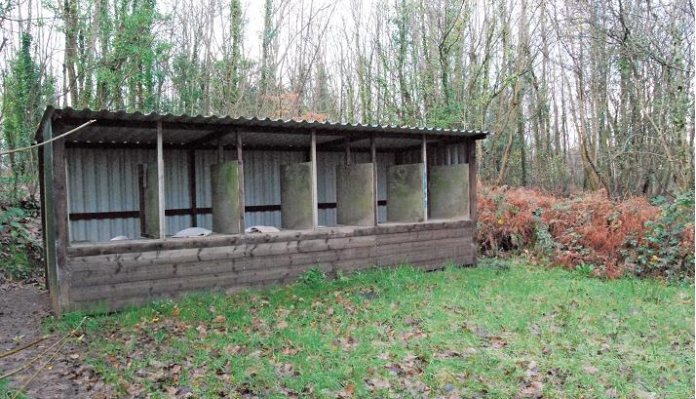 If it hadn’t been for a post on a shooting forum, I would still know nothing about Treetops Shooting Centre in South Wales.

Turns out it has been open for 27 years, which makes me a bit slow to catch-on, but in my defence most of that time it has been a clay shooting centre, although the airgun side of things has been up and running a while. The reason I visited, was to meet Spencer Ward, who works at Treetops part time and who posted the thread I saw on the forum. For this piece I am going to concentrate on the airgun side of the business, but there is a lot more to Treetops, with yet more still to come. I met Spencer and Dave Kilby at the warm wooden lodge, which is the clubhouse. After an initial intro and a mug of coffee, Spencer took me on a tour of the place.

Treetops has two separate zero ranges. The first is around 35 to 40 yards long, has individual covered firing points, with chairs, and is for good old fashioned plinking, be that with air pistol, rifle, BB or airsoft. There is a steel sheeted backstop around eight feet high, so within the range itself, provided you are safe and clear up after yourself, you can shoot paper, tin cans, targets, or whatever is your pleasure, excluding the local wildlife of course. The second range again has a nice big covered firing point, but of a more open design, with tables and chairs available. This range is 50 yards long and has a variety of spinners, knock down, steel plate and other targets, just as any well-equipped airgun zero range should. Between the zero range and the HFT / FT course, there is a large netted range, designed to be used by paintballers and airsoft enthusiasts. This gives an idea of Spencer’s thinking in trying to accommodate as many forms of air gun shooting as possible, in his own words “to get people away from their computers and outside”.

We then come to the piecede- resistance, the course. This presently has 30 knock-down targets set up for HFT type shooting, and was used the weekend before my visit for a fun HFT shoot, where FT, HFT and hunters all competed side-by-side.

The shoot was such a success that the guys who took part will be back again in a few weeks for another go. As can be seen from the photos, the course runs through a wooded valley with a stream and pond, and targets are set up in such a way to give new shooters a chance and yet challenge the more experienced. This course will be expanded soon from 30 to 60 targets, which will then give a high degree of flexibility for FT, HFT or sporting shooters, and will work for shooters who are new to the sport right up to experienced regular competitors. Access to the course will shortly be improving, along with permanent firing points; it’s not bad right now, just a little soggy after all the recent rain. In total Spencer has 38 acres, much of it woodland, to play with, so the opportunities to build further courses are almost endless. Naturally, given my past and the land available I mentioned field archery. Spencer and Dave have discussed the possibility of putting out some targets and have it on their list of possible expansions to the facilities.

On the clay side, Treetops concentrate on English Sportingtype shooting with a variety of layouts to suit shooters with a wide range of experience. They also offer one to one coaching as well as being able to cater for groups, be it a stag/hen do, club or charity event, or just a group of friends looking to try shooting for the first time.

Currently there is work underway to clear-up and make easy access to a large lower pond, this will be stocked and made available as a fishing lake. There are also plans to make some alterations to the lodge to increase the size and scope of the on-site shop.

Treetops is open on a pay and play basis, seven days a week, with a variety of tariffs for each of the facilities offered. I shall be dropping into Treetops again sometime soon, only next time, I’ll have a rifle with me, and I’m looking forward to seeing how things develop in 2016.

Monday-Saturday 9.30 - 5pm (open until 8pm Thursdays, if there is daylight!)
Sundays 10am til 2pm
Closed Bank Holidays