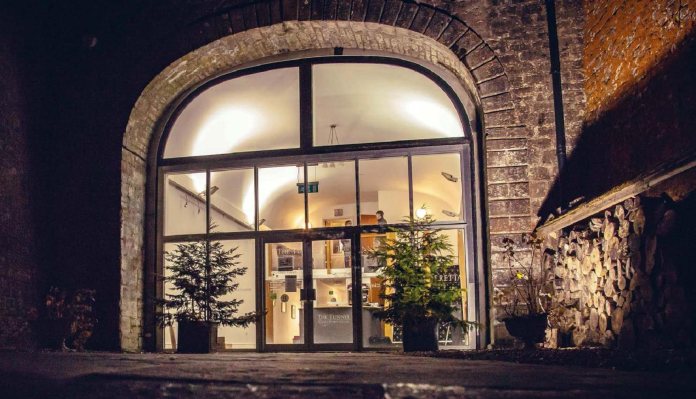 A highlight of the Target Shooting Show at Stoneleigh last autumn was the new t2 series of AR-style rifles. Produced by show sponsor Tunnel Target Sports Centre, they come as straight-pulls in .223/5.56, .300BLK and 9mm, and as semi-autos in .22LR and .22WMR. This last option really got my attention, because experience with semi-auto WMRs has shown me how challenging it is to achieve the functionality and accuracy serious use demands, especially with higher-capacity magazines.

Curiosity well-and-truly piqued, I pitched for a review sample, but the first batch of the new guns was already spoken for, and not due for delivery to customers until January 2022. What I did get, however, was an invitation to visit the Tunnel and try the t2 onsite.

Though located near Charmouth on Dorset’s famous Jurassic Coast, well away from my usual stamping-grounds in the Midlands, this was too good an opportunity to pass up. A month later I was motoring southwards, speeded on by my eagerness to get behind this exciting new rifle and to check out a facility several people had already told me I simply had to see. Better scenery than Birmingham, too!

Suffice to say, my visit so exceeded expectations that the rifle will be getting a dedicated review, and what follows is going to fill you in on everything the centre itself has to offer, and why it’s everything UK shooting should aim to be. You see, the Tunnel is not just a range complex, it’s integrated into local tourism at one end, and national defence at the other; has found the perfect path through the mess of UK firearms legislation; and has a proactively positive attitude to the future of shooting in this country that’s a perfect antidote to all those who mask their apathy behind a cloud of gloom.

Tourism first. As already noted, the Tunnel is situated near one of the most celebrated stretches of British coastline.

Even in December, it was stunning, so no wonder people flock there in droves whenever the weather warms up and the sun shines. It’s perfect for family holidays, too, which means plenty of parents looking for ways to keep kids entertained with exciting new activities. Enter Tunnel Treetops, a wonderful array of aerial walkways and zip-wires in a beautiful patch of broadleaf woodland adjacent to the Centre. Well maintained, and expertly staffed, it’s the perfect safe way to get the adrenaline flowing.

Q. What else is like that? A. Airsoft. So, the Tunnel also runs ‘Action Air’airsoft shooting experiences. They use airsoft to train all the key principles of gun handling and marksmanship: safety, stance, sight alignment and trigger control, building them progressively so that participants can move on from success at static shooting with a pistol to a fully-dynamic 3-Gun experience with airsoft handguns, carbines and shotguns. This isn’t running about in the woods playing Rambo. It’s a demonstration of what mainstream shooting sports are all about: the sense of achievement that comes from the responsible application of skills built through proper training and dedicated practice, plus the sense of being part of something special.

Now we come to the Centre itself, and that firearms legislation, because thanks to the Mini Rifle provision in section 11 (2), the one that enables outfits to set up self-contained ranges in trailers at shows, they’re able to run rimfire-based shooting experiences within the range complex. These go from a basic bolt-action starter session to a semi-auto ‘Military’ session with the S&W M&P15/22, both shot on the 25m range. There’s also a ‘Long- Range’ experience using a bolt-action Ruger Precision Rimfire at 100m, all under expert supervision, of course.

Naturally, you don’t have to progress from zip-wires through airsoft to firearms. Nevertheless, what the Tunnel provides are multiple, family-friendly, affordable routes not just into shooting, but into understanding what shooting is really about: good, clean, safe, and rather special fun. A world away from all the murder and mayhem routinely served up on gaming platforms, movies, TV and tabloids.

What have we got here then?

Complementing the family-friendly nature of the Tunnel’s portfolio of experiences, are the positive impressions received on arrival. Access is off the main A35 trunk road, along a short drive leading down into a leafy cutting that accommodates a spacious car park and frames the arch of the tunnel itself at the far end. Constructed in 1831, it is an imposing structure of masonry and brick, yet within it the front of the centre is completely glazed, thus revealing the reception desk, warm lighting and smart décor inside. There are no blank walls, steel doors and anonymous intercoms here. Of course, the glass is armoured, the car park is covered by cameras, and there’s a full array of security sensors. However, this is all discreet and there’s nothing to detract from the sense of being in a normal, friendly and rather special place.

Inside, the main hallway steps down progressively to a café area overlooking a pleasant terrace with outdoor tables and seating, beyond which is a smart, well-stocked gun shop and the centre’s unique 100m range. To the right of the hallway are the loos, armoury and 25m range. The height of the massive Victorian arch means there’s also an upper floor, which houses both a 35m range and a dedicated reloading room (used to provide club members with a consistent supply of ammunition and for training courses). The ranges are warm, clean, well-lit and well-ventilated, offering 4 firing points suitable for bench-rest or standing shooting. They are rated for airgun, rimfire rifles, gallery rifles, LBPs, and black-powder guns, with up to 460 ft/lbs (25m) and 476 ft/lbs (35m) of muzzle energy. Targetry includes regular paper and IPSC steel, with additional custombuilt moveable backstops available to permit shooting at shorter distances.

It’s a testament to the lemonsinto- lemonade attitude at the Tunnel that they saw the arrival of COVID not as a commercial catastrophe, but as a golden opportunity to mark their 10th anniversary by renovating the entire facility. Indeed, the centre owes its genesis to a similar sense of opportunity: permission having been granted for its construction in the run-up to the 2012 Olympic Games, which in turn enabled its ongoing Section 5 designation as a training centre for Team GB’s Sport Pistol and Rapid-Fire Pistol shooters.

Most impressive is the 100m range, which occupies a separate building constructed within the deep cutting below the tunnel. The whole Centre takes advantage of a stretch of disused road that was closed in 1990, and the steep banks and solid construction of the tunnel make for a setting that is as spacious as it is discreet and secure. The 4 firing points here permit shooting from multiple positions: bench-rest, prone, kneeling, standing, from shooting sticks and even from the ‘ship’s rail’. The backstop is rated for muzzle energies of up to 14,740 ft/ lbs: that’s .50 BMG or 12.7x108mm territory. Being fully enclosed, the range is perfect for load development and for achieving a true zero regardless of the weather, plus can be used for the DSC1 shooting test, as well as a variety of other training scenarios. There’s also a suite of fully-equipped classrooms above the shop at the entrance. For those interested, there is even a set of glamping cabins located on top of the tunnel, providing convenient, affordable accommodation for multi-day visits.

Administratively, the Tunnel is owned and operated by the Target Sports Centre Ltd (TSC), but it also hosts two Home Office Approved clubs: one for ‘miniature rifle’ (Tunnel Target Sports Club) and the other for small and fullbore shooting (West Dorset Rifle and Pistol Club), who obtain access to TSC’s facilities by virtue of their subscriptions, have a large and active membership, and welcome new members. Application forms are available via the clubs’ website. Crucially, members do not require their own FAC to use the clubs’ guns, making them another key access point to shooting sports. Additionally, individual certificated shooters, clubs and RFDs can hire ranges privately at reasonable hourly rates, with discounts for juniors.

Going a step further, the Tunnel is also a section 7(3) location, meaning that FAC-holders can purchase, store and shoot historically-significant handguns on the premises. The category is wider than you might expect, so stop moaning about ’98, and get yourself ‘seven-three’d’. As my hosts at the tunnel, Mike (RO) and Richard (owner), pointed out: “It really isn’t that hard, just do the paperwork and get shooting!”

There’s a load more to say about this inspiring visit, but you can check out the Tunnel’s website for further details. For now, my thanks to my hosts for their time, and lookout for a full review of the brilliant t2 .22WMR AR-style rifle in a future issue of Gun Mart.