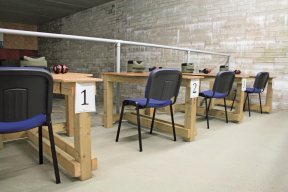 My dictionary defines ‘serendipity’ as meaning “the occurrence and development of events by chance in a happy or beneficial way”. That very much described both the development and my discovery of The Tunnel target sports centre, just off the A35 on the Devon/Dorset border near Charmouth.

Richard Clist is the man behind The Tunnel, in every respect. He originally bought the land and the tunnel with a view to building a ‘Grand Designs’ type home, but local authorities and planning departments being what they are, he was unable to persuade anyone to let him start work.

In the end, exasperated by the red tape, he used an almost unknown bit of planning law to provoke action, and provoke it did, but not exactly in the direction Richard thought it would go; as when the local authority came back to him, they told him he could get permission for commercial storage, caravan storage or a shooting range… what?

Through the Glass Doors

The Tunnel itself used to be the A35 and is a listed building, so the entrance is both grand and at the same time gives the impression of a professional business. Once inside, you find yourself in a large atrium with the smiling face of Richard at the reception desk. A long corridor to the left of reception leads to most of the facilities, with a staircase to the right leading to the open office, ruled over by manager Kira Smith and also more working areas of the centre.

As the centre is constructed in a tunnel, you are obviously expecting it to contain a shooting range; in fact there are three. Just along the corridor from reception there is a 25 metre range, suitable for air and fullbore guns. It is here that any ‘practical’ club competitions are held. Upstairs there is a 35 metre indoor range, again suitable for a range of guns.

This used to be a 50 metre range, but room had to be pinched back to construct an AIS judgmental training suite (more of this later) as well as a reloading room, which is well-equipped with Dillon presses, that produce much of the ammunition used by both the club and the training facility. Beyond the 25 metre range is the cafe and across the courtyard is the new shop and also the entrance to the present jewel in the crown of the centre, the 100 metre indoor range. The range is licensed for guns up to and including .50 cal.

The Tunnel centre is very much a business of two halves, as there is a very active club with an armoury on-site for the storage of both member’s firearms and also ammunition. The other side of the business is the training facility; with the AIS laser suite previously mentioned and also four classrooms. These are currently finding frequent use for Maritime Firearm Competency training, teaching merchant seamen to use firearms, something required since 2007 for British Registered vessels travelling through certain oceans. There is also a very active trade in Birthday, Hen/Stag parties, youth groups and corporate events, as the 25 metre range also has a function room behind it, with a window into the 25 metre range so that party members can see how everyone else is doing on the range. Full supervision is provided for all events and parties, and all the staff at the centre are NSRA and NRA qualified. Food and drink can be provided for parties and the restaurant is also licensed, for post-shooting congratulations/commiserations.

The Tunnel has been granted status as a designated site for Section 7(3) firearms. This means that Firearms Certificate holders who fulfil necessary criteria are allowed to own and shoot pistols of historical interest, but they can only be used and kept at a designated club/range. The Tunnel is a designated site, which means members of the club are able use and store their pistols on site.

While I was visiting, Richard took full advantage of my archery and shooting backgrounds and showed me part of the 15 acre woodland that he owns and which is adjacent to The Tunnel. He is currently planning to get some local FT/HFT course setters in to assess the possibilities of laying courses in the woods for regular competitions, with talk of prizes that will make the shoots wellworth attending. Plans are also underway for a 50 metre indoor clay-shooting layout. We did not go into too much depth on this, but it is presently moving forward and is an incredibly exciting prospect.

A few months ago I did not know this centre existed and yet the facilities are both easily accessible and exciting. Richard’s future plans are equally exciting, and when the FT and HFT courses open I will be back to have a go and see what further development has taken place. I get the impression that this centre will grow and grow, not just in its facilities but also in popularity, as they offer more and more for the local and visiting shooter.