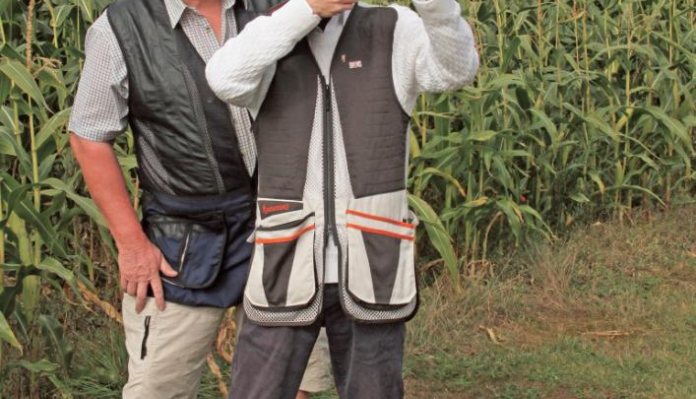 Its is a very true saying that you never forget your favourite dog, first shot rabbit, or favourite teacher at school. All are a poignant milestone in one’s journey as you progress through life and having a good start with a good teacher sets you up correctly for the future.

My son, Jake, and I have had enjoyed a fantastic three years of learning and growing his shotgun skills, from day one without any knowledge into today’s safe, competent and respectful shooter. This is all down to one man, and its not me! Guy Bond of GB Shooting in Buckinghamshire.

As Jake continues with his rifle shooting, I can guide him, but Guy is the man to teach all Jake needs now to progress into a fully rounder shotgun shooter. Guy has been teaching Jake not only the skills set he needs to hit clays from all positions, angles, wind conditions and intuitive lead techniques, he has also been guiding him through the transition from clays to game/ vermin shooting. This involves not just shooting his beloved Browning 325 20-gauge, but Guy has been weening him onto 12-gauge and 410 with respect to differing styles of shooting technique as well as correct loads to use. This is made so much easier with Guy’s relaxed but professional approach to shooting that encourages progression without finding fault all the time. He’s great fun to be with and makes the whole mornings shoot a real pleasure for both of us!

This recent visit was about familiarisation with differing guns and loads. Jake helps out a lot with the guns and ammunition tests for the magazines, but Guy was now to teach correct load choice, style and correct shooting position/technique against some very testing clays to progress Jakes knowledge to the next step.

We had a new Browning Limited edition 12-gauge Shadow model, Browning 325 20-gauge and a Browning 425 Elite 410, so a good mix of calibres and, yes, all Browning. That’s not to say any of the other makes would not be suitable, but rather like a car or camera choice if you like one maker you tend to stick with what you feel more comfortable with, and Potts like Browning’s!

You need to instil confidence, especially with clays, and this is where a one-to-one lesson is a real bonus, as you can work at your own speed, try the same trap or position until you get the technique correct or reposition at a differing angle for a different shot or bird and then try a alternative point of aim, i.e. maintained lead, flow through or spot shooting.

For Jake, Guy has taught him all the techniques and these latest lessons are about watching the clay to determine the speed, direction and think about all that he has been taught in the past to then make judgement to shoot either early, leave it until it is slower, have the gun up and ready or alter his swing method to a maintain lead or follow through technique that a particular clay might need. Shotgunning, especially clays as Guy explains, is a lot about your mindset and staying focused, a couple of pairs hit and then misses means you have just lost concentration.

It also important to have loads that do not kick you too much so you can build up your technique and then build up the shot loadings to a game or pigeon load as necessary. Jake always uses Hulls Pro Twenty’s, 21-grams as Guy uses or 24-grams of No 7.5 shot size. Their recoil is light and they pattern superbly. For 12-gauge shotguns clients at Guy’s school use the equally impressive and well-priced Hull Comp X loads. These are a 65mm case with a fibre wad and 21-grams of No 7.5 shot. They are superbly smooth with light recoiling, so you just concentrate on shooting and swing and don’t worrying about recoil or flinching at all; great load this one for the 12g. You don`t need huge gram payloads for this type of shooting and these 21-grams hit the clays just as hard and are more environmentally friendly due to less lead in the air.

Finally, the Browning 425 Elite in 410, which is a personal favourite of mine. Loaded correctly it too makes a really fun clay gun. Eley`s new 3-inch Trap loads that use a plastic wad with a 19-gram loading of No 7.5 shot is perfect. I think both Guy and us both were surprised just how effective these loads were on clays and they really added a great edge to some interesting doubles combined with no recoil, low report and big smiles!

Let’s start with the first choice, over-under for point ability, reliability and not to burn your fingers after a dozen shots! A few shooters who use 16- and- 28-bores swear by them, but chances are if you forget your cartridges or run out there won’t be any close by to borrow, so stick with 20- or 12-bores. The .410 is a lovely soft light gun not only for youngsters but very suitable for slightly built shooters or people with injuries that can not lift a heavy gun. What is the difference between 28g of no.6 shot fired at 30-yards in a 20- or 12-bore? Ballistically speaking the 20 will have a tighter spread, but the main difference is if you kill a high bird you can boast that it was with a 20-bore but if you miss it was because you had a 20-bore! By all means shoot either a 20 or 12, but just concentrate on one sort as your mind will play tricks if you start switching between the two.

Barrel length should be 28-, 30- or 32-inches depending on your size. The longer barrels do help with point ability on longer higher birds, but 30-inches is my preference.

Ideal shot size should be 28g of 6s fibre wad, but if shooting very high birds then consider dropping to 5s or even 4s with 30, 32, or if you gun can take it 36g! With 20-bores I think it defeats the object shooting heavy loads, so 24 to 28g is best. My favourite is Hull cartridge high pheasant.

The two most popular makes of shotgun used today are Browning and Beretta. These two popular makes come in all different sorts of shapes, styles and budget too, and you can buy a new gun for under £2000 or used around £1000. Both makes will last a lifetime if looked after and cleaned after every use. I am a Browning shooter and have 325, 425, 525 and 725 models and even a handmade Belgium one. They all shoot very well, and I know I can never blame the gun if I miss! Unfortunately, if you spend an awful lot of money on a shotgun, it won’t make you a better shot!

Guy Bond is an England FITASC shooting team manager whose expertise with a shotgun and tailor-made lessons will not only make you a safer and more competent shooter but will also give you an increased game bag and better averages on the clay range. Guy Bond not only delivers individual master classes but is renowned as a family business catering for family, friends, individuals and business on a friendly informal basis on his family farm. Guy has a long career of coaching from 1993 to 2007, and managed the unbeaten GB FITASC shooting team; so that should tell you some thing.

We always love visiting Guy, as Jake’s shooting and confidence continues to improve, and it is excellent value for money.