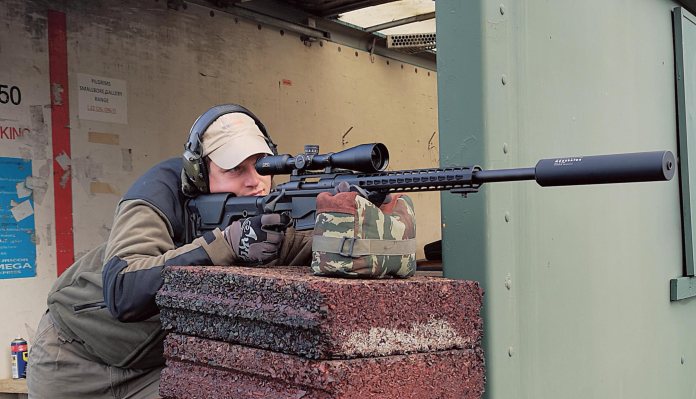 I have been an advocate of shooting instruction since I visited Orion Firearms Training in Wales over five years ago to shoot steel targets for the first time.

I left with a clear focus and enough skills and knowledge to pursue a new and exciting interest. Since then, it is all that I have been doing. However, it has now been given a competitive streak by the Precision Rifle League (PRL), and a whole new set of skills are required.

Since Orion has become one of the venues for this new and exciting discipline, I was keen to get some first-hand experience, maybe learning some new skills along the way. After all, every day is a school day!

The basics of the PRL boil down to an individual competitor, who needs to be able to engage reactive steel targets from 25- to 1000m. For increased difficulty, the majority of shots must be taken from challenging positions within the natural terrain and improvised structures, referred to as barricades. Examples of these include gates, doorways, tank traps, vehicles, rocks and anything else awkward to shoot from! That’s not all, each stage requires a specific number of hits within a pre-determined time limit as well. The aim of my visit would be to work my way up to some timed shoots from a variety of positions. If the weather played ball!

There are two divisions in the league, which are based on the value of the rifle and optics. Factory exists to allow more shooters to take part before costs become prohibitive, so a generous maximum of £1500 for the rifle and £1500 for the scope, whereas the Open, as the name suggest, has no ceiling. There are calibre limitations, which are the same for both, a maximum of .30 Cal producing no more than 3200fps of muzzle velocity.

Most of the rifles used, include a chassis system. This is because their inherent strength, which is not only ideal for the rigors of the competition in all weather conditions, but they also help to maximise accuracy. The additional weight also helps absorb recoil and increases the chances of spotting the fall of shot. They are versatile and customisable, allowing users to choose from a huge selection of aftermarket stocks and pistol grips. Most include either an M-LOK or Keymod compatible forend, which allow the attachment of additional grips, barricade stops, weights and tripod adaptors. Crucially, they also use detachable magazines, an absolute must when shooting the fast-paced stages. Raytrade UK Ltd, kindly lent me a Remington 700 PCR (Precision Chassis Rifle) chambered in 6.5 Creedmoor (CM). This rifle sits under the £1500 limit for the factory class and includes a 24-inch barrel, fully adjustable Magpul PRS GEN III butt stock, accepts AICS magazines and includes a Squaredrop compatible handguard. I fitted a GPO 6-24x50 scope and Evolve sound moderator to help tame the recoil.

John O’Brien (Orion’s owner) wanted to make sure that the rifle and ammunition met his basic performance benchmark. After checking zero, and shooting supported from a bench, I was expected to achieve consecutive hits on a 10-inch steel gong at 800-yards with the PCR and Remington Premier Match 140-grain factory ammo. If I had been using a .308, then the target size goes up to 20-inches. Which just goes to show the huge advantage 6.5CM has over .308! I got the required hits and also managed to print a respectable group.

Next up was a shooter skills benchmark. John was keen to instil the benefits of practising some core positions, including unsupported standing and kneeling. If these could be mastered, then I would have a good basis for understanding what is needed to create a good firing position when faced with any of the obstacles found on the competitive circuit.

I was talked through the standing, which was never going to be easy with a full-length rifle weighing well north of 10lbs! As I struggled to steady my aim, I remembered why I didn’t practice standing shots very often, but I was soon hitting a 10-inch gong at 100-yards consistently. We spent some time trying the out two popular kneeling positions, to find the one that suited me. I then had a go at transitioning from standing to kneeling and vice versa, which definitely opened my eyes to a fairly large gap in my skill set.

With the weather closing in, I was keen to have a go using some of the barricades and to find out how to maximise performance from each one. I started by using a wall that provided a ledge for slouched standing and kneeling supported shots. Neither were perfect, being an awkward height and providing too little surface area to get really comfortable. It was clear that half the battle is interpreting the structure and then adapting to it, trying to get low down and getting as many contact points as possible. A few tweaks and adjustments could make the difference between a position working or not.

Next was a rooftop barricade, which can vary in size and angle. It was one of the more comfortable obstacles, although no doubt the target distance would be greater and the time allowance shorter! On the day of a competition there may be some caveats during its use, such as the shooter’s feet must not touch the ground, forcing them to adopt a different pose. There were two main stances I was shown, the first simply laying on my side, supporting the rear of the rifle with my free arm, or what I called the prison pose. This was similar to being on all fours, making it quick to adopt and easy to adjust when trying to get in line with a new target.

It wasn’t long before the idea of additional aids such as tripods and bags were introduced. Their benefits becoming immediately apparent, while trying to shoot through an angled wall manufactured from pallets. It had windows cut out at different heights and provided absolutely no support for the rear of the rifle. In theory, a large padded bag or rucksack could be used, or alternatively, the leg of a tripod could be positioned so that I could grip it in such a way to offer rear support. I tried this method while shooting from a tank trap and found it particularly effective, giving me a stable enough platform for targets all the way out to 800-yards. However, during their setup, the supports can burn valuable time, so their use must be carefully considered.

With the rain beating down, we tried a couple of example course of fire from the safety of one of the cabins, to help highlight other challenges. I was asked to switch between targets at 200- and 800-yards by using a window as a rest and transitioning from a standing/ kneeling supported positions. The variance in distance prompted a decision, to dial in between shots or dial for 800-yards and to try and hold off using the reticle at 200? I tried both ways, highlighting some limitations with the scope. The GPO’s reticle was in the second focal plane (SFP) so the subtensions were only valid at maximum magnification (24x) which was too high for quick target acquisition at 200-yards. If I dialled between shots at the two distances, it required multiple turns of the turret, making it very easy to get lost. Challenging stuff!

Although the amount of practical experience gained from my visit was impacted by the rain, I came away with my eyes opened. For me, the skills that can be gained from competing or even just trying precision rifle shooting are the answer to becoming a better all-round shot. I want to improve, and I will now have to incorporate some of the challenges into my shooting and training regimes this year. It doesn’t have to be too costly either, as dry firing is a proven form of practice and bags/tripods can always be borrowed. I was pleased to find that an out of the box rifle like the Remington PCR was competitive; at the end of the day, I only dropped one hit on a figure 11 target at 800-yards while kneeling at a window frame. My advice: have a go with whatever you have got and don’t be afraid to miss!

If you are interested in having a go, then the competition dates for 2020 have been announced.