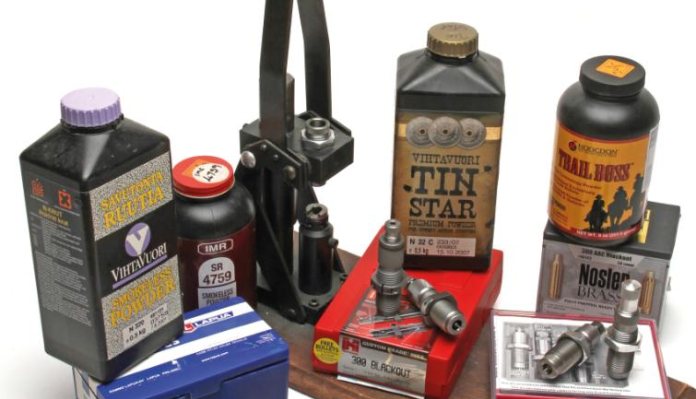 When it comes to fiddling about with odd calibres, subsonic ammo or sabots, not to mention weird and wonderful wildcat calibres, I just can’t help myself sometimes.

Recently, I have been playing about with some FAC-rated air rifles in large calibres (.25, .30 and .35 cal) and this reminded me that I am still looking for a .30 cal bullet that can expand properly in my centrefire rifles at subsonic velocities, as nothing really works that well. Despite some new subsonic .308 factory loads and .30 cal reloadable bullets for subsonic loads, we still aren’t really there in terms of terminal expansion, without that worrying factor of overkill and ricochets.

The trouble is getting a light enough load to make a .30 cal projectile go subsonic (1050 FPS), while keeping the powder charge at a sensible and consistent volume for correct ignition. Most .308 subsonic rounds use a heavy bullet (between 185 and 220-grains) with a small charge of fast powder to achieve 1050 FPS and decent energy levels. This means a heavy and largely non-expanding bullet with a lot of momentum, leading to over-penetration and ricochets!

I use between 9 and 10-grains of Viht N320 powder for the heavier bullets in my subsonic .308 rounds. However, I have had success with the lighter Hornady 90-grain XTP bullet that does expand and still delivers a decent energy transfer on arrival!

Now, with all these new FAC-rated air rifles emerging and the new specialised ammunition they need to feed them, I thought I would take a look and check out their potential. Boy, was I glad I did!

I sourced some lead .30 cal pellets from FA Andersons, Sportsman Gun Centre and Uttings. These took the form of JSB Exact pellets, both 44.75 and 50.15-grains, which were mimicked with the Emperor or Rangemaster pellets also made by JSB. I also got some interesting Predator Polymag pellets, which came in at 44.75-grains and showed a polymer tip. Last but not least, I also got hold of some FX Hybrid slugs, which have revolutionised the airgun industry. These highly accurate slugs show a hollow point design, weigh 44.5-grains and have a non-waisted profile, making them a good choice for subsonic centrefire use, as seating and crimping them should be easier.

First up was my S&L Legacy rifle in .300 Blackout, which has a superb 1:7.5” twist barrel with cut rifling, and when slugged with the pellets, all of them engaged the rifling - phew! My Tikka .308 Win has a bit more of a worn barrel but all the lead pellets still engaged the rifling just fine.

The .300 Backout die sets that I have don’t have separate bushing dies to adjust the neck diameter and tension, so I relied on the standard Hornady and Lee die sets. When resizing the brass, the neck was still a tad loose and some of the pellets fell into the case. I removed the expander ball on each resizing die and tried again. I also had to use the Lee Collet die to just nip the neck end to get enough tension to seat the pellet and then followed this with a full crimp – bingo!

The Hybrids were obviously easier to seat than the wasted pellets, as the head and skirt diameter are the same. With the JSB and Predator pellets, you could push the skirt down until the head just rested on the neck and then crimp to give a nice grip. Load wise, I chose fast burning, Viht Tinstar and IMR Trailboss, the latter being a bit difficult to find now. With the 17”

Legacy barrel and the fact that these pellets were very light for 30 cal, I started loads at 6.0-grains and worked down, that way I knew the pellets would exit the barrel OK and not get stuck!

I did run the data through Quickload but as with all subs, you need to just shoot a few loads to see how your rifle behaves, as subsonic centrefire rounds can behave oddly when it comes to ballistics.

I always use magnum primers and have found CCI 250 Mag to be very consistent. In addition to this, I found Trailboss more consistent, with a more linear burn than Tinstar.

Please note that the max loads were the only ones that had non-smoky necks and Trailboss was a lot cleaner than Tinstar. What was very obvious, was that fit and neck tension were crucial to consistent velocities, as you needed to crimp the pellets well to get a proper powder ignition. Otherwise, a loose pellet gave away velocity. The accuracy was actually surprisingly good! Less the odd flier due to neck tension issues, I shot 30 and 50 yard groups as these loads are designed for casual close range vermin.

At 30 yards, the FX Hybrids shot some lovely 0.75” groups, with the 4.5-grains of Trailboss powder producing 991 FPS and 97.7 ft/lbs energy. The same weight JSB Exact pellets, with their waisted design, shot solid 1.0” groups, but we did get fliers. This was probably due to variable neck tension on the hard to crimp pellet heads.

By comparison, the 50.15-grain JSB pellets shot a lot better, with some cloverleaf 3-shot groups at 30 yards. The best load here was 7.5-grains of Viht Tinstar for 958 FPS and 101.5 ft/lbs. The total surprise, well at least to me, was the Predator Polymag pellets. They look pretty evil with that red polymer tip and their overall dimensions helped with consistent velocities, more so than the other pellets tested.

From the Schultz and Larsen Legacy, with a load of 3.5-grains of Trailboss, we had 989 FPS and 100.8 ft/lbs of energy. They were very quiet to shoot with the S&L Ultra Dome sound moderator fitted and at 30 yards, all the shots touched. I had the odd flier but far fewer than the other pellets.

At 50 yards, things were not so good. The best I could achieve was 1-1.25”, with the best coming from the 50.15-grain JSBs. So, this would be my max range with these types of loadings in my barrels.

For the .308 Win loads, I used mag primers and some Wilson neck bushing hand dies. Again, neck tension was key. I used a 0.328” bush to grip tight the waisted pellets and a 0.330” bush for FX Hybrids. The best load from the Tikka was 7.5-grains of Viht Tinstar, with the FX Hybrid slugs producing 1087 FPS and 117.6 ft/lbs of energy.

I am expanding the testing to more .308 Win rifles to see how other types of rifling affect the groups/velocities. All the .300 Blackout loads work in the .308 Win, but velocities will probably alter due to the differing load density/case capacity.

I know it’s a bit off-piste but it’s always fun to have a try at something different and yes, it’s a short range option only, as standard FAC .30 cal guns offer better accuracy at extended range. I had some great shots on some very surprised rabbits and a squirrel. The results were very humane!