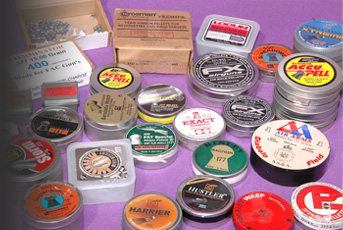 It’s a well worn old adage, but one well worth repeating, that a rifle combination is only as good as the weakest link. This rule can obviously be applied to every component and accessory that makes up the whole – no more so than the ammunition you use. Yes, the good old airgun pellet is the final link to ultimate performance, and it’s a fascinating world in itself, and one which I plan to put under the spotlight in this new series.

Since my background is primarily Field Target (FT) and Hunter Field Target (HFT) shooting, this first instalment kicks off with competition pellets. Before going any further, it has to be said that .177 is the only calibre worth considering for serious FT or HFT use, due to its flatter trajectory compared with all the larger calibres.

My heyday in FT competition was the mid ‘80’s, and whilst I meticulously kept a scrap book of tournament results, and the rifles used to achieve them, one omission which would have made interesting reading (don’t get stuck with me in a lift!) is the pellet design used. You see, over time, new designs come and go, and whilst they may incorporate only subtle changes from what went before, if they offer any advantage at all, then the most competitive among us will eventually be left with no choice but to make the switch.

With regards to bringing home the silverware, it soon became clear to us obsessive FT aficionados that pointed pellets, twin rings, double driving bands… etc, could all be consigned to the dustbin, Since the laws of physics dictate our sport from start to finish, there’s no denying the basic truth, that there’s simply been nothing to top the traditional ‘waisted’ dome-headed pellet for sheer all round performance.

The specialized requirements of hunting such as down range velocity and level of shock imparted to the quarry are of course a different matter, and one which we’ll discuss in a future part of this series.

Where downing field targets in the heat of competition is concerned there are three over-riding considerations, namely; raw accuracy; the ability of the pellet to ride or ideally cheat the wind to a greater or lesser degree; and of course as flat a trajectory as possible.

So the design which seems to come closest to satisfying these criteria, remains, as stated, the dome head (or Diablo) shape, incorporating the traditional ‘waisted’ body, similar in profile to a shuttlecock.

One of the earliest pellets to attain top level status in the timeline of FT shooting was the H&N Silhouette which was a comparative heavyweight, at around 9-grains in .177. These were followed by Bisley Magnums and H&N’s Barracuda Match - both at well over 10-grains. Whilst all three of these were superbly accurate, and took more than their fair share of trophies, the market was crying out for something lighter, which would fly flatter, whilst retaining a modicum of stability - ultimately the Holy Grail to the FT fraternity.

Bull by the Horns

Top German manufacturer, RWS, took the bull by the horns, and gave us the Superdome, which lived up to it’s name, and promptly became the top choice for a while. Haendler and Natermann (H&N) the other top flight German pellet producer came up with their own FT Trophy, and both these pellets are still produced to this day. Neither would be a bad choice necessarily either (especially for spring-powered air rifles), as both still offer great consistency and potentially, great accuracy. But times change and there are now many more brands from which to choose.

Defiant is a relatively new name on the scene, and is both extremely well made, and produced in good old blighty. Prometheus, the British company behind the operation, use a particularly specialized manufacturing process which results in highly consistent weights. Couple this with the fact that three head sizes are on offer, and these short bodied lightweights become an attractive proposition.

A distinctive parallel sided body sets the Defiant apart from it’s rivals, and with the manufacturers taking the unusual step of offering them in mixed sample trial packs too, testing can be carried out to see how they match with a particular barrel. At 7.5-grains, they manage to trim some trajectory from the long range targets too, and I for one plan some more in depth testing soon.

So what’s the best established pellet on the market for outdoor competition shooting? Well, as always, whether choosing a rifle or ammunition, look to see which brand is being used by the top exponents of the sport. Truth is the same names, just keep cropping up in the results!

At the top level, two manufacturers now dominate the scene, with pellets from the JSB stable (Josef Schulz Bohumin from Czechoslovakia), and Crosman (made in the USA), regularly slogging it out up and down the country.

Many manufacturers market their own branded pellets, which are made for them by JSB; with such companies as Daystate, Air Arms, and FX all getting in on the act. Daystate’s FT and Select labels, Air Arms’ with their Diablo Field, and FX pellets, as well as JSB’s own label ‘Exact’, are all remarkably similar when viewed alongside each other.

Now RWS have thrown their hat in the ring with the relatively new Superfield, which comes in at an identical weight to the JSB, of 8.4-grains, but seems to have a fractionally shorter body. Certainly another contender, but Crosman Premiers still take some beating with their ultra compact, short bodied, lightweight 7.9-grain design. A slightly higher antimony content (similar to Defiant) makes them harder and them less prone to damage in transit – it also gives these pellets a shinier finish.

To get to the top table, the latest pellets have obviously got to cut the mustard in the accuracy stakes, and expect at least half inch, 5-shot groups when use in conjunction with a quality rifle at 50yds, in perfect conditions - if you do your part of course!

Achieving ultimate accuracy is dependant upon many factors, however and it really is the case that the best rifle in the world just may not be compatible with a particular type of pellet. Barrels can be particularly sensitive, so if one brand isn’t grouping, try a selection and persevere.

With pneumatic airguns, barrel cleaning can be far more important, because, unlike spring/piston designs, no natural lubrication occurs. Again, it just depends upon the bore and there’s really no substitute for experimentation and doing your homework.

With many of the current pellet brands providing batch numbers and head sizes on the underside of the tin, the shooter can carry out further research as to which particular spec best suits their rifle. A 4.53mm head size will be fractionally tighter in the barrel than 4.51mm for example, and this might just be enough to get the best from the rifling, so experiment.

Finally, the golden rule still applies, that if you find a good brand of pellets that really suits a particular gun, try and purchase as many of the same batch number as possible to guarantee consistency. Confidence breeds success as they say.