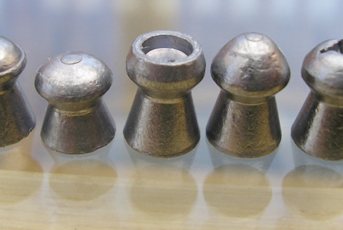 Better Choice Than Ever

The calibre’s popularity has of course been held back in the past with a very limited choice of pellet options available, yet in today’s market many more options now exist to devotees of the big .25. In my experience, live quarry taken with the larger calibre are taken more cleanly when hit in the right area. Under the spotlight here are five options from John Rothery’s stable, from two of the biggest brands in modern airgun ammo - Bisley and H&N – both of which are made in Germany by H&N (Haendler and Natermann).

At a whopping 31.02 grains, this is the heaviest of the pellets here. The long body, coupled with a solid head combine to give this design real clout. The head is technically roundhead, but not far shy of a point. Shooting the pellets from a Theoben Evolution just slightly under the legal limit, I managed groups well within a half inch over 25yds, and with superb weight consistency on test, it has to be a serious contender. The sheer mass of the Baracuda makes theswe the ideal pellet for FAC rated pre-charged pneumatics (PCPs).

By far the most versatile pellet in this line-up, this is a classic, short bodied round head diabolo design, suitable for all .25 calibre weapons. With a medium weight for a .25, it particularly suits spring power or gas-ram models, where the action has less pellet weight to overcome in the barrel. My Theoben just loved them, with ragged sub half inch clusters over 25yds, and 40yds! Given the compatibility, I took to the field with this one, and the results were excellent. Cleanly taken rabbits proved the point.

My test Theoben didn’t much care for these at all, but that’s largely academic, since kinetic energy readings dropped considerably with this one. That highly distinctive hollow nose could well lose energy more quickly than some, yet when shot from a compatible gun, with power levels set up for the job, the Pest Control would be a devastatingly effective hunting pellet. Weight fluctuation on test was excellent, and the best of the five here, making this design an exciting option, and well worth experimenting with. Probably best at FAC levels, to minimize the curved trajectory

Another long-bodied design, these solid performers come with a distinctive dimple in the centre of the head, and a prominent front driving band. Slightly more weight fluctuation from the test sample, but my Theoben still managed inch groups at 25yds. Again, the weight means the Superfield would be ideal when shot from many FAC rated pre-charged models. Visually, another very well made option.

This is a relatively new design for H&N, and another super heavyweight, featuring a cross cut into the solid head. The idea is that the pellet fragments on impact, causing maximum tissue damage and effect. Shot from the Theoben, 3/4inch groups were possible over 25yards, but again, the extra weight would pay dividends at FAC power levels, through PCP’s particularly. Consistency of weight was again impressive overall, while H & N’s usual manufacturing quality means the Baracuda Hunter Extreme is an extremely well formed pellet.