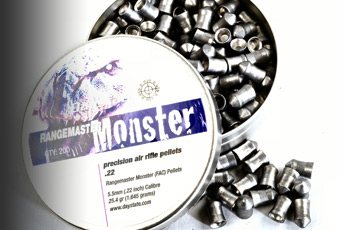 For most of the past year Daystate requested I test a trio of their Rangemaster pellets to ascertain there true capabilities, in the form of their Li, HE and Monster brands. Here’s what I found.

The Li has created a lot of interest from hunters to FT shooters. I don’t really see this as a lightweight but more now the accepted and traditional weight many airgunners seem to favour. In .177 calibre the target boys love them and in .22 hunters are beginning to switch onto them. Their trajectory is very predictable and it’s an easy pellet to get used to. Very reminiscent of their FT specials, they are made by JSB but Daystate own the dies so say the ‘Li will always be theirs.’ They aren’t my first choice but I used them successfully and with confidence throughout the summer and calmer days. But now winter is upon us I know it’s time to switch up to the next one in the family!

The HE is well named and is the ammo that’ll be zipping down my cold steel barrels over winter, especially should the weather turn breezy. Experience shows that aerodynamically they aren’t affected by wind as much as similarly weighted pellets. Daystate claim they’re designed to become the ultimate pellet for the shooter who will only accept the best. Independent tests with the HE have shown that they move up to 50% less than conventional pellets in the wind and have higher energy retention of over 25% on ammo of the same weight.

British-made, they are manufactured to exacting tolerances and are uniquely shaped along the lines of a domed head air bullet. My findings agree that they certainly seem to be affected less by a cross wind than similar weights and types and definitely do deliver a hefty downrange punch.

Tests show that these .22-only heavyweights release more energy than usual pellets now popular with high power FAC hunters, such as the Bisley Magnum due to the Monster having an energy retention that is at least 25% more than lighter ammo. They are also designed to leave fewer residues in the rifling.

Suitable for rifles that produce at least 30 ft/lbs of energy, the new pellet is highly suitable for all high power air rifles and ideal for the high power versions of the Daystate Air Wolf MCT/MVT as well as the Air Ranger in 40, 50 and 60ft lbs.
In profile they are a hybrid of a domehead pellet but with an air bullet styling for most of the body. A much specialised pellet it fills the niche for hunters using FAC rifles with a power output of 40 – 60ft lb. This is where they come into their own transmitting a mighty clout at the target and they’re highly accurate. Used thoroughly in my Theoben 30ft lb Rapid MkII they proved time and again they could easily take the sudden blast of air and when arriving at the target looked as if a rimfire had hit it!