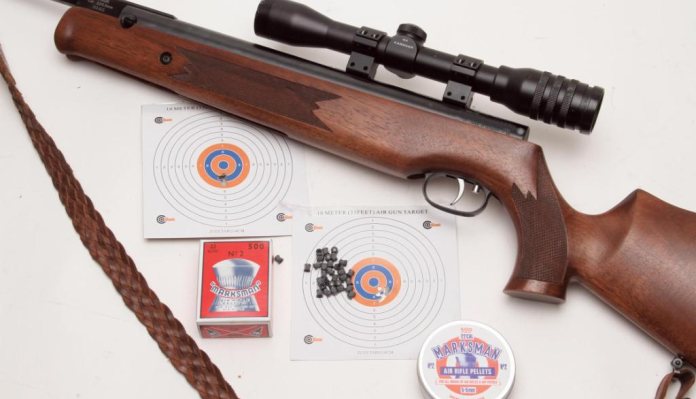 It is not everyone who wants a match-grade pellet for shooting their airgun, as the vast majority of shooters just enjoy their airguns for informal back garden plinking. I have probably shot more pellets this way than any other type of pellet. Also, with the rate I get through plinking or informal target shooting pellets, the cost is also a consideration too.

I remember as a lad saving my pocket money for a twomile cycle down to my mate Damon to go to Mike’s Bikes, who stocked Marksman pellets. These, as teenagers, were gold as I was concerned, as their red cardboard box had that lovely tangible feel of expectation to feed through our odd array of airguns. Then it was just about fun but I seem to remember those old Marksmans still shot well.

Today, an equally intriguing box, with an assortment of Marksman pellets, turned up on my door for testing and all those great memories started to flood back.

Marksman pellets have a long history and are still manufactured and owned by the great grandsons of George Lincoln Jeffries, inventor of the famous Lincoln Jeffries air rifle, the Brothers Lincoln David Jeffries and Alan Richard Jeffries. This business was first started in Birmingham’s Gun Quarter district in 1873 and produced air rifles as well as single and double barrelled shotguns.

In the early 1900s, they started producing a range of lead air gun pellets and steel flighted darts. They were named Lincoln, Target, Match and Bisley. It was not until the 1930s that the Marksman pellet brand were made, first as British Marksman and then just Marksman.

From the 50s, these Marksmen pellets had gained great notoriety and sales increased all all-round the world, specifically Canada, Australia and South Africa. So much so that by 1970 a total of 25 million pellets a week was needed to keep up with demand! I did my bit each week.

Today, Marksman air gun pellets are still made at Summer Road, Birmingham in the Lincoln Jeffries factory and supplies the UK and the rest of world, that’s some history.

Available in 100, 200 and 500 counts with 500 in a tin. These are your classic waisted pellets, with a low, sloping domed or rounded head. They have a waisted section also, dead centre of the length for good stability and there are characteristic grooves around the waist. The head section has the majority of the weight for a shuttlecock affect and the skirt has a nice even thickness for a good air seal. It’s what you think of as an airgun pellet and its design is thus that it with perform in a maximum number of air gun barrels.

Available in 200 and 500 counts with 500 in a tin, yellow label. These are not just a domed pellet with a point added. Here, the waist, as with the domed pellets, is grooved but the waist is higher. This then gives an even height between rear and front sections to incorporate the point. Overall length is 6.9 mm compared to the 5.64mm of the domed pellet. You have a good, uniform point profile and the skirt section is concentric but with a thinner wall compared to the domed varieties.

Available as 500 count and in tins only as 500. This is a mirror-image of the .177 but in .22 calibre obviously and has the same waisted design, with a good, quite flat dome that I like, as it cuts paper well for a clear score, or pancakes when connecting to a rabbit’s skull.

Available in 500 both box and tin. This has a very good design in my opinion, as the rear waisted section is quite hollow, with most of the weight forward and has a good thickness to the skirt section. The point is well-formed and not too long, so, when combined with the large profiled rear section, it adds in stability in flight and aids in accuracy.

Available in tins of 200 pellets. One of my favourites, as it works very well in my BSA Lightning Tactical .25 spring gun. They are quite light for a .25 pellet at 19.2-grains and so avoids the bug bare of many a heavier .25 pellet that of slow velocity. Here you have enough oomph to get the job done and they have always proved very accurate. You can also size these well in a pellet sizer, to maximise performance in your .25 air rifle.

I had a sample tin of 5.6mm pellet .22 size for largerbored air rifles and they are identical to the .22 waisted / domed .22 pellet but with a slightly larger head and skirt. Pellet weight range tested.

It was nice to reacquaint myself with the Marksman pellet range and I have to say I was impressed with the overall quality and consistency of them. There were some weight differences but nothing to worry about, as accuracy was not impaired at 25-yards. They were all a good fit to the barrels tested and all had a good skirt thickness that stopped deformation, yet expanded well to make a perfect air seal. I found all the pellets to give good accuracy, more than enough for plinking, as well as close-range hunting to be fair and it may sound odd but I loved those little cardboard boxes. The .177 round nose shot very well in the HW35E, as did the .22 version and the .25 Marksman were great performers in the BSA, which I use for ferals in barns.