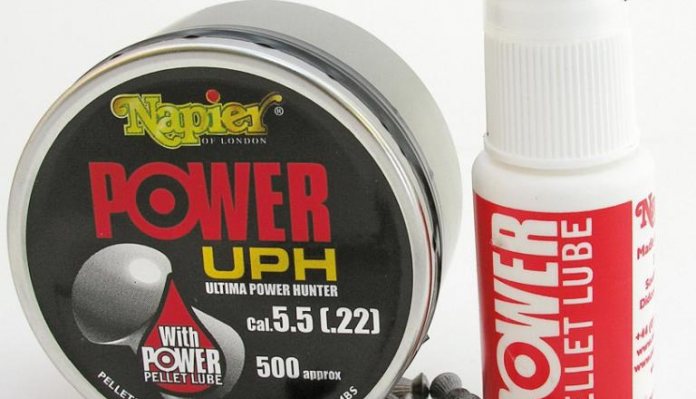 Napier of London have long had a selection of pellets on their airgun product roster, including the Power Hunters featured. However, as they’re now available in both popular calibres and criminally overlooked when first released, I’m now looking at them in much more detail.

Initially, it was the larger .22 slug that was launched, then it was eventually complimented by the .177; the latter being available in tins of 500, while the former was only offered in tins on 250. Although they’re a typical dome head (diablo) shape pellet and visually not that dissimilar to their- Power UPH projectile, they should not be confused with them. These are only available in .22 calibre and have a nominal weight of 14.5-grains. However, these are yet another pellet from Napier that are well worth considering, particularly for hunting use.

The Power Hunter Pellets have standard head sizes of 4.5mm and 5.5mm and weigh 7.72-grains and 15.42-grains for the .177” and .22” respectively. This puts them firmly in what is termed the mid-weight category, which is a size favoured by many for general purpose hunting and usage. These German manufactured projectiles come in screw top tins, which are pre-treated with exactly the correct amount of Napier Power Pellet Lube (PPL) at the final stage of packaging. This application ensures that they don’t oxidise during storage and can be used with confidence ‘straight from the box.’

Napier also meticulously check the pellets to ensure that they’re all graded to exacting standards of weight, head, waist and skirt size. On close inspection, they’re obviously extremely well manufactured and come from a very high-quality die. Fired from springer or PCP, they’re highly accurate and I found that they suited all popular magazine systems I tried them in. Our Editor Pete Moore runs the .22 slugs in his 30 ft/lb, FAC-rated FX Wildcat Bullpup with no problems at all and good performance.

As I’m sure many airgunners are aware, it always pays to try any quality brand of ammo that you’ve not previously considered. So, in that respect, I highly recommend you try Napier’s Power Hunter Pellets out and see for yourself if they suit your rifle for optimum performance. To facilitate this, they also offer what is known as the ‘Pellet Pack 100+’. This sampler contains 35 pieces of all the .22 calibre pellet types in their range. As expected, each is pre-treated with PPL and packs also contain eight, official Napier 10m targets, ideal for initial testing. For those totally unfamiliar with Napier slugs, the Power Target Pellets included in the pack are a flat head (wadcutter) design and, like others here mentioned, are top-quality German manufactured lead.