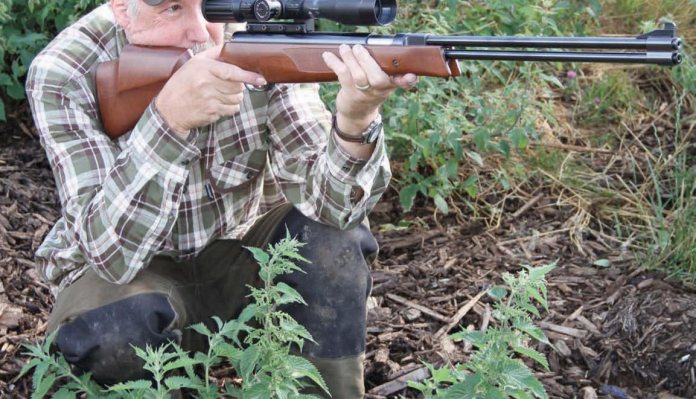 I certainly have an interest in odd calibres and wildcats in centrefire rifles, which is probably unhealthy but hey-ho, this also transcends to my airgun hunting too. I love the big hitting .25 calibre, both in 12 ft/lbs rated guns and FAC versions but the .20 cal. still is my favourite!

Trouble is, pellet choice is still limited, although better than when it started. Worst still, manufacturers still just put a .20 cal barrel on an existing air rifle. This is set up for either the .177 or .22, and especially if a springer, the .20 cal will not perform as well as it should. Spring gun shooters know that putting a .177 spring in a .22 increases power, too much in most cases but most off-the-shelf rifles do not have a .20 cal specific or tuned spring/action. Which results in new .20 users being a bit disappointed with their purchases.

PCPs are far better in this respect, as are gas rams, as they can be altered easily to adjust power but springers need to go the strip and tune route.

It is always said that a .20 cal pellet, ‘’shoots as flat as a .177 and hits like a .22”, well that was the advertising blurb. It’s not quite that simple, whereas a .20 cal centrefire bullet for the same weight as a .224 or .243 bullet has definite advantages due a better Ballistic Coefficient (BC). However, for retained down range performance, with a .20 pellet at lower velocities and closer range, it’s not that clear cut.

People think of the .22 mainly as a hunting round and the .177 for target calibre and it is a bit of a shame, as the .20 rather than being the compromise calibre, could be your best bet between the two. I have shot quite a few .20s and own several, including FAC-rated guns. Here’re some of the results with differing pellet/rifle combos used over the years, gas ram, springers and PCP.

I will conclude with a new Weihrauch HW77 in .20 cal I bought from Mark Sinclair from CH Westons in Brighton, which clearly explains the .20 cal conundrum. Accuracy is never really a problem but as stated before, power levels can be, although some barrels are tighter than others, so not all pellets fit correctly therefore greatly affecting performance.

PCPs work well in .20 cal, as they can be easily set up to optimise the differing weights for the barrel diameters used. I liked the older Venom custom Viper. This .20 calibre custom was tuned perfectly, well it is a Venom! Here it shoots its best pellet combo of Field Target Trophies, FTTs, which Steve Pope made a pellet sizer for me, which actually expands the FTT’s base for a perfect skirt–to-bore fit and impressive down range performance.

These pellets can clover leaf at 30 yards all day and achieve 657 fps/11.1 ft/lbs. This is the only PCP I own and I keep it because it’s a Venom and in .20”. I also had good results from an old Theoben Sirocco. The Crosman Premiers were very tight in the barrel and needed a bit of cajoling, weighing 14.31-grains they gave 607fps/11.71ft/lbs but with poor accuracy. However, the lighter, 13.28-grain Barracuda Match were making 589 fps/10.23 ft/lbs with best accuracy at 30yds of just under an inch. The Superfields at 705fps and the lightest pellet at 11.36 grs were less consistent but OK for practice, a shame as they were the fastest and flattest in trajectory.

My favourite .20 has to be the V-Mach switch barrel rifle Steve Pope made for me. It started life as Venom Sidewinder .22 with grade 4 wood in a thumbhole configuration. But Steve made a .20 cal fully suppressed barrel for it and tuned the action for perfect .20 cal and .22 cal pellet performance and illustrates the power drop from .22 to .20 cal for the same spring fitment.

The lighter JSB or Daystates would be my choice, as their respective velocities were 569.7 and 565.4 fps developing just shy of 10 ft/lbs. The heavier Penetrators were more efficient with a lower velocity of 546.2 fps/10.5 ft/lbs. Highest velocity went to the 9.66-grain H&N Diabolo Sports with a cracking 714.4 fps/11.0 ft.lbs. However they were quite a hard and gave a poor 1.25” groups at 35 yards - not good enough!

This new HW77 shows how the .20 cal usually comes a bit below power but this does not stop it being superbly accurate. In fact that’s the point, as most people will be happy with the performance and to me it is only a simple retune with a different spring, top hat and compression rings to the spring guide to achieve the power level you desire. This HW77.20 is so good I bought it and its going to Steve Pope at V-Mach for a V-Glide tune and sound moderator fitment and complete re-blue.

I tested the HW77 for velocity and energy and to discover the BC values for each pellet by measuring the velocity at the chronograph and then at exactly 20yds. A calculation then determines the BC using the G1 form calculation and gives a good indication as to the best or more aerodynamic makes available. This was then fed into Hawke’s excellent BRC ballistics program, to determine down range trajectories.
This next table shows the retained velocity and energy down range with a typical .177 and .22 pellet and the tested FTT pellet at HW77 or typical velocities and those from a theoretical full power tune i.e. the same as the .177 and .22. Now you see how the .20 calibre can be a real advantage if the rifle was set up for it to shoot to its true potential.

First up, the .177 and .22 are still great choices for most people, I favour the .177 but a lot of the data shows that the real advantages of a better BC is only realised at extended range. I think most airgun hunters will not really notice many differences in performance and really the accuracy of the rifle is far more important than sheer BC advantage.

You also have to remember this is in one rifle in one set of climatic conditions that will make a difference to the BC and therefore down range performance. However, if you are a calibre geek like me, I still like the .20”; especially after seeing how it would perform if manufacturers set their rifles to shoot it correctly to the same power levels of the .177 and .22 cals.

There were four good .20 cal pellets with good BCs but I still think the Field Target Trophies are the best all-rounder. The results actually proved it and if that HW77 was at 12 ft/lbs, wow, so it is definitely being tuned by V-Mach in the future.