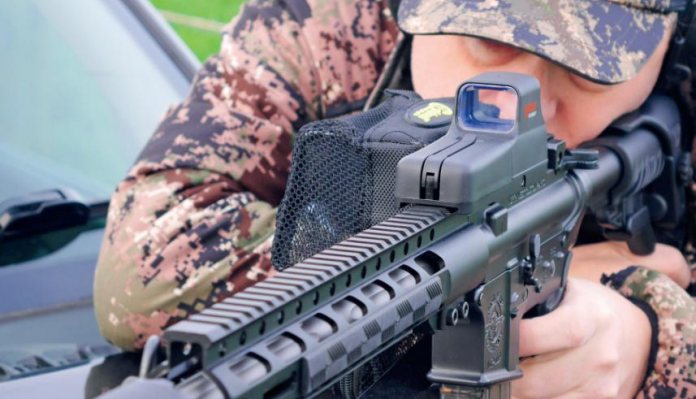 In a former life, I used to spend a fair bit of my time in armoured vehicles, with the taxpayer kindly providing copious amounts of ammo for the co-axial General- Purpose Machine Gun (GPMG). I was often asked to turn it into loose links and empty cases with the best combination of speed and accuracy I could muster. In case you hadn’t already guessed, this was a lot of fun.

By contrast, grubbing around for brass and links in every oily, muddy crevice of the vehicle afterwards, was not. Fortunately, HMQ supplied us with a big canvas bag to hook under the gun, making the whole ammo-into-noise/targets-intoribbons business just as it should be: universally agreeable.

I later learned that brass catchers have also been used by soldiers on ‘black ops’to avoid seeding hostile ground with tell-tale cartridge cases. More recently still, I have seen them adopted by heliborne pig hunters, presumably on the basis that rotor blades, flight controls and human faces all function best when not having cases flung into them.

As I hand-load all my centrefire ammo, and because I am both tidy-minded and no fan of recovering spent brass, I have recently acquired brass catchers by three different manufacturers. Whether on the range or in the field, I find them a great asset, as they prevent carefully-uniformed centrefire brass from being lost and keep rimfire cases from littering the landscape.

First up is a design from US firm E&L Manufacturing. They make dedicated catchers for a huge range of rifles, carbines, SMGs, shotguns and pistols. All use a rigid box made from black Kydex, which is either clipped-on or rail-mounted, depending on the gun.

Catchers for guns with a Picatinny optics rail, mount to the gun via two pins, each of which clamps into a different slot in the rail. The pins then slot into corresponding sockets in a bracket mounted to the box. Thereafter, a balldetent in the bracket and a series of stops on the pins lets you position the box neatly alongside the rifle’s ejection port. You can also choose to mount the bracket above or under the roof of the box, thus setting the opening higher or lower in relation to the rail. When you want to clear the action or empty the box, you just pull the box off the pins. Also welcome is the fact that spare pin sets are available, allowing for the box to be switched easily from one gun to another.

In designs for guns without a rail, the box extends over the top of the action, and the Kydex is moulded so the catcher is a clip-on fit. This is the case with the version I bought for my Steyr AUG, which slides on over the rear body of the rifle to cover the ejection port. It’s a simple system, and in the event of a malfunction or the need to clear the rifle, all you have to do is to slide the catcher to the rear to expose the port. The catcher does have to be removed entirely for emptying, however.

There is a ‘small’ problem with my AUG brass-catcher, though. It’s no good if – like me- you shoot left-handed! This is because the AUG’s charging handle is located forward on the left-hand side, with the result that the box, when mounted over the left-hand port, gets in the way as you reach for the charging handle. Of course, when shooting right-handed everything is hunky-dory.

If you’re an AUG owner to whom authenticity matters more than mere functionality, Steyr themselves do a mil-spec “hülsenfangersack” (i.e. brasscatcher), part #1-HW-09012 (about £90). This comes in OD green and has an extended clip-on action cover and a fabric bag for the brass.

The above are specialist solutions for specific weapons, but a couple of big US firms, namely, Battenfeld Industries (Caldwell) and Lyman (Tac-Star), have recently got in on the act with both Picatinny-based and universal models.

Battenfeld were first on the scene a couple of years ago with their Caldwell Pic-Rail brass catcher (Sportsman Gun Centre £61.00). This is based around a rigid wire frame, to which a mesh bag -reinforced with ballistic nylon where the ejected cases hit it- is attached by hook-and-loop strips. Double wires above the mouth of the frame mount a ‘female’connector, which is free to slide along them (until nipped up with a small hexhead grub screw). This connector slides over the top of a male counterpart clamped to the gun’s optic rail by a screw-fastening clamp. A ball-detent keeps the catcher in place. This design permits the bag to be aligned precisely with the ejection path and keeps its mouth squarely open to receive the cases. The mesh bag holds up to 100 5.56 cases, helps the brass to cool and makes it easy to see when the catcher needs emptying. This is done by opening a zip at the bottom. Spare mounts are also available at £22.00.

It’s a very good design but there is room for improvement in two areas. First (and least), the grub screw for lateral adjustment is tiny and quite hard to get at; and second, the overlap between the male and female connectors occurs above the rail, requiring 3/8” clearance under the scope. This is too much for my 34mm- tubed Minox tactical scopes in their medium-height Tier One rings. I didn’t want to re-equip with higher rings, so this had me looking for yet another design.

My first thought was to go for Caldwell’s new ‘Universal’ model (£40.00), which is designed for guns without a Picatinny optics rail. Instead of a fixed connector, it has two Velcro straps to secure it to the forend and is supported by a sturdy metal bracket complete with a hinge that lets you pivot the bag away from the receiver for loading/clearing. The flexibility of this was appealing, but as I regularly use fore-end-mounted remote controls with thermal or NV, and night shooting is when I most appreciate the benefits of a brass catcher, I figured that piece of real estate was already taken and decided to look elsewhere.

Lyman joined the brass-catcher party in 2018 via their TacStar brand. Now, TacStar isn’t necessarily where I’d start looking for tactical accessories, but their brass catcher (Parabellum Consulting, £36.00) absolutely solved my problem. Why? Because the connector sits flush with the top of the optics rail thanks to a central cutaway in the male connector that fits over one of the recoil arrestor bars on the rail and allows the sides to fill up the adjacent slots, and the interface with the bag is offset to the ejection-port side. A screw-fastening clamp on the offside locks the connector in place, whilst a ball detent on the projecting near side takes care of the bag.

Like the Caldwell, the TacStar’s bag has a metal frame, but it differs in being made from a closed-weave heat-resistant Nylon fabric, which requires the presence of a flat metal ventilation grille on top (which doubles as a brass deflector). An additional slot in this grille is used for adjusting the position of the bag, but the range of movement is less than with the Caldwell design. The Tac-Star catcher also lacks a zip for quick emptying, although the bag is a bit bigger, with a nominal 120-case capacity in 5.56, and it attaches to its frame via press-studs rather than Velcro, making it a bit easier to remove for cleaning. Spare mounts are also available, retailing at around £14.

Barring Steyr’s mil-spec catcher for the AUG, the E&L catchers are the priciest but are the only game in town if you have a bull-pup or require a gun-specific fit. The Caldwell, meanwhile, is the best overall design, only falling short in the Pic-Rail version with a scope mounted low to the rail. Tac-Star solves this problem, but visibility and adjustability are reduced, plus it is a little slower to empty. So it’s a case of horses for courses.

Before closing, I should mention the simpler, cheaper and more ubiquitous type of catcher that attaches to the rifle via a Velcro band, and features a mesh bag supported by a wire loop. In my experience, these suffer from two major issues: the tendency of the mouth of the bag to close even under its own weight, let alone when burdened by brass; and the ease with which the catcher slips out of alignment with the ejection port. Because Caldwell’s gear is usually strong on design, I was surprised when they introduced a catcher of this type (£19.99), so maybe it’s better than its lookalikes, but I don’t see how. My advice is to spend a bit more for a better product, and enjoy all the benefits of keeping all your prized brass clean, safe and collected!