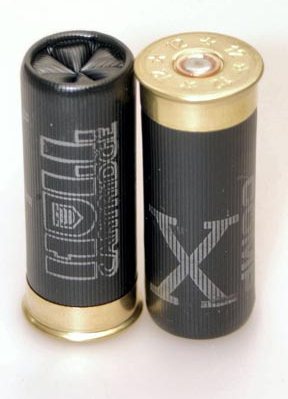 I know this is a cartridge review but listen up. When Mike Haw from the Hull Cartridge Company handed me these brand new cartridges he accompanied them with some extremely pertinent and well aimed views. For quite a while steel shot has been regarded as the saviour of shotgun shooting on both price and environmental issues.

Now whilst steel and other non-toxic shot works, it’s becoming more and more noticeable how many grounds are declaring an outright ban. Reason; steel shot ricochets. Equally if the nearby trees are to be used as a cash crop, embedded steel shot causes untold problems. The obvious answer is a high performance cartridge that places less lead in the air.

Delivered in a black and silver version of Hull’s familiar Comp-X range, complete with the usual minimal information band, the new 21 gram load now signifies the company’s switch to Cheddite cases. Shorter in appearance, each cartridge measures an exact 52mm inclusive of the 7mm brass head. Overprinted in silver, the cases are finished off with a deep rolled six-point crimp.

Internally a deep two tier cushion, four-split plaswad sits over an average 1.11grams of green and bronze disc cut propellant of as yet undisclosed manufacture. I could take an educated guess but won’t; Hull are currently in the process of changing certain aspects of their entire componentry.

Shot wise over three randomly selected cartridges the average number of 7½’s was 283 with two misshapes in each. Where the new 21 gram load did impress was when chronographed and patterned. Ten rounds shot in two batches of five recorded a mean average observed velocity speed of 1,246 fps at ten feet. Similarly the resultant pattern at 30 yards through a Marocchi A12 fitted with ¼ choke displayed a 94% total pellet count with a near perfect distribution of 51% and 49% in the inner and outer circles, not the slightest hint of bias or concentration.

At times though, facts and figures count for nothing when the clays are flying and scores need to be maintained so it was around Huntroyde’s small sporting layout that these 21 grams had to prove themselves. What I can confidently report is that there is no difference to the end result, each target broken, irrespective of direction, distance or speed, was despatched as convincingly as any equivalent 28 gram round, overall performance exactly what you’d expect from any high-end competition cartridge.

Where a marked difference can be felt is at the gun, the sensation being that of a trainer load, the recoil felt through the Marocchi was verging on non-existent. This again is important, as some smaller loads are incapable of recycling semi–automatic shotguns. Irrespective of whether the valve was set to heavy or light, the 21 gram Hull Comp-X drove the gun’s action with authority.

In Hull’s new 21 gram competition load, not only has lead quantity been significantly reduced, its tangible proof that a full–blown competition load can be built that’s suitable for beginners, experienced shooters and nearly every type of 12 bore shotgun. Also, at £125 per thousand, I’ve yet to find a single negative.