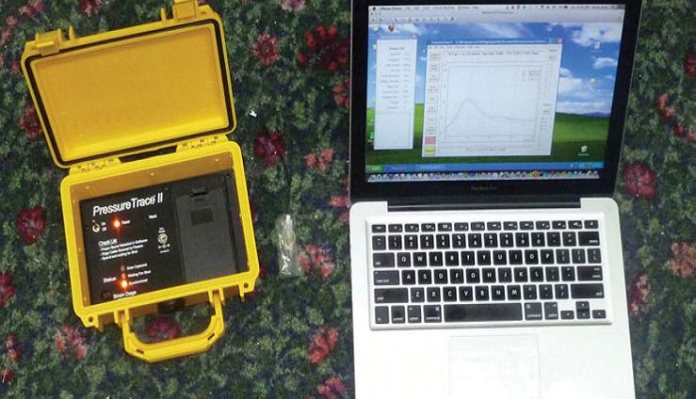 Over the years, we’ve made a number of simplified forays into the world of external ballistics… the pill’s grim progress beyond the muzzle. This month, we’ll back track a bit and look at the start of its journey, as it fights its way out of the case and up the bore. Or in other words; interior ballistics, made relatively easy.

The process starts, not with the detonation of the primer, but when the round is chambered and then covers every event up to the point where the base of the bullet exits the muzzle – plus a sort of grey area thereafter! Chambering the cartridge establishes a number of factors that will influence what follows. The headspace, general fit in the chamber and the position of the ogive in relation to the lands (leade) all have a part to play.

Moving to the actual cartridge, factors include the case volume under the base of the bullet; the volume of powder within that space (the load density); primer brissance/ energy; the temperature, burn rate and deflagration curve of the propellant; the diameter, weight and bearing length of the projectile (from which we deduce Sectional Density or S.D.) and its neck tension. Then we consider the barrel volume (usually measured from crown to base of the chambered bullet) and the rifle freebore and leade (as noted above). That’s a shed full of variables, with many being inter-active. So, without all the maths, let’s try and make sense of them.

Putting the events in order

Pulling the trigger launches the firing pin and the primer explodes. The chemistry and volume of the priming compound will determine the nature (brissance) of the jet that exits the flash hole. The density of the propellant column (volumetric ratio of air to powder in the column) acting upon the penetration of that jet. The load density (for a given propellant) impacts upon the resulting pressure spike, as the deflagration process gets under way, or; the ‘fuller’ the case, the sooner the resulting gas pressure gets to work. Here, we must consider the position of the base of the bullet, as this directly influences the load density. Influencing this process is the case fit, poor headspace and general case fit taking gas energy to fire form to the chamber.

Neck tension now influences the first pressure spike. The second spike reflecting the engraving of the bullet as it enters the lands and engages with the rifling. If there is no bullet jump (the ogive having engraved the lands when the cartridge was chambered) then there is just one, higher and possibly dangerous spike. The gas pressure now deals with the mass of the bullet and forcement; the resistance of the bullet in the bore from acceleration against the rifling twist and friction between the bullet and the barrel. The greater the forcement, the greater the cartridge working pressure.

In an ideal world, the ‘all-burnt’ point of the propellant occurs just as the base of the bullet exits the muzzle, with the maximum amount of gas energy transferred to the bullet in the form of velocity and rotational speed. That’s in the range of 98 to 100%. Any earlier and the forcement and gas pressure reach equilibrium, slowing the bullet thereafter. Any later and the resulting muzzle flash indicates wasted energy.

As the base of the bullet exits the muzzle, the residual gas pressure behaves like the uncorking of a champagne bottle, releasing a cone of gas that can continue to accelerate the bullet for some centimetres. In large bore artillery pieces, this gas cone effect can continue to accelerate the shell over tens of yards from the muzzle. It is during this phase that any imperfections on the base of the projectile will have the greatest impact upon consistency.

To measure the pressure being generated, we would need to install our test cartridge into a specially prepared chamber of exactly the same dimensions as our rifle. In this first pressure measuring technique, a hole is drilled in the chamber and a piston fitted that presses on a calibrated copper slug (or crusher). (Some set ups also drill the cartridge case, which changes the results compared to non-drilled cases.) What we get is CUP or Copper Units of Pressure, which by equation from the deformation of the slug can be translated into case pressure in PSI. A second system employs a reusable piezo electric transducer that creates an electric pulse that mirrors the extent of its pressure deflection. Again, the output can be converted to PSI A, although the two outputs for a given cartridge are not totally identical, as the spikes are better interpreted by the piezo… leading to higher figures and a safer interpretation of real events.

Powley or one of his electronic children? As we said, lots of variables of widely differing importance. Now, we could sit down with a pen, paper and a calculator, prioritise the variables and do a huge amount of calculation to establish what powder, charge weight and bullet will give us the desired safe output. Then buy a CUP or piezo system, to verify our calculations. Veteran hand loaders, especially those brought up with IMR powders, will simply reach for their 1960’s Powley Calculating slide rules, to work up the charge, velocity and pressure data they need. For later fans of Powley, there is a modest web version to be found at http://kwk.us/powley.html However, a SERIOUS warning is that you should read and understand the caveats that are appended to the web page before playing with the computations. Plan B, is to use a suite of software that incorporates the Powley equations but also houses a mammoth database of calibres, propellants and projectiles. My version of QuickLoad is geriatric, being one of the first editions, but the current v.3.9 does a monster job of crunching the numbers. If you’re planning on loading ‘outside the box’, then this will save you hours of development work and pounds of expense on unsuitable pills and powder.

Some elements within this material were originally published and copyrighted by John Schaefer, at www.frfrogspad.com/loaddev. htm, and are used here with permission. QuickLoad – JMS Arms; www.jmsarms.com/quick-load