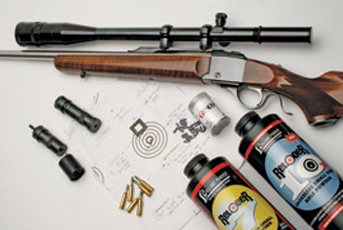 Small calibre’s really get the old juices flowing and despite what some uninitiated people think they have a real place in vermin control in Britain today. More familiar to us are the .17 calibre rounds such as the HMR rimfires or the Ak Hornet, Fireball, Remington and Hornady`s new .17 Hornet. However since the late seventies a chap from the States called Bill Eichelberger has produced sub calibres from .14 diameter, in fact .144, .12 ( .123) and even the diminutive .10 ( .103 ) bullet diameters, that’s tiny!

Bill designed a series of cartridges to shoot these projectiles that look no larger than a stout mouse dropping in cartridges ranging from reformed .22rimfire cases, necked down .25 pistol brass right up to the totally disproportionate .222 Rem Mag as used by the .204 Ruger round.

Ten calibre loads such as the 10 Eichelberger Squirrel is based on a shortened Hornet case and will shoot a 7.2-grain bullet at nearly 4000 fps with only 6.5 grains of powder. Similarly the 12 Eichelberger Carbine based on a .30 Carbine case can send a 10-grain bullet at over 4350 fps with 13 or so grains of powder. That’s very fast and frugal on the propellant but problems really lay in projectile quality, or more importantly consistency and trying to keep the bore clean. .103” is a tiny hole to try and get a cleaning brush or jag down which is why the more practical, relatively speaking is the .14 calibre cartridge variants.

To me the .14 Eichelberger Hornet or the earlier .14 Walker Hornet round designed by David Walker based on a .22 Hornet case with the neck reduced and body taper straightened or improved makes more sense.

Sourcing all the relevant materials needed to fabricate let alone feed such a rifle can be problematic, but as luck would have it I knew a chap called Dennis who was selling a .14 Walker Hornet based on the Ruger No 3 action. Being a single shot rifle it suits the .14 Walker Hornet as trying to get these small rounds to feed reliably can be a problem with rimmed cases.

The forend was reworked with a tension screw through the bottom to allow you to achieve a perfect tension on the stock screw to the securing hanger to optimise accuracy. The real gem was the stainless steel barrel sourced from the States from Lawrence Barrel Works who specialise in .14 or smaller barrels although www.pac-nor.com also now offer .144 tubes. The profile was pure sporter at 24” and a rifling twist of 1 in 8.75” that seems a little fast but which is necessary to stabilise bullets of this size, weight and length.

In total there are four forming dies to reduce the neck diameter down from the 22 Hornet brass to that of .144 inside diameter (ID). You need to lube between each swaging procedure, to avoid bent, collapsed or stuck cases and annealing is highly recommended, I use a WoodChuckden Annealer. You now need to fire form or blow out the case in the rifles chamber to achieve the improved profile.

But first because of all that case neck reduction means the brass has thickened around the neck area so it will not chamber. You now need to neck turn, again on specialised K & M or Sinclair neck turners to achieve a 0.166” diameter (i.e. 11 thou per neck side); so that when a bullet is seated you have an adequate clearance between it and the chamber walls.

amber walls. I used a Wilson rotary cutter from Reloading Solutions to trim the length to fit the chamber and then deburr inside and out of the mouth so as not to score the bullet on seating.

Finally you can load your first .14 case and fire form it in the chamber to achieve the final Walker Improved shape. Specialised reloading dies from Neil Jones in the USA make sets of de-capping/full length or neck sizing and bullet seater dies to your rifles specification. These are usually hand dies and need the use of an Arbor press (again Sinclair), they give a better degree of ‘feel’ or precision when reloading small calibres that I have found over the normal threaded die sets. I used a fire forming reduced load of 9-grains Reloader 10X, which perfectly reconfigured the brass and hey presto one .14 Walker Hornet case.

Great care has to be taken when reloading any small calibres as the minute increase in powder charge can cause pressures to sky rocket. Getting the powder into the tiny .14” neck is tricky too! I used a Harrell pistol powder measure that deals with weights from 0-25 grains and when combined with a .14 powder funnel between the delivery tube and case and a bit of gentle ‘twirling’ to create a vortex flow, I managed to fill the cases. Bullet seating too is fiddly as .14 calibre bullets can range from 10 to 18-grains which are .22 air gun pellet size!

Faster burning powders are best in small cases but ultimately at risk of accelerated bore wear over time, particularly down that tiny tube. Typically Alliant Reloder 7 or the newer Reloder 10 X powders have worked well in .17 AK Hornet and .17 Squirrel cartridges I have used.

I had a small, supply of 10.5 and 12.0 grain Lucas and Accuracy Supplies bullets. Both being lead core copper jacketed types with small hollow point meplat. I used Quickload Ballistics program as a starting point, and a load of 9.5-grain of Hodgdon H4198 powder under a 10.5- grain bullet and ignited by a Federal small match primer yielded 4011fps. An increase to 10.0 gave 4207 fps and 413 ft/lbs with a top load and pressure of 10.5-grains and a whopping 4283 fps. Accuracy was ok 1.5“ at 100 yards but nothing to write home about. The 12-grain bullets fared better with 1” groups and a top load of 10-grains of Vit N133 gave 4023fps and 431ft/lbs energy from the 24 “ Lawrence barrel.

Best accuracy and consistency however came from the 15-grain molly-coated Genco hand- swaged bullets which are beautifully made with a true hollow point design. Trying to pick them up is hilarious and whilst reloading from the ‘Reloading Hut’ in Scotland the draft from the shooting window kept blowing them all over the table!

10-grains of Reloder10X under a 15-grain Genco pill and primed with a Federal small match primer shot an average of 3203 fps over the chronograph to produce 342ft/lbs energy. Still a bit slow so I upped the charge by one grain only to 11. There was a big increase in velocity to 3484 fps and 404ft/lbs energy, that’s 281 fps increase with only one grain extra. The case was becoming full so I squeezed 12-grains in and sent that Genco flying at 3834 fps and 490ft/lbs, that’s more like it.

Accuracy for each of those loads shot sub-1” at 100 yards with the occasional flier, small bullet defects or reloading technique are magnified and found out at this stage of the game.

I still wanted the magical 4000 fps velocity and so changed to the faster Reloder 7. This time I started straight at 12-grains as all previous loads where not showing any pressure signs but you could not get any more powder in the case anyway. This recipe screamed across the chrono at an average of 4004 fps and 534ft/lbs energy, giving a cool 0.5” at 100 yards.

I had no 17 grain bullets at this time so they would have to wait for another day and, hooded crow.

The .14 calibre 15-grain hollow point at over 4000 fps is a very safe round to shoot as it is highly frangible and deadly on game too. The 15-grain Genco is dynamite on hooded crows and rabbits with instant expansion and lethal results. I would not use them on foxes although I suspect a head shot would be ok. On rats, feral pigeons or squirrels the 12-grain solids act like air gun pellets and go straight through with little expansion so ground shots only but the hollow or soft points, how can I say this tactfully, are very very humane!

With a muzzle can fitted you actually feel the rifle “jet” forward on the shot as the muzzle blast hits the first blast baffle, absolutely zero recoil or muzzle flip so all the hits can be seen. Only problem is that in a stiff breeze well actually anything over 8mph, causes the small pills to drift and they soon lose their momentum beyond 150 to 175 yards. I have had some great 200 yard shots but would not recommend them.

The only problem is cleaning the damn thing as .14 cleaning rods bend easily and brass jags are just small slithers of brass and are easily damaged or lost. At 4000 fps I had to clean after 15-20 rounds otherwise accuracy tailed of a tad although the moly coating certainly helped but that was bearable due to the enormous pleasure shooting the rifle gave. It may not be ever body’s cup of tea but if you enjoy reloading and experimenting with wildcats or odd cartridges then a .14 calibre may just be up your alley.