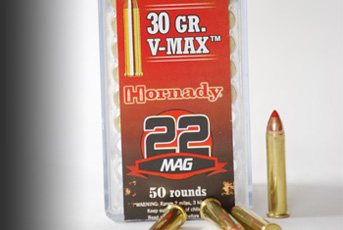 Regular readers will know I’m very much a fan of 17HMR (Hornady Magnum Rimfire), but recently and out of the spirit of fairness and interest I have been investigating its predecessor the 22 Winchester Magnum Rimfire (WMR) or 22 Mag as it’s also known. The culmination of this will be a back to back test between my Ruger M77/17 All-Weather and a 77/22M of the same spec. Both rifles will be shot at practical ranges on frangible targets and hopefully I can do it on a still day then a windy one to test the full spectrum of each calibre.

For the WMR Edgar Brothers Ltd supplied a cross section of Remington fodder and also the newest loading from Hornady the 30-grain V-MAX. Weight-wise this is the lightest and fastest of the 22 Magnum offerings so I thought I would see what it can do. I will be looking at the Remy in the near future too.

The test gun was a Ruger 77/22M All-Weather with a medium weight, 24” barrel and wildcat Growler, reflex moderator up front. Stripping down a cross section of ammo showed the flat base V-MAX to be cock on the quoted weight at 30-grains. Powder was an ultra-fine spherical ball at a consistent 7.5-grains; this is a lot of propellant for a light bullet.

Hornady quotes the following figures for this load:

Over the chrono the Ruger was achieving:

Overall acceptable figures and much as I surmised and at the muzzle at least 50 ft/lbs more launch energy than a 17-grain, 17HMR V-MAX load. Accuracy at 100-yards came in at a best of ¾” with the load keeping it consistently below the inch anyway.

In the field this translates into a capable cartridge that is more than able to give solid head shots out to 100/120-yards in the right conditions. However, how does it compare to the 17-grain HMR load?

Given what I do, I see the maximum range of the HMR as 170-yards on a good day, so; say 160 to be safe. Let’s face it with either rimfire magnum initial engagement is around the 100-yard mark or a tad less, below that it’s wasted and a bit of an over killer for body shots. That’s why we have 22 long rifle for sub-80-yard work… So let’s look at the figures for these two distances.

As can be seen the Hornady WMR load just aces the HMR at both distances though from my research is not shown to be quite as accurate nor as wind friendly. The decision as ever will be split, but if I had to come down on the side of the 22 WMR then I’d say that the extra bullet weight should pay dividends; especially on foxes…

We Reckon
• For: Fastest 22WMR to date
• Against: Not as accurate as a comparable HMR
• Verdict: Good choice for the 22 Magnum hunter