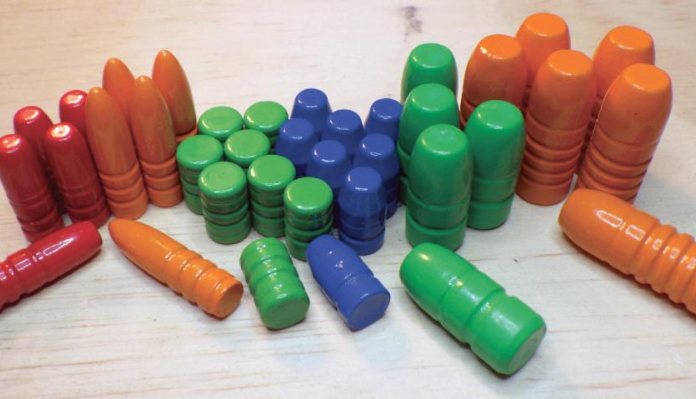 With the unfortunate rise of the health and safety obsessed culture, the ‘dangers’ of things we have been doing for decades are constantly being highlighted and put into question. One issue that seems to be getting a bit of attention is the amount of lead we are exposed to through shooting. Lead bullets have been used since the very first firearms were invented and those shooting them have been exposed to lead every time those guns were fired. Although many rifle bullets are copper jacketed, so almost eliminating the amount of lead released into that atmosphere, lead bullets are still very common in pistol calibre guns and of course black powder guns. Jacketed bullets are considerably more expensive than plain lead types so cutting your lead omissions can be costly. One possible answer is to use powder coated bullets, a very common practice in America, but something that is still in its infancy over here.

It is possible to powder coat your own bullets, which involves coating and then ‘cooking’ them to set the coating, but that is a whole subject on its own and will not be explored further here.

The advantages of the powder coat

When bullets are powder coated the entire surface is encapsulated, including the base, so none of the lead-alloy is visible. Contrary to popular belief lead cannot be absorbed through the skin, so anyone who says the powder coating prevents the abortion of lead through your fingers while handling bullets is incorrect. If, however, you handle lead, and then eat with your hands or put your hands in your mouth, lead can be ingested and absorbed into your body. Needless to say, if you are daft enough to do that then perhaps you should not be reloading in the first place. Despite the fact that lead cannot be absorbed through the skin there are benefits to wearing latex gloves while handling lead bullets, to prevent lead being transferred elsewhere and also keep the lube off your fingers.

By far the most significant advantage of powder coated bullets is that, when they are fired, the coating prevents lead being released into the atmosphere due to the friction between the surface of the bullet and the bore of the gun. With uncoated bullets this friction vapourises a significant amount of lead which is then thrown into the atmosphere as part of the muzzle blast. The lead in the air can then be breathed in and absorbed through the lungs. The lead will dissipate somewhat outdoors but indoor ranges should have sufficient ventilation to move it away from the shooters and prevent it from accumulating.

Another advantage of powder coated bullets is that there is no sticky lube on the bullets so they are cleaner to handle and dust and dirt doesn’t stick to them. The whole reloading process is cleaner and there is no contamination of the dies and no need to wipe excess lube off the finished loads.

When it comes to reloading with powder coated bullets the big difference that you need to consider is that the coating increases the diameter of the bullets, for example a 30 calibre bullet with such a coating will be supplied at .309 calibre instead of the more usual .308. This increased diameter must be taken into account when seating the bullets otherwise the powder coating will simply be scraped off the sides of the bullets by the case mouth. This is achieved by increasing the amount of flare put onto the case mouth during the case expanding stage of the reloading process. The case mouth needs to be expanded sufficiently to give the bullet a good start into the case and testing has established that when the bullet can sit deep into the case, in all the way up to the first lube groove on the bullet, damage to the powder coating will be avoided. This will of course shorten the life expectancy of your cases, due to the additional stress this increased flaring will put on the brass, but it is necessary to avoid damaging the bullet coating.

If you find that you are unable to expand the case mouths sufficiently to accommodate the bullets, without damaging the coating, a coating of Lee Liquid Alox does seem to ease the whole process. After the bullets have been tumbled in a suitable container with a few drops of this lubricant and then allowed to dry they do slip into the cases that much easier.

How do they shoot?

The powder coated bullets can be reloaded and shot over your existing powder charge, with no need to make any changes, and they shoot very much the same as their plain lead equivalent. The point of impact will be slightly different, but no more that you get with any switch of bullet type. The coating is pretty tough and there was no evidence of damage being caused during loading into the magazine or chambering.

While it may be impossible to measure the benefits of these bullets in terms of lead omissions, it is a reasonable assertion that the coating will be decreasing the amount of lead being released into the air during shooting. The EU still pushing for a total ban on the use of lead shot (another good reason to leave) and just a few years ago the government were wise enough to disregard attempts to get lead shot and lead bullets banned in our countryside. It seems inevitable that lead bullets will continue to come under further scrutiny and so powder coated bullets are well worth a look at, even if just for your own health benefits. As the saying goes: ‘The futures bright, the futures orange (or blue, or red…).