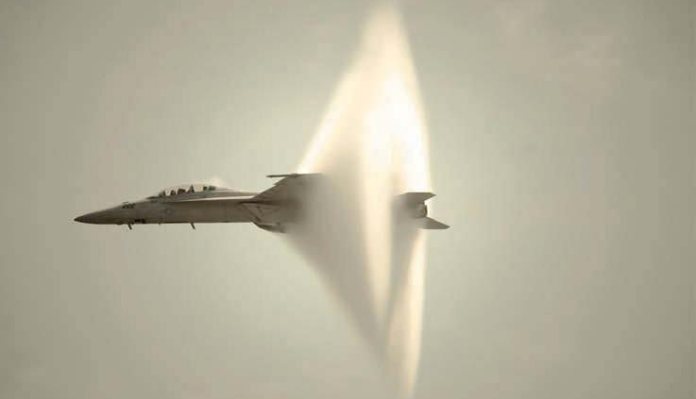 It must have been evident to earliest primitive man, but certainly not understood. Aristotle was one of the earliest observers to attempt a written explanation of the phenomenon. He rightly concluded that if someone or something creates a sound, it would not be possible for it to be heard in all places immediately, by example, the sound of a lightning flash arriving with the observer well after the visible light. He articulated the idea that sound had a measurable speed. However, it would be around 2000 years after his writings before serious attempts were made to actually measure it and consider what may happen to anything travelling beyond it.

Sonic boom, from the gases

Nonetheless, documents indicate that they appreciated the fact that cannonball behaviour changed above a certain level of performance. Not that a sonic boom only occurred when the projectile exceeded the speed of sound. The windage (gap between the bore and the projectile) of these early smooth-bored weapons could be such that the deflagration gases would begin to exit the muzzle well ahead of the ball… at above the speed of sound.

It would be the late 1940’s before man would officially experience transition through the ‘sound barrier’. Despite claims to the contrary U.S. test pilot Chuck Yeager is credited with being the first to survive the experience in level flight. Actually, a Luftwaffe pilot was probably the first in 1945, strapped into the front of a VTO Bachem Ba 349 Natter. Having failed to parachute to safety he was vaporised after the ballistic rocket plane plummeted to earth at full power.

Within the atmospheric layer of Earth there are three defined levels of speed in relation to that of sound, subsonic, transonic (the median being sonic or Mach 1) and supersonic. For projectiles having a muzzle velocity below approx 1060 fps (speed of sound at -10ºC) there are no issues with shock waves relating to speed and stability – the wave trails the base of the bullet for the duration of flight. However, firing projectiles that chrono well below the speed of sound may still result in a sonic boom, as I discovered. In a moment of idle curiosity about twenty-odd years ago I decided to experiment with subsonic ammo in a stainless Rossi .44 Mag L/A. My interest was really to establish the lowest recoiling load that still gave acceptable indoor range accuracy.

My brisk factory Norma 240-grain JSP chrono’d a shade over 1700 fps and barked like a dog. My stock reload with a Hornady 240-grain JHP and Hodgdon H4227 (around 25-grains) gave similar results but with less violence. For comparison, the same load in my Ruger Super Blackhawk delivered around 1330 fps and a healthy muzzle flash. I loaded down in large increments until the chrono read close to 1100 fps from 15.6-grains.

Continuing downwards I was truly surprised by the fact that a charge of 14-grains gave a subsonic velocity of just over 1000 fps but still made a serious bang. It took a lot of pre-Wiki reading to discover that whilst the pill was subsonic, the cone of expanding gas from the muzzle was NOT! Hence the sharp report. From memory (nope, there is no entry in my reload database!) I got down to about 940 fps before the boom disappeared. A while later I repeated the trials with Unique as the propellant. Being somewhat faster than the H4227 it had an all-burnt point much further from the muzzle, confirmed by the fact that the round lost its bark above 1000 fps, but still well below the sonic threshold. My results, whilst valid, are somewhat skewed from the mathematical predictions from equations in the excellent book ‘Ballistics: Theory and Design of Guns and Ammunition, Second Edition, by Donald E. Carlucci and Sidney S. Jacobson. The simple lesson was that ‘subsonic’ ammo is not necessarily about the velocity of the pill!

To be avoided at all costs

Projectiles that transition from supersonic to subsonic during their flight can be subjected to a traumatic experience, the extent being largely dependent upon the rotational stability and profile of the bullet. Exiting the muzzle at more than 1400 fps (approx Mach 1.25) the compression shock wave is at the tip of the bullet. However, by the time it slows to about 1350 fps (Mach 1.2) things are starting to go wrong as the shock wave begins to detach from the tip or meplat.

As the centre of pressure moves forward (a function of the movement of the shock wave) the rate of spin and bullet profile come into sharp focus as the controlling elements of stability. The upset is more or less complete by 1150 fps (Mach 1.025) as the shock wave arrives at the base of the bullet. (These values are based upon the ‘default’ speed of sound in air (Mach 1 or 1,126 fps) at STP, being dry air at 20°C.) The higher the rate of spin and the nearer the axis of rotation is to trajectory the better the bullet will survive the transition. Unsurprisingly, short, boat tail bullets fare best. Furthermore, early transition is better than later as the greater the angle between axis of rotation and trajectory, the more likely the bullet will suffer yaw and pitch effects or worse, begin to tumble. The effect of this transition is also to change the practical BC (Ballistic Coefficient). The simple rule is to avoid transition at all costs.

Speed is your friend

As a rule of thumb, fast is best. Both linear speed (fps) and rate of rotation (rpm). Supersonic flight gives reduced times of flight, the best bullet stability, better mathematical predictability and potentially better accuracy. As a conclusion to this piece I’ll give you a few interesting ‘sound’ stats. To double the speed of sound in dry air at 0°C the temperature would need to exceed 800°C. Sound travels faster in liquids and even faster in solids. In water 4,870 fps is a typical figure whilst in solids the values range from 16,500 fps to a limit of about 39,500 fps in diamond.