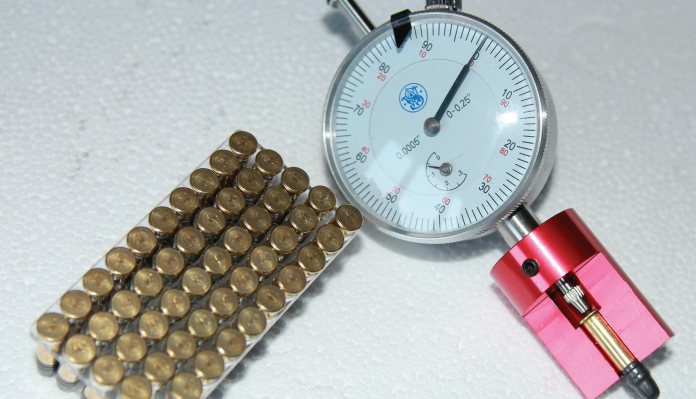 As a reloader I’m all about consistency of performance of the ammunition I produce. It’s logical really as if each round is as near identical as it can be to the others then your gun should shoot them more uniformly. A lot can be done with centrefire ammo, but what about rimfire?

We all accept that rimfire ammo is made in billions and also suffers from occasional hiccups. This usually manifests itself as what I call poppers and crackers – the load is either too slow or too fast with a subsequent and dramatic change in point of impact. There’s little you can do about it on paper or live targets!

The target boys who buy top end match fodder will test shoot various batches to find the one that’s right for their rifle, as despite what you might think some production runs of the same load will vary and it’s these minor changes that make a difference.

It’s not just about finding the perfect round but also the ones that are as identical as possible. We have no control over any aspect of rimfire ammo production. However, we can measure the only tangible variable - the case rim thickness. This can and does make a surprising difference to performance, as it can change how far the bullet sits from the rifling and even how much case is in the chamber. Infinitesimal variations but significant ones!

With that in mind Pelletperfect run by Tim Booth brings in the RavenEye rim thickness gauge for any rimfire calibre with a 22 LR head. Made of CNC-machined aluminium alloy it’s a simple device best used with a dial indicator gauge, though a vernier caliper can be used too. Tim supplied a Smith & Wesson gauge offering 0.0005 x ¼” notation, this means it can measure down to five ten thousands of an inch, which is ideal.

What you have is in essence a 22 chamber cut in half with the plunger end of the gauge sitting over the base. Once set and zeroed lift the plunger drop in a round of ammo and slowly lower it so the tip rests on the base. This measurement is noted and subsequent rounds are measured and then segregated into similar groups. Which will all perform slightly differently to each other and it’s down to you to see what is best in your rifle. I tested a cross section of ammo and found a number of variables even from a single box. You do of course have to decide how much leeway you give the ammo as to batching it as you could get overly critical and end up with far too many small batches. However, in use consistency of velocity and performance did improve from batch to batch. A 17HMR/22 WMR gauge is also available and Tim might be bringing some in too; I’d buy that for a dollar!