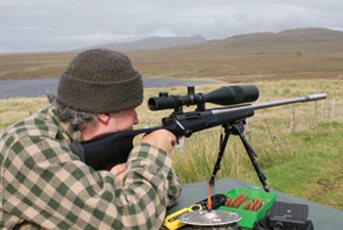 If proof was needed, fast moving small calibres are capable of superior downrange performance, primarily due to the enhanced Ballistic Coefficients (BC) of the bullets as compared to a similar weight in .224 or .243. That’s some statement but small calibres have enjoyed a renaissance of late and I for one am a big fan. I love my .14, .17, .20 and .22 calibre wildcats but my best to date has to be the .20 Satan developed nearly a decade ago…

The only compromise with small calibres is that as the bullets get heavier they become longer and therefore need a faster twist rate to stabilise. However, if you want to push a 50-55 grainer down a fast twist barrel quickly, pressures can rise alarmingly.  A 50-grain Varmint Boat Tail needs 1 in 9 to stabilise it rather than the 1 in 12 common to the lighter .20 projectiles. The 55s prefer 1 in 8 or 1 in 8.5 though I have played with 1 in 6 twist’s and custom made 60-70 grain bullets.

I chose a Pac-Nor Super Match grade 29” tube and, as I wanted to be able to use heavier bullets, I had them make me a tight 1 in 8.5 twist to ensure the 50 and 55 grainers would stabilise. The barrel was mated to my RPA Quadlite switch barrel action.

It would be nice to push the 50 and 55-grain Bergers as high a velocity as possible, so needed a case that fulfilled these criteria. At first the .22-250 Rem was an obvious contender due to its easy availability but I hankered after something different. I really wanted a ¾ length .243 case but did not want the chore of resizing and forming brass, so I hit on the idea of using the 6x47 Swiss Match (SM) case in May 2003.

This is a match-quality .308 bolt face cartridge with a 47mm body and therefore represents a ¾ length .243/.308 case capacity. This was actually the Mark 1 version because as soon as the Lapua 6.5x47mm case came out I necked this down to .20 and this was the .20 Satan Mark 2 version. In reality both cases perform similarly despite the 6.5x47L having a small rifle primer unlike the SM case which has a large rifle primer.

The design and water capacity of 44-grains looked feasible and a reamer was ordered from Pacific Tool and Gauge that would entail minimal brass preparation and require no neck turning. I settled on a neck diameter on the reamer of 0.235” that would give 1.5 thou clearance on the neck and chamber wall, along with a length of 1.8215” and a 30° shoulder. I did actually design an improved case with a 40 and 45° shoulder and a small capacity case called a Pup if the load density was not optimum.

Case forming was easy. Virgin 6x47 SM brass was sorted by weight for consistency and batched accordingly. They were then run through a .22 BR FL die set with sizing button removed to initiate the first neck sizing procedure, being sure to lube with Imperial Sizing wax as I went. Next it was run through a .20 BR FL die with button removed to achieve the primary .20 neck diameter. I then trimmed the cases to 1.8215” to uncut the chamber/reamer spec and ran each one through a .204 expander mandrel to even out neck concentricity and give enough tension for the bullets for fire forming. De-burr the inside and out, and hey presto one .20 Satan cartridge ready for fire forming.

Medium burn rate powders such as Alliant Reloder 15, RL17, Varget or H 4350 would be good choices. I reckoned that 38-grains behind a 50-grain Berger would be about top dollar. So I reduced the load and started at 32-grains of RL 15 as a fire-forming load with a Federal 210 primer.

I pushed on to 37.5 to achieve 4136 fps but groups opened up to 0.5”, 38-grains made a whopping 4175 fps. What struck me was not the high velocity from that 50-grain Berger but the consistency with less than 15fps variation. I had my load with 37-grains of RL 15, a 50-grain Berger bullet ignited with a Federal 210 primer would shoot 0.25” 3-shot groups with less than 15 fps variation and a staggering 4018 fps average velocity, pretty good. Other powders like Vit N140, Varget and H4350 had similar results with the 50 grain Berger’s

One down side is case prep and run at full throttle the .20 Satan barrel life for top accuracy is only 1000 rounds but that’s 1000 dead crows!