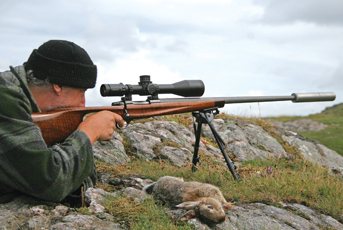 Bruce Potts might have just created the ultimate barrel-burner with his latest whacky, wildcat creation, how does 5000 fps+ sound?

I had just touched off the Sako`s trigger and what read on the chrono screen had me howling for joy, 5144 fps! Warp Factor 5 indeed Mr Sulu. The cause of all the adulation was another Wildcat project to push the boundaries of ballistics just that little bit further.

I had been working on a super fast .22 centrefire dubbed the .220 Blitzkrieg for ultra long range crow shooting but after a call to Callum Ferguson he suggested the ballistics were similar to an existing wildcat to which he had the reamer.

The cartridge was the necked-down 6.5-284 case to .224 cal sometimes called the .223 Valykrie. It’s a screamer but I had past it up due to the usual “that will burn your barrel out mate”, “waste of time” comments from “experts”. Me being me, ignored the advice and asked Callum to re-barrel an old Sako A2-actioned rifle.  The .22-284 actually is an easy wildcat to form, load and doubles as a supreme long range varminter and deer legal Scottish roe rifle and small species deer legal in England and Wales too, perfect.

Being a .224 centrefire you have a choice of bullet weights from 30 to 90 grains but choosing a rifling twist rate to suit all at the speeds I was attempting would prove problematic. Ideally I wanted a fast twist barrel for the 75 grain A-MAX’s for long range vermin and then switch to 55 -75 grain soft or hollow point bullets for deer. Trouble is a 1 in 6 or 1 in 9 twist barrel and those lighter 30-40 grain pills would mean a very high rotational twist and torque and would they spin the bullet apart as it left the barrel?

What the hell, a 1 in 7.7” twist Krieger, Match-grade stainless steel tube it was and a 5.5 profile so good and heavy. Callum fitted this to my existing Sako A2 action bedded into an original Harry Lawson walnut Cochise Stock that was the forerunner to McMillan’s Lazzeroni design. He also precisely chamber the barrel for the .22-284 with a tight neck, 0.252” and separately throated it for a 75 grain A-MAX. The cartridge overall length (COL)  was 2.9245” which meant it would not cycle through the mag as 2.80 max but that was no problem, the lighter deer bullets would.

Forming brass is no real chore but does involve neck size reduction as well as turning to fit the tight dimensions. I started with virgin Lapua 6.5x284 brass but I guess you could use 284 Winchester instead but that means 7mm down to 0.224” instead of 6.5mm to 0.224”. H20 capacity on this case is large at 61.84 grains.

As usual there are several ways to skin a cat. You can use smaller neck bushes in a Redding Type S bush neck die to reduce the diameter. Or, as I did, use the Redding .22-284 full length die supplied by Callum. But you cannot use this in one action otherwise the neck crumbles as you are moving too much brass at once. So I trimmed the neck first with a SinclairNT-1000 from 0.291” O/D to 0.284 then applied Imperial sizing wax and then sized the neck a third at a time until it was uniformerly reduced in diameter. Great, but the neck walls were too thick and you have the dreaded doughnut at the neck/shoulder join, so turning is your only answer.

I used a K&M neck expander to get the inside diameter to 0.224” so I could slip the case onto a K&M neck turner tool and reduce the neck to twelve thou (0.012) either side. In this way when a bullet was seated the overall O/D was 0.248” that would give 4 thou clearance (two either side) in the tight neck chamber of 0.252”, simples!  Two thou is a bit slack but this is a high intensity round and I wanted the bullet to go up the barrel not stay put! That Krieger barrel was smooth as butter and very little fouling from the 47 grains of RL19 powder behind a 75 grain A-MAX. Because the .22-284 is a screamer I ran a few loads through Quickload ballistics program to see if the bullets and powders I had in mind would work. I kept powder choice and bullets to a minimum so as not to stress the barrel too much.  As it happened this Callum rifle like all his others was ultra accurate, so it made the task easy. I fired 3-shot groups using Federal Gold Match primers with powder metered by a Harrell culver design for precise weights and groups measured c to c.

Although the fastest velocity were the 30 grain Berger’s, I just had to try them, moderator off just in case. God they were loud as one would expect, accuracy was OK but the fastest at 5143 fps average of three, was 0.55”. When people were telling me they would come apart, no comment.

I fitted the excellent Kahles Tactical illuminated scope for testing and it was a prefect match for the 22-284, with ultra precise all the way out there, a MAE 38mm can muted the muzzle blast extremely well. I had several rabbits at extreme range 500 yards+ just dialling in the holdover of 30.7” drop or +5.88 MOA.

I switched back to the Sciroccos 75 grainer’s for some roe stalking, again 51 grains of RL19 was the sweet spot and had a very nice six point buck out at 171 yards and he literally was pole axed by the   22-284, speed does kill, the thorax contents was jelly.

Never listen to people who have not shot or owned a particular calibre; there are so many ‘internet’ experts these days rehashing old material it makes me proud to be an old fogie; 187 shots so far. It’s not a shoot it all day sort of rifle and let it cool otherwise throat erosion and cracking will occur and the moddy gets very hot after 6 rounds.

True the .22-284 will have a low barrel life but I am prepared to live with that, after the initial reloading I have chosen my loads for long range and deer and so honestly how many CWD am I going to shoot a year with it? So why deny myself the unbelievable performance. Yes 5144 fps is outstanding and got me to thinking of another project so 6000 fps is the next goal…  and I know just what I need.