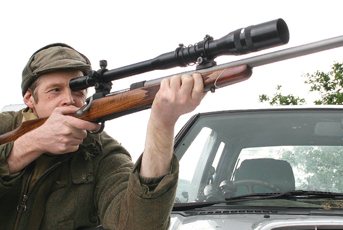 I was after a retro-style varmint rifle chambered in a classic cartridge so a .220 Swift rifle seemed ideal. The origins of the Swift go back to the mid 1930`s when Captain Grosvenor Wotkyns had developed a wildcat around a necked down .250 Savage case. This was essentially a modern day .22-250 but Wotkyns tried to impress Winchester to take it on. It transpired that Winchester’s goal to push a .22 pill at over 4000 fps with safe pressures was not that reliable and so Grosvenor’s creation would be side-lined to be called the .220 Wotkyns Original Swift whilst Winchester carried on development of their own.

This took the form of wildcatting their own 6mm Lee Navy case that was far stronger than the .250 Savage and designed to work at higher 58,000 CUP pressure loads and still achieve the magical 4000 fps velocity. Winchester finally launched their .220 Swift in 1935, but instead of great acclaim in the shooting press it received bad reviews. Winchester had made one big cock up, the original rifle chambered in the 220 Swift was the model 54, but the barrels were meant for .22 Hornets with 1 in 16 twists rates and softer steel properties than a normal nickel steel derivative. Of course, the barrels over heated, pressure went sky high with tight bores and barrels wore out quicker than you could reload the next batch of ammo. Soon everyone was denouncing the .220 Swift in favour of the .22-250.

Modern day tech and metals have cured any ills the Swift had or did not have. At first glance the .220 Swift looks more like a deer cartridge than a varmint round with its long 2.205” case and slow tapered body. But this large rifle primed 0.473” rimmed case when topped with a Ballistic Tip or V-Max bullet just looks right.  Original Swift loads were meant to send a 48-grain bullet down a 24” barrel at 4110 fps, but with a selection of benchrest quality light and heavier .224 calibre projectiles at hand the reloader can exploit speeds right up to 4600fps with lightweight, 30-grain pills from long barrels.

If you are building a Swift from scratch there are two distinct routes you can take. One, the traditional 1 in 14 twist barrel option to stabilise and launch light bullets from 30 to 55-grains at stupid speeds. Two, you may elect to opt for the more efficient and long range contender in the form of a 1 in 9 twist to stabilise 70 to 80-grain VLD bullets to exploit some serious down range performance and eke every last drop of range out of this venerable performer!

Today more people are opting for the fast twist route as they rediscover the quite phenomenal long-range capacity of the Swift. Usually it is the form of a wildcat of this round in the form of the improved case under the names of Weatherby Rocket (32° shoulder improvement) or .220 Swift Improved with a 40° shoulder to gain more powder capacity and thus range.

Me, I wanted the pure, classic Swift prodigy, so went for a 1 in 14” Pac Nor 28” barrel Tikka special. Venom Arms made this for me many moons ago but I have rediscovered it with the new bullets and powders available today.

In fact the whole Tikka M65 action, originally from a .270 estate rifle sourced from R Macleods gunsmiths in Scotland, underwent a complete strip down and glass peened blued treatment, again very smart and hard wearing. The stock too and original sporter Tikka version was bought back to life after an extensive de-denting from years of abuse. The package was finished with a vintage (by today’s standards) Tasco, pre-1970, long, barrel-mounted scope. This beauty offered a fixed, x16 magnification and characteristic recoil spring and external windage and elevation adjustments dials, so characteristic of the era of classic varmint rifles, perfect.

Smallest bullet weight that is practical to be driven hard in the Swift is the Berger 30-grain, this little grenade will launch at 4600fps plus and still deliver good accuracy although at the expense of barrel life! 40-grains is where the cautious reloader should start their experimenting. There’s a good choice with Combined Technologies, Barnes, Berger and Hornady’s V-Maxes rated as some of the best. That extra weight over the 30-grainers allow better down range ballistic, thanks largely to the superior ballistic coefficients whilst still sizzling along at 4300fps. If it is not a windy day (sub-10 mph) those 40s are just dynamite up to and including 500yds, delivering explosive results for perfect on target energy delivery.

When using 40’s I usually use Reloder 15 although a little slow 43.5-grains gives 4321 fps from that 28” barrel and very good accuracy with reasonable pressures. Again Varget with a similar load generates 4322 fps with a 41-grains, whilst Vit N150 again slightly slower both break the magical 4400 fps barrier with 43.75-grain, but 43-grains at 4318 fps is really maximum in this gun.

Accuracy on an average 5-shot string measured 0.425” with the Vit N150 load which is excellent for me and disproves the inaccuracy stories about the Swift - in my eyes at least!

Next are the 50-grain bullets although you can shoot 45-grain Barnes, the 50s however are really where the Swift comes alive. With a 1 in 14-twist barrel you can push them hard and their increased BC of approx. 0.220 and improved energy values make this range of bullet weights a varmint’s worst nightmare. A Hornady 50 grain V-Max in front of either 40-grains of either RL15 or Varget and 41-grains of Vit N150 can safely produce over the 4000 fps velocity ceiling. Best load was the Hornady V –Max at 4139 fps/1902 ft/lbs , that’s going some!  Similarly 52 or 53-grain bullets offer the shooter some nice high BC values for a .224” rifle, 41.5-grains of H380 sends a Speer 52-grain HP bullet downrange at 3951 fps.

55-grain bullets again are really good in the Swift with Nosler’s Ballistic Tip or Sierra BlitzKing being excellent. Here Reloder RL17 seems to be the best blend between burn efficiency and velocity. 41.5-grains of RL17 and a Ballistic Tip gives 4020 fps/1973 ft/lbs. Sierra 55-grain Game Kings would be excellent with the same load as a Scottish Roe or English small species round.

Factory ammunition in the Swift is not plentiful but Federal 40-grain Ballistic Tips shot 4211 fps and grouped three shots into under an inch at 100 yards. Norma’s 50-grain Soft Point was also a great vermin or legal deer load, this one and shot 0.75” at 4044 fps/1816 ft/lbs. Hornady’s 60-grain Hollow Points were a little heavy for best reloads but yielded 3692 fps.(See table overleaf)

There is no doubt that the Swift was a controversial calibre in its day and also now! However, its doubters should be silent because today with modern barrels, powders and excellent bullet choice it remains a valid cartridge. In fact it doubles the ground between small calibre varmint and small species deer work very well if the proper bullets are chosen. Recoil is mild and it’s easy to reload, and when coupled to a classically designed varmint rifle like the Venom Tikka M65 you have a greatmodern day classic that can surgically dispatch vermin or crows at some quite astonishing ranges.

I agree the new .20 calibres have better ballistics, but there is still a place for the .220 Swift and judging by the interest in retro firearms and calibres it won`t be too long before the old Swift is rediscovered by a whole new breed of British shooters and I for one will be very pleased about that.