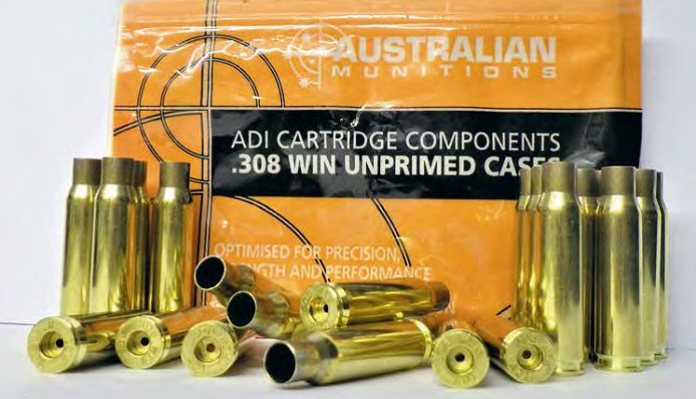 Australian Munitions produces everything from small arms ammunition to missiles and missile systems, and all of its products are made to the very highest military specifications. Their small arms ammunition, marketed under the ADI brand name, is all produced inhouse and their components are also used in some of the best-known brands of commercial ammunition in both America and Europe.

The .308 Winchester cases on test are described as ‘match-grade military specification’, so expectations should be very high when you open the packet. You will not be disappointed because, on inspection, each and every case in the pack was in perfect condition and very well finished, with no uneven edges, burrs or uneven head-stamps.

When one of these cases hits a solid floor you hear a reassuring ‘ring’, rather than the dull tinny sound you get from some cheaper brands of cases, and although this is not the most scientific of tests, it’s a great start (the case also survived the fall undamaged, which is also reassuring). I weighed a sample of cases and the variation was just 1%. The lengths were also very consistent, with a maximum spread of just 0.005”. This is the sort of consistency that you only get with the more expensive brands.

The cases all chambered very smoothly, so they were not resized before being used for the first time. Finished rounds also chambered without any issues. The case length was also ready to go at 2.008”, so no trimming was required.

The primer pockets were very clean and well-formed, making priming quick and easy, and they required no reaming out or regularising. The flash holes were also clean, with no burrs or bits of brass to remove.

Once fired, the cases ejected smoothly and could all be re-chambered easily, indicating that they have been fire-formed nicely and have sprung back down sufficiently to still cycle in the gun. Neckonly resizing was all that was required to get the cases up and running again.

After a couple of cycles of reloading and firing, the cases continued to chamber and eject perfectly, and the neck tension showed no signs of lessening. After three uses the cases did not require any trimming, as the lengths remained consistent.

These ADI cases are definitely high quality and during testing, their performance was on par with other high-quality brands. The brass has been very well prepared and treated, so it has the correct amount of springiness and strength for repeated uses, and they have obviously spent time finishing them properly. They are available in a number of popular calibres and although not cheap, the prices are reasonable. Plus, with the cases likely to last several reloadings, they represent very good value for money. ADI factory ammunition uses the same cases, making it a good source of brass if you want to try their factory products first.