Check this out - Reloading 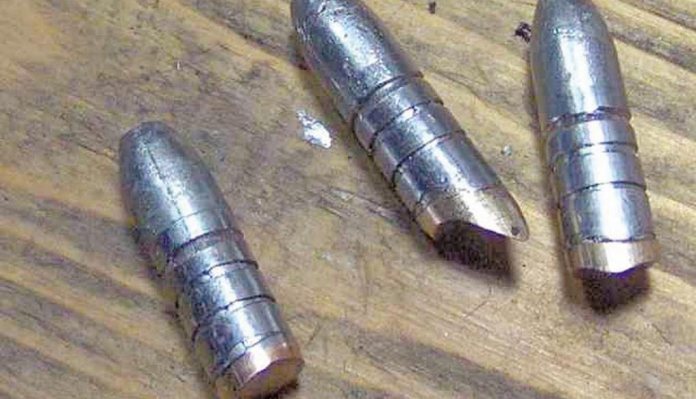 This month’s topic is one that really only applies to the lead projectile users amongst us. However, I hope that it will be an interesting read for the rest of you. Extending the performance of cast lead bullets is the subject. Gas checks (GCs) are the means by which we achieve it.

The earliest small arms ‘bullets’ (a word derived from the French for ball, Boulle – or small ball, Boullet) were mostly made from stone or cast iron. But as calibre sizes reduced, cast or swaged lead became the most practical material. An example of these early ‘small arms’ was the 4” bore Bastard Culverin, best described as the original hand canon and a precursor of the musket.

The later use of shaped projectiles and the development of rifling saw quantum improvements in both range and accuracy. However, progressively increasing the black powder charge in the quest for further performance gains often saw catastrophic gun failures. These blow-ups were attributed to the poor quality of gun steels, or the variable performance of the primitive propellant then employed. Indeed, the need to test both powder and barrels for quality and uniformity was the trigger for the founding of the Gun Barrel Proof Houses.

From the tests, it soon became clear that bullet deformation was contributing to the blow-ups. These projectiles being made from more or less pure lead were therefore rather soft. Acceleration pressure on the base when engaged in the bore results in increased wall pressure as the base tries to catch the nose. Increase the base pressure and the lateral grip in the barrel increases; so, further increasing the pressure, as well as causing the material to strip. Making the base of the bullets stiffer and more resistant to stripping and melting was found to extend their pressure tolerance. Adding a jacket or making the entire bullet from stiffer materials further enhanced performance.

A first step in improving the resilience of your home cast bullets is to increase the hardness of the alloy by the addition of tiny levels of tin and antimony. However, always be mindful of the fact that different alloy mixes will throw different diameters, for example; Linotype will come up larger and wheel weights smaller! Thereafter, the addition of a gas check; essentially a gilding metal cup over the base was the best solution. Whilst Dr. Franklin W Mann experimented with reinforced bullet bases at the turn of the last century, it was US1906297099A·1906-01-22 patent, in the name of John H Barlow that set the pattern for the GC that we know today.

Not that the idea was widely embraced at the time. An early exception was the 1882 .32-20 Winchester (aka .32 WCF). Yes, the 20 represents the charge in black powder. Used in both revolvers and rifles, it offered more rifle performance with the new-fangled smokeless propellants than stock lead bullets were capable of safely delivering. Enter the Ideal/Lyman 111-grain 311316 rebated mould, designed for use with GCs. (Collector note:- Ideal/Lyman dropped this mould some years ago but it’s now available from a relatively new maker in the USA called NOE from E. Provo, Utah). With lead bullet velocities potentially increased to as much as 2000 fps (not in the .32-20!), coupled with reduced fouling, the potential benefits of GCs finally began to gain wider appreciation.

Within a few years, the majority of calibres were supported by a commercial line of GCs. Most, but not all were, and are, stamped from gilding metal – a brass alloy comprised of 95% copper and 5% zinc. Whilst a few are still made as plain cups, many, such as the comprehensive Hornady range of 16 calibres, are made with a tapered wall that firmly locks into the rebated wall of the bullet. Care must be taken with the use of non-locking (press-on) cups, as they can easily strip from the rebate during assembly if their rim is inserted below the case neck – or can separate during firing.

Not that all cartridges and all bullets can benefit from the use of a GC. Cartridges containing heel base bullets are generally not suitable candidates, nor are those designs that have a taper or full calibre base. Suitable bullet designs are formed with a rebated base that is easy to recognise. Lee helpfully mark their GC capable bullet moulds within their range with the addition of the letter ‘C’ (for Cup) to the part number. Lyman show a pop-up drawing of a cup against each suitable online selection – try their 257420 as an example.

Saeco (now part of Redding) are the other major mould producer and helpfully leave the choice of mould suitability to the customer!

Fitting a GC to your cast bullet is usually part of the single cycle of your lube/sizer press. However, assembling some combinations of cup and raw casting can leave it skewed on the base of the bullet. It is therefore advisable to make the seating of the cup a first stage operation prior to lube sizing. Lyman now include a spacer collar with their Mod 4500 press and offer them as an extra for earlier L/S models. It supports the cup squarely against the bullet base during fitting. Having installed them on your batch of bullets, the collar is removed, and the lube/size cycle is then carried out.

If you find the cost of commercial GCs prohibitive, or you like to take control of as much of the reloading process as possible, then you can make your own cups! At the most basic level, you can recycle aluminium drinks cans! However, a better choice would be to start with 0.3mm (0.012 Inch) copper, gilding metal or aluminium sheet. A hollow body punch is required to stamp out the basic disks, their diameter allowing for both the rebated bullet diameter and the side wall height. A simple tool steel body and punch, together with a suitable bench press, are now required to form the shape of the cup. Mindful of the fact that it will have a parallel wall and that you will need a full set of tools for each calibre. Yup, there are people who really go to all that trouble – check out YouTube!