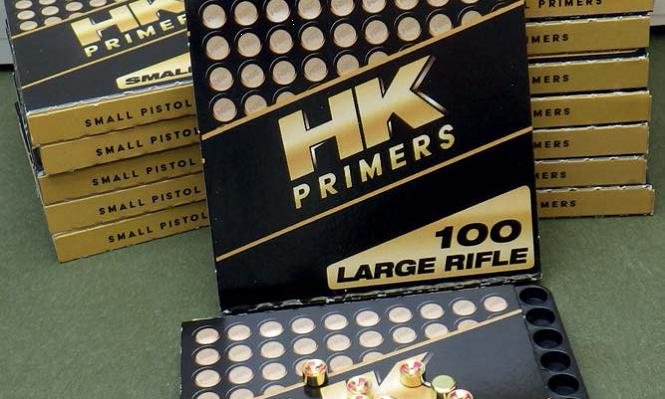 It is not every day that a new make of primers hits the shelves, so when Henry Krank introduced their own brand to the UK market they were definitely worth taking a look at. Available in the common sizes, small and large rifle and pistol, and being boxer-type and noncorrosive these primers can be used in most of our common calibres. The country of origin and appearance suggest a possible link with the PPU brand, and with their ammunition being great quality this is reassuring as to the quality of the primers.

First on test were the small pistol primers and they were used in ammunition made for a Marlin underlever and a Taurus long barrelled revolver. The primers seated easily, and the amount of pressure required to seat them did not feel any different to that required for other brands. Once seated, the primers retained a nice curve on the perimeter with no sign of flattening out. In both guns the primers functioned flawlessly, no light strikes or signs of problems on the fired primers. There was no noticeable change in the point of impact or the grouping on the target and no signs of unburned powder.

The large rifle primers were tested in a 45-70-calibre Chiappa underlever and a .308 calibre bolt action rifle. Initially the large primers were a bit hard to seat, and priming on the press, rather than using a hand priming tool, proved to be the best way to work with them. The process was also eased by running the cases through a primer pocket uniforming tool. In common with all types of primers, making sure the primer pockets are correctly sized and clean will go a long way to ensuring the primers are seated correctly. Cleaning out and sizing the primer pockets resolved the issue by correctly cutting the inside surfaces to the proper dimensions.

Firing the large primers also confirmed that they are a bit harder than other brands, and some light strikes did initially occur. Fortunately, the hammer spring on the Chiappa is adjustable and just a ¼ turn on the tensioning screw resolved the problem. In the .308 all of the primers worked fine. With only minimal adjustments to the hammer spring on the Chiappa the primers worked well and again there was no noticeable change to point of impact or grouping for the shots fired.

These are very well-made and consistent primers. They are slightly harder than some other brands, but this did not prove to be a big or insurmountable issue. They are very well priced and, if they are held at the current price level, they represent a great value alternative to the more well-known makes.