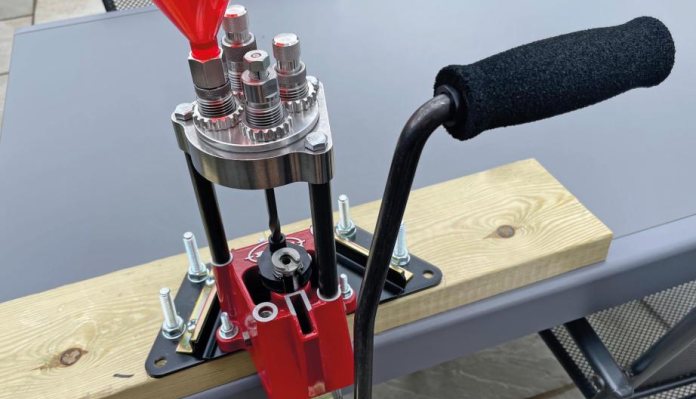 Reloading presses come in three distinct options, that suit all needs; high output semi and full progressive machine (400-rounds an hour +), to the single station design, which might produce 50! Here the speed of production is not an issue, but consistency and precision are. Slower but more precise might be a better description! Sitting in the middle of this mini arms race is the turret press, an often overlooked option, that appears to combine aspects of the aforementioned designs and in doing so is neither fish nor fowl, but something in-between that might appeal.

The name says it all

Looking a bit like a progressive, which has fixed dies and a rotary, multi-station shell plate, attached to the ram, the major difference is that all the dies sit in a circular holder (the turret). This can either be rotated by hand (indexed) or with some designs automatically, as the press is operated. Also, it uses a standard shell holder as those on single station designs. And with the ability to select manual or automatic operation (some models), means you can easily produce one complete round at a time; start to finish, or batch the usual operations; size/de-cap, prime and bullet seat etc.

Most of the larger reloading companies offer turrets but I decided to go with Lee Precision, as it’s a brand I use most of the time and trust. On test is their Lee Value 4-Hole Turret Press with Auto Index kit. They also offer a larger model called the Classic 4-Hole, which differs in having a cast iron base and the ability to handle longer cartridges/ calibres. Both accept the standard 14x7/8 TPI dies and shell holders.

The ‘Value’ shows a cast, aluminium frame in Lee’s red livery. The top plate (planten) attaches to this by three steel posts to give a stronger, O-frame like configuration. The actual turret is aluminium and shows four die stations, this just drops in and a quick turn locks it in place while still allowing rotation. In the centre of the base is a square shaft with a spiral section, which as the ram falls provides the power to turn (Auto Index) the turret to the next station for each operation of the handle. This component is removable depending on the sort of reloading you wish to do.

The base plate and ram section etc. is all single-stage, with a compound leverage system aided by a large and reversible, L-shaped operating handle with a comfortable, foam-rubber roller grip. Priming is handled by two, ram-mounted, drop-in, L-shaped arms for large and small primers. The kit includes Lee’s Auto Drum Powder Measure and Safety Scale, Primer Pocket Cleaner, Cutter and Lock Stud to trim the cases, and a Chamfer Tool to deburr after trimming.

Optional is an automatic priming system, and if you want to use the Auto Drum powder measure, you’ll need a riser tube that goes into the powder-through die that’s operated by the rising case. If not, you won’t be able to adjust it, as the other dies block it. However, you can also fit a funnel to the expander die, via an adaptor and pour a pre-weighed charge into the case, or even use their powder scoops, as they work well too.

Spare turrets are available and inexpensive at £13 a time, so if you’re a multi-calibre loader, it’s a simple matter to grab a spare or two, pre-set the required dies and drop the new one into position ready to go. If you opt for Lee, they come with a shell holder as standard, so that’s one less thing to buy!

I borrowed the machine from Lee importers, Henry Krank & Co Ltd for making 9mm Parabellum ammo for a gun test on the SGC Lever Action rifle, they also supplied a Deluxe set of 9mm, Carbide pistol dies too. The sizing die has a carbide insert, so you don’t have to pre-lube the cases, which is an advantage on a machine that can offer a 200-rounds per hour production rate, over a single station design.

Although it’s not solely for pistol calibres, according to Lee Precision, it can only reload a maximum cartridge overall length (COL) of 2.3125”, so will handle the likes of .222/223 Remington or .30 Carbine etc. However, for longer rounds, you can disengage the auto index and manually rotate, plus you’ll need a rifle, powderthrough charging die. If your needs are calibres like .308 Win, .30-06 etc, then I’d recommend getting Lee’s Classic 4-Hole Turret instead, which offers all the same functions but has a higher COL tolerance.

At a mere £172.30, complete with turret, two priming arms and the auto drum powder measure, safety scale, primer pocket cleaner, cutter and lock stud, the Value Turret Kit, as always with Lee products, represents great value for money! The question is, how will you use it? I’m a fiend for pre-prepping my cases, so they are sized, trimmed, cleaned and primed well before reloading, so in some ways negating the advantages of a production system like this.

However, the calibres with carbide dies (mainly pistol) require no lubrication, so the 9mm will allow you to simply ensure the brass is debris-free and go straight into the de-cap/re-sizer. I’d probably tumble them first! If using standard steel dies, you will need to lubricate the fired cases before sizing, however, I’d recommend wiping it off afterwards to avoid the possibility of contaminating the powder or even primer.

Setting up the dies for function is as before. Drop the turret into the planten and rotate it, so it engages, fit the shell holder, and raise the ram to its fullest extent. One at a time, screw in the dies and adjust them for length etc. in the normal manner as to their function. When happy, tighten the lock rings.

The Auto Drum powder measure screws into the top of the powder-through die and is actuated by the rising case. This is a volumetric system that uses plastic discs with multiple chambers, each one giving a different charge weight. Discs are rotated to alter the charge; Lee offers an optional double-disc kit (complete with extended screws) that allows you to stack one on top of the other to increase loads for higher capacity rifle cases.

For the 9mm, I went for the simpler funnel adaptor and threw Ramshot Enforcer pistol powder charges using the suitable Lee Powder Scoop, which I found to be less hassle. Conversely, weigh charges individually on the powder scale and adjust to weight with a trickler, then pour them in. Alternatively, you could use their manually-operated Perfect Powder dispensers. With an adaptor, they fit the powder-through die too.

The turret rotates anti-clockwise and indexes near the bottom of the ram’s stroke. The priming arms are L-shaped and fit into a slot in the side of the ram. All you do is drop a primer (anvil-up) into the cup and operate the handle. As the ram rises, the arm is forced in and ends up passing through the shell holder to seat the primer in its pocket. Arms can be left in position at all times as they do not interfere with the operation. I found priming on the downstroke after sizing seemed most sensible, as I would not want to do it under the ‘powder-through’ station, just in case!

Leaving the primed case in place, you will see and hear the turret rotate to the next station as the ram goes down. With a pistol setup, this will be neck expanding/powder charging, and for bottle-necked rifle brass, just charging with a suitable die and adaptor. The third station will be bullet seating, so remember to put it in the case neck. If you require the fourth station, it would be for crimping. Here, I would fit my Lee factory crimp die, which I find aids consistency and reduces extreme velocity spread too. The 9mm set has a taper crimp die as standard. And that’s you done, so remove the loaded round and put a fired case in the shell holder and repeat! You will soon build up an operating cadence and the advertised production rate of 200-RPM is achievable.

One of the advantages for me was the ability to just load exactly how much ammo I needed, without all the hassle of changing individual dies. I found this useful when making small batches for load development.

I’ve owned lots of progressives but never a turret, so it was an interesting and instructive exercise to test one. The Value Kit will suit the new reloader or someone wanting to up their production a bit, personally, I’d just buy the machine as I don’t need the powder handling or case prep accessories. As I don’t shoot any pistols these days, I’d go for the Classic 4-Hole model but for a club shooter who has a Long Barrelled Revolver or pistol calibre lever-action rifle, along with say a .223 Rem rifle, it’s a nice cost-effective setup and well worth a look!