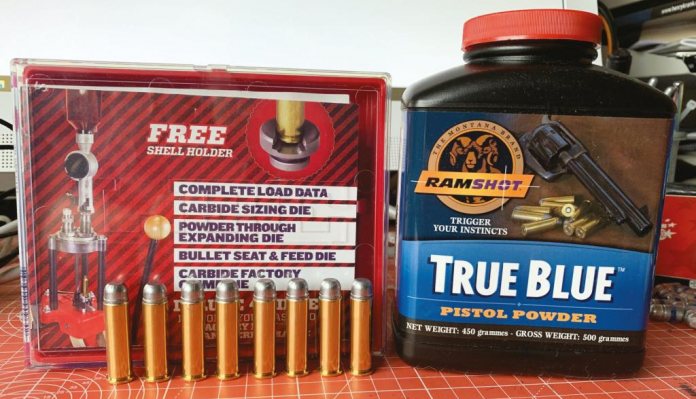 It has been an awful long time since I reloaded that classic revolver cartridge the 357 Magnum and its shorter sibling the 38 Special. However, I was sent a Uberti 1873 lever-action rifle by Henry Krank & Co Ltd. for testing the other month and, as well as using PPU ammunition, I decided to turn out some home loads. So, they kindly supplied me with all the makings: PPU 357 mag cases, 158-grain semi wadcutter (SWC) bullets and Ramshot True Blue powder; and, to put them together, a Lee Deluxe, 4-die, carbide reloading set.

You may be wondering why the designer would put Carbide into loading dies; well, the material is hard, but requires no lubrication as you would need with steel, so making it just as easy to re-size the brass without all the mess of using a case lube compound. It shows as a short ring of the material in the mouth, which is long enough to full-length size. Given the re-sizing die is the one that probably does the most work, then it makes sense; or, for that matter anywhere, where multiple, repetitive operations are required.

Lee have this covered too with another Carbide insert in the second seat/crimp die too, as there are two in this four die set. In the reloading process, the case can sometimes swell or deform a little, so the final pass in the last step of the seating and crimping process of securing the case to the bullet, this further re-size ensures ease of chambering and possibly extraction too. This is equally important for a revolver or lever-action, due to the nature of the design.

Loading a straight-walled, rimmed cartridge case is a little different to a rimless type, as the neck must be expanded or flared to accept the base of the bullet as it enters and is positioned to the correct COL (cartridge overall length). It then has to be closed up after seating and, as this sort of design headspaces on the rim, it’s essential that the bullet is crimped in suffi ciently, to avoid the adverse effects of the pull of recoil. If not done, or done incorrectly, recoil forces will cause the bullet to pull out of the case, with obvious results.

This then requires more processes than a bottle-necked, rimless rifle-type that are so common today. For example, you get size and de-cap first, then neck expand, followed by bullet seating and crimping. It’s favourite to re-prime before neck expansion, as you can also use that station to dispense powder. Depending on your views, you can miss out on the Carbide seat/crimp and stop at the standard version.

The Deluxe set comes with four dies as mentioned that consist of the following. The full-length re-sizer has the Carbide sizing ring in the mouth, the de-capping and internal neck sizing rod is retained by a tensionadjustable collet. If it meets any obstruction, it simply slides up, so avoiding damage to the de-capping pin. A point to note here, is that the collet may not always be tight from the box, with the result you could end up with the rod assembly stuck in the case. So, it’s vitally important to check it’s secure enough before starting the process.

The Carbide re-sizer/de-capper is not essential, as you can lube a standard steel version, but if you’re producing ammunition on a progressive, multi-station reloading press, it makes sense as you won’t have any worries if a case has been lubed or not; or, have to stop to wipe it off, as lube will contaminate the powder if they get together.

Lee’s expander die also offers a threaded top section that accepts a funnel adaptor, should you want to fill it with powder in the process. In terms of the amount of neck flare, it’s recommended as little as possible to increase case life, but enough to easily insert the bullet (base-first). This is adjusted by screwing the die in or out accordingly, too much and the case mouth will look like a trombone, and cause cracking or early failures. Not enough and the bullet could crush or damage the case.

So, you should now have your batch of brass sized, primed, expanded and filled with powder, time to get the bullet in. The seat/ crimp die uses a floating seater punch, controlled by an adjuster screw at the top. Loading manuals will indicate the COL required, Lee include a data sheet with every die set that offers an ample choice of powder types and bullet weights. As rimmed cases need crimping, bullets have cannerlures (crimping groves) to suit. The trick is to adjust the depth first to set the seater punch, then the die is screwed down in small increments to apply the right crimp. Too much can cause damage to the bullets nose. Also note seating too low will increase pressure; never a good thing.

Alternatively, or optional, you could go to the Carbide crimp and post-size die, to ensure that the loaded round will conform to any standard chamber for that calibre. Again, screwing down the die will alter the amount of crimp as mentioned. But the case will get sized on the way in and out regardless.

The job is easy enough but go steady on areas like crimping and bullet seating until you get it right, I’d recommend making some dummy rounds up, to refine the process and your skills. The end result will be good quality and consistent ammunition. Apart from the comprehensive data sheet Lee supply, they also include a shell holder, which is something you have to buy as an extra with other manufacturers.

Also, on the menu is their yellow powder dipper, you may see them and think, why? But they are surprisingly accurate for what is a simple, ‘scoop and level’ system and saves the hassle of weighing charges. They are all graded as to calibre, for example the 38/357 set comes with a 0.5CC dipper, that depending on powder type, will give varying weights in grains. For example; it will throw 6.2-grains of Vit 3N37, or 4.6-grains of Vit N320. Lee also offer their Powder Measure Dipper Kit, that includes 15 graduated dippers from .3cc to 4.3cc and a slide card powder dispensing chart.