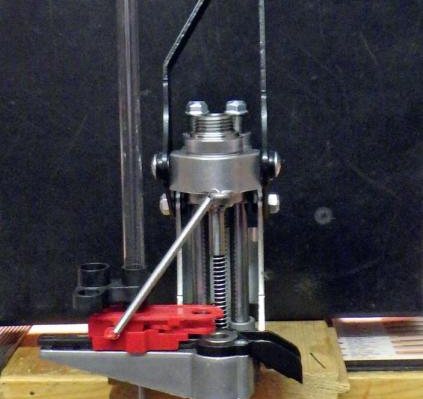 It is not often that Lee rolls out a new press, and when they do it tends to be something pretty innovative and different. The Automatic Processing Press, or APP for short, is unlike anything else in their range. It is designed specifically for preparing cases and sizing bullets but also works as a single-stage reloading press.

The APP is a ‘frameless’ press, with the action transferring through a linkage system rather than a fixed frame. This means that both visibility and hand-clearance are better and there is almost unlimited access to the die. The operating handle is centralised and counterbalanced with a spring to stop it falling forward and guillotining a finger. The clever part of this new design is that the die can be mounted in either the upper or the lower part of the press depending on what operation you are running. The carrier travels on two substantial vertical bars and there is no play during operation.

The box containing the APP feels reassuringly heavy and when you open it up the press itself is a chunky and solid bit of kit. However, also included are a worryingly large number of plastic bits and if you are used to using highly engineered metal equipment, they tend to be a cause for concern.

Fortunately, once you read the instructions it becomes clear that not all of these parts go onto the press at once. You have to choose the right size for the calibre you are processing. The plastic parts are actually pretty well made and if they were manufactured in metal they would push the price of the unit up considerably.

As well as an automation kit which feeds cases or bullets into the press and a bottle to catch sized bullets or spent primers, the box also includes three X-PRESS shell holders. These are a ‘through design’ which allows cases to enter from one side and exit through the other, speeding up the process considerably.

You will need to purchase additional equipment for each process that the press will be used for. There is a primer pocket swaging kit, a bulge buster kit (which restores certain rimless cases that have bulges) and a breech lock bullet sizer kit. The first two of these might not have many applications in the UK unless you are using cases with crimped-in primers or one of the rimless semi-auto calibres supported by the bulge buster range. The bullet sizing kit, however, is available in a large range of sizes and will be very useful to anyone casting their own bullets.

The APP can be bolted to a suitable surface or fitted on the Lee Precision Bench plate system. It accepts the Lee Breech Lock bushings in both the top and bottom carrier so will accommodate any 7/8-14 dies plus any standard shell holders will fit the press. For simple tasks, like resizing or de-priming, the die and shell holder are installed in the same way as on any other Lee press. The spent primers and dirt collected in the bottle under the shell holder. In common with any single-stage press, the dies can be changed over quickly using the breech lock bushings.

The automation kit will feed either bullets into the sizer or cases into the X-PRESS shell holder and speeds up the whole operation. It includes drop tubes and the feeder itself, which features a unique set of ‘jaws’. These grab and carry each bullet or case from the feeder tube to the shell holder. This clever piece of equipment very precisely positions the bullet/case every time and during testing it never missed.

There are several ‘risers’ in the kit, which sit on top of the case inserter to suit the height of the cases or heads being fed, and you simply choose the correct one. This is where that worrying number of plastic parts comes into play but thankfully you only actually use two of them at any one time! This is a bit fiddly to set up and get right but once you have everything in position the feed system works very well.

If you want to increase the feeding capacity then you can add the Lee Universal Case feeder to the APP, which gives you four feed tubes instead of just one.

For bullet sizing, you will need a Breech lock bullet sizer kit plus a sizer and punch set of the correct diameter. Projectiles are loaded into the feed tube, nose down, and the feeder assembly then positions a bullet over the sizer with each stroke of the lever. The punch then drives it nose-first through the sizer where it then drops into the bottle below. This is a very fast and effective process and the results are very consistent.

Overall, the APP is very clever and well made. It is really well priced and despite the fact that the add-on kits all cost extra, it is still good value for money. If you do cast your own bullets then the bullet sizer set up is fantastic and by far the best/fastest way of sizing your lead. As a single-stage press it works great and the X-PRESS shell holders are a brilliant idea. Although the number of plastic bits was initially a concern they proved to be totally justified and worked well.