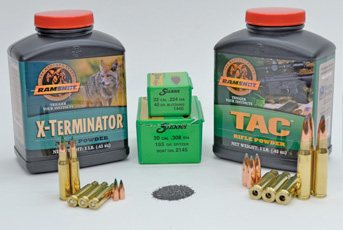 Ramshot powders are now being distributed by Henry Krank and I decided to run a test on two of the most popular offerings to see how UK shooters might benefit with this popular American brand. Newly manufactured in Belgium, Ramshot promise their powders to be consistent from lot-to-lot with no sign of ex-military origins.

Ten specific blends are on offer for rifle, pistol and shotgun ammunition, all being double-based featuring nitro-glycerine along with the usual nitro-cellulose content of smokeless propellants which simplistically, increases energy content. The two powders on test were both spherical ball propellants (which pack together tightly) and this alone allows higher bulk density (more mass of powder in the case). During bulk reloading, these ball powders flow and meter more easily with no `crunching` or `bridging` of powder in drop tubes. Consistent charges can be measured and delivered at higher rates than possible with extruded kernel propellants. For hunters or target shooters consuming large amounts of ammo, volume and speed is king when reloading, especially if using progressive reloading presses.

I decided to try X-Terminator and TAC powders in my .222 and .308 rifles. Loading data is available free of charge from Ramshot’s website and can be printed out in PDF format along with burn rate charts to help identify which products are either most suitable for your calibres, or closely related to your current favourites. I assembled some textbook loads using PPU brass, Sierra 40gr Blitzking Ballistic tips in the .222 and 165gr Gameking soft points for my 308. Taking the minimum and maximum loads suggested in their data, I added three intervening stages, all loaded to identical cartridge overall length (COL) and got on with some ladder testing.

RELOADING IS A JOB, NOT A HOBBY

Load development can sometimes be infuriating with the possibility your specific rifle might dislike any one of your chosen components but fate smiled favourably on me and both guns showed immediate promise. Muzzle velocities rose progressively as charge weights increased and an accuracy node became apparent with further ladder testing. Each rifle displayed accuracy in accordance with their previous load development history with groups sub-1/2” at 100 yards.

With 20” barrels rather than the 24’s listed in the factory data, it hardly surprised me to fall a little short on speed estimates but I was impressed with the low extreme velocity spreads of 17 and 36fps respectively from 10-shot strings. These are very basic hunting loads, not highly developed accuracy loads and low extreme spread (ES) may be thanks in part to consistent brass too. I experimented further using a Redding powder measure rather than the electronic trickler from the first session and this higher speed, greater volume procedure hardly altered figures, in this respect. Ball powders are a delight to use as ammo gets churned out by the 100 in no time at all.

I have nothing but confidence in these powders for hunting loads. Only time will tell of effects on their performance consistency across wide temperature ranges but as American shooters usually experience this to a far broader extent, I’m not worried. The golden nugget is the price. After travelling back and forth across the Atlantic Ocean, £32.50 per lb. looks like great value for money.