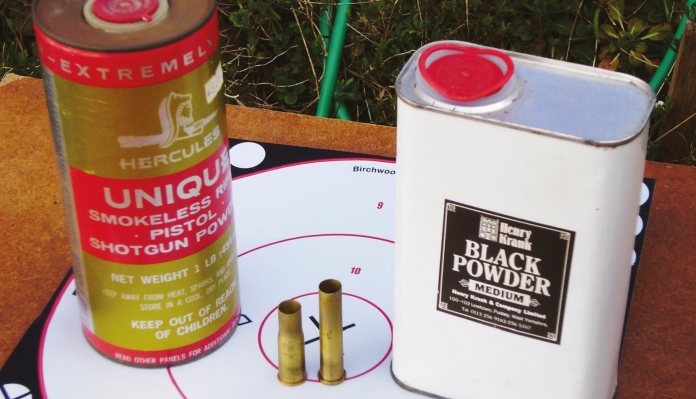 If duplex and triplex only mean styles of divided housing or windscreen construction, then this month’s scribble could be a trip into the heart of darkness! The grammar school survivors amongst you will recognise their Latin base, duplus and triplus meaning double and treble. Yes, we’re concentrating on double and treble powder charges but before I go any further, let’s get the caveat out of the way. The use of charges of differing propellants in one cartridge can have catastrophic effects, especially if these different materials are allowed to mix. Any attempt to reproduce any of the experiments and data published herein are carried out at the express liability of the reader.

I DO NOT mean double and treble charges of the same propellant… we are investigating the charging of a cartridge with either two or three different and segregated propellants. Under no circumstances should they be allowed to mix. So why should we bother with such a risky endeavour?

There are a number of reasons for such constructions; the first involves black powder (BP) in older cartridges. Giving it a ‘gentle’ nudge with a small charge of nitro can enhance the resulting ballistics, such as better velocity, with little change in recoil or pressure. Furthermore, it can reduce the level of BP fouling. Next is the optimisation of large bore case capacity. Then there’s modification of internal ballistics to make better use of bullet weights and designs that fall outside original parameters of a cartridge. History also plays a part, the practise beginning in the very earliest days of smokeless at a time when only a few powder types existed and when factory ammo was still BP-based. Finally, there are the inveterate experimenters… like me!

Duplex BP/smokeless construction was the subject of experimentation from the very earliest days of nitro powders. Indeed, there is the widely quoted but seemingly apocryphal 3:1 rule. It implies that 1-grain of smokeless will produce the energy of 3-grains of BP. Ergo, a safe 65-grain BP load could potentially be reduced to 56-grains over 3-grains of smokeless, or 50 over 5. However, it dates to those early times of smokeless, pre-dating modern Magnum primers and really fast powders, therefore making it potentially destructive if used indiscriminately!
Keeping the two or more charges separated is essential, the original BP method was to design a brew that resulted in a compressed load, thereby reducing or eliminating particle migration. Separation of loads of less than a density of 1 (100%) using cut discs of filter paper or tea bag film are fraught with danger, even if a top filler such as Dacron is used. However, a membrane can be used in a compressed load to prevent migration, especially where fine particles or grains exist.

Duplexing or triplexing nitro propellants is perhaps the most dangerous hand loading endeavour. Unlike BP, the deflagration behaviour of smokeless powders is modified by its containment pressure. A safe and simple demonstration of this behaviour can be conducted in a .38 Spl cartridge with an early smokeless propellant such as Unique.

Let’s assemble a cartridge using a 110-grain jacketed pill employing a safe degree of neck tension and a mid-sized charge. The chances are that when we fire it in a short-barrelled revolver, we will get a significant amount of partially burnt powder residue. Do the same experiment with a 200-grain lead bullet and a heavy roll crimp and there will be little, if any remaining residue. Pressure was the key. This means that a fast starter charge can significantly change the ballistic environment in a nitro layer cake, even if the elements are segregated. If they are mixed… it could be kaboom!

My most extensive duplex nitro experiments were conducted with the .357 Remington Maximum cartridge and were prompted by various reports of the early triplex work by Dick Casull on his stretched .45 Colt, the .454 Casull. Having established that one of the slowest propellants that could optimise the performance of the cartridge with heavy 35 calibre rifle bullets was Hodgdon H4227, I set about ramping the deflagration curve by duplexing with a fast initiator. At the time, I had a quantity of a Bofors single-base propellant that was known to be much faster than Norma R1, 700X or HP38. I had tested it in 9mm, getting almost 1000 fps from 2.4-grains pushing a 123-grain FMJ. The chosen ‘bulk’ powder was Hodgdon H4198 (sometimes listed as faster than 4227 – but empirically not in the Max). I started with one grain of Bofors beneath a lightly compressed charge of H4198 lit by a small pistol magnum primer.

Charges were dropped via a long tube funnel in order to minimise later settlement. The 180-grain Speer #2435 rifle cal pill chronographed around 1560 fps with modest recoil and no pressure issues in the Remington brass, slightly less than my best results with neat H4227. Incremental additions of 1/10-grain took me to 2.1-grains of Bofors beneath the lightly compressed charge, the recorded series of 12 results showing an alarming exponential track. The mean velocity had reached almost 1760 fps but the 10 shot SD had spread from an impressive 9 to 28.

A parallel test with the weaker but more capacious nickled Federal brass saw the signs of impending separation. Primers were flattened but not blown. A test using small rifle bench rest primers in the Remy cases with the same load was abandoned for two reasons, the Dan Wesson strike failed to consistently pop the primers and when it did, some cases split. The experiment was abandoned at that point, mainly because the handgun ban was almost upon us and my toys were evacuated to Belgium.

URNING BACK TO FRONT?

Another variation on duplex loading is the ‘Front Ignition’ process. It has been a fundamental part of some larger calibre ordnance from .50 cal to artillery shells for many years. I’ve not had the time, materials or nerve to experiment with this process. Here a flash tube extends from the flash hole through the powder column towards the base of the projectile. In some instances the tube has perforations and the powder column may comprise from one to three or four layers of propellant.

The likes of Elmer Keith claim to have experimented with the process using duplex charges. Here, the slower bulk charge is intended to start the deflagration process with the faster base charge finishing the process and in so doing, extending the peak working curve of the gas as well as acting as a ‘cleaner’. It is claimed that more of the ‘work’ is completed inside the case, thereby extending barrel life. For the bibliophiles amongst you there are a couple of tomes that make further reference to these techniques;- ‘Gibbs Cartridges and Front Ignition Loading Techniques’ by Roger Stowers and ‘Reloading Buffalo Rifles of the Old West’ by Mike Venturino. The 454 Casull data was reproduced from the “Supplement to the Handbook for Shooters and Reloaders” Loading Data - Theory Practice - Wildcat Cartridges by Parker O. Ackley. But I finish as I started: duplex and triplex loading techniques though fascinating are potentially dangerous and I would not recommend anyone to go there: CAVEAT EMPTOR!