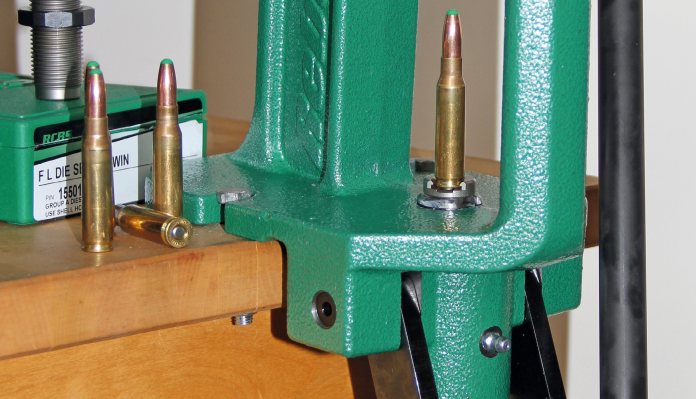 My very first reloading press, way back in the early seventies, was an RCBS Partner press, and it was all I could afford at the time. It was the junior press to the RCBS Rock Chucker and I still own it. Currently, it is fitted to a reloading cradle made from the salvaged wood off an old Laura Ashley chair!

RCBS’s new addition to their reloading stable is the Rebel, which is the latest in a long line of reloading products dating back to 1943 when the company was founded. This is the next generation of cartridge reloading press from RCBS and what an absolute cracker.

It is a single-stage press made from cast iron which is seriously heavy-duty in nature, being 22% heavier than the RCBS Rock Chucker Supreme. It shows a wider base for maximum stability and an even footprint on the bench. Access to the loading area is increased with the tallest opening of any RCBS single-stage press. All the working surfaces are precision machined for very tight tolerances.

Features include primer ejection from the bottom of the ram, an ambidextrous extended handle, RCBS Zerk fitting (grease gun nipple) for lubrication and a limited lifetime warranty.

Straight from the box, the Rebel is an impressive beast. It’s massive and heavy, but in oh such a good way. You need heft and stability in a reloading press - especially for the larger calibres - to stop any torque or misalignment as you re-size or seat a bullet. This press weighs in at some 28 lbs, so is no bantamweight and has the overall dimensions of 15x5x10” (height, wide and depth).

The Rebel is pre-assembled apart from the handle, which is 14.25” long and includes a large 2” plastic knob. Just screw it into the toggle block that has a right or left option with a slightly angled interface. It provides great leverage and pressure for resizing precisely and has two flats cut into the 0.75” shaft, so a spanner can be used to tighten it. A handy feature, as mine are always coming loose.

The frame is typical RCBS green stove-enamelled, so it is hard-wearing and resists oil and lubes extremely well.

It shows a typical enclosed O-frame and a 0.5” thick pad that fits to the bench via two cut notches, so bolts up to 0.75” diameter can be used. The front and rear pillars are substantial in build, with the top frame loop being 1” thick and 2” wide ensuring that this press does not flex at all!

The actual frame opening is large at 4.6” when compared to the smaller Rock Chucker, so access to both sides is not impeded, yet the strength is still there in the frame where you need it. The bottom lever section or toggle block is suitably massive and all the other moving parts are machined steel or have steel guide pins for longevity.

The Rebel not only looks good, but it also feels and runs very smoothly too. At the heart of the press is the central ram column which has a 1” diameter. It is precision ground for a silky-smooth glide between 3.35” of capture in the bottom of the cast press support. This is kept smooth by the Zerk or grease nipple at the rear which is a really good idea and keeps things moving along. The ram/ column is 9” long and has a very positive stop when compared to some presses with a cam-over action.

From the bottom of the throw to the top of the presses top frame bar is 4.5”, without the shell holder or a die fitted. These fit with the standard 7/8” thread to the top section of the cradle in a large steel insert.

There is no on-press priming option but you still have the spent primers being ejected down the centre of the ram column and ejected rearward. I prefer to prime off press anyway.

I fitted an RCBS #3 shell holder and a full length die set for the .308 Win cartridge. I ran the ram column up and down to check alignment and the Lapua case entered perfectly concentric to the die, so everything was aligned correctly. It was equally as good with .300 Rem Ultra Magnum reloads too, so size is not an issue. Some .17 AK Hornet loads were similarly accurately reloaded with a good feel to this brute of a press.

Leverage is very good, partly due to the long comfortable handle but also the camming action mechanism for the ram column. You are able to full length resize with total control of the case, with enough feedback from the Rebel so you can feel the brass move or bullet seat.

The O-frame opening is not off-set like some presses, it is set at 90° to the front of the unit, but you can still see very well to reload from both sides.

This is no entry-level reloading press but it can be the only press you need for all your reloading chores. It is a very strong O-framed cast iron press with steel linkages and machined parts for overall beefy construction. This is a Rebel with a cause and that’s precision reloads!