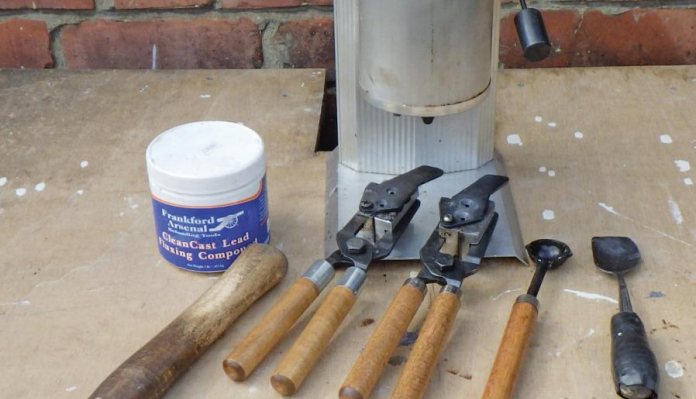 If you are going to start casting bullets then there is going to be an upfront outlay. How much you spend is up to you, but if you are looking at how long it will take to recoup the initial expenditure then you might want to keep it to a minimum. So what do you need to get started casting your own bullets?

The main piece of equipment you are going to need is something to melt your lead, and by far the most common option is an electric melter. The Lee Precisions Production Pot IV is widely available and represents the ideal choice. It features a pot which will hold about 10 lbs of lead and uses a 500-watt heater coil to melt it. There is a thermostat to control the temperature and a spout on the bottom where the flow of lead is controlled by an externally mounted lever.

The 10 lbs capacity will allow you to produce a few hundred of your ‘average’bullets, which is probably enough for one session. The thermostat allows you to get the initial melt done pretty quickly, by setting it to maximum, and then turn it down to keep the lead flowing without overheating and ‘burning’ the molten alloy. Melting pots with a bottom pour spout allow you to discharge molten lead directly into the mould and control the flow. If you do not have such a spout then you will have to scoop the lead out of the top of the pot and pour it into the mould using a ladle. If you do not want to go electric, then you can use a cast iron pot and transfer the lead the same way.

You will also need moulds, which are calibre and bulletstyle specific. They generally consist of the mould block itself, made up of two halves, and the handle assembly for holding, opening and closing it. Some come with the wooden handles, but others charge extra for these.

The mould blocks can be made of either steel or aluminium, with both having advantages/disadvantages. Aluminium moulds are much cheaper, so they will pay for themselves quickly. They also heat up a lot faster, so you are casting good quality bullets much sooner, and they are lighter than steel. However, with the melting point of aluminium being relatively close to that of lead alloys they can sometimes overheat and get a bit ‘sticky’ if not allowed to cool. If they get really hot they can be badly damaged and the alignment pins can work loose.

Steel moulds are much more durable and will stand up to both the heat and wear much better. While they take longer to get up to working temperature they will not be damaged by overheating or get sticky. If you drop a steel mould it is most likely not going to be damaged but do that with an aluminium mould and it is probably going to be ruined. Steel does of course rust, while aluminium doesn’t, so you need to store steel dies more carefully.

Moulds come in different capacities, with one, two, or even six cavities and while the versions with more cavities do speed up production, it can be harder to keep their temperature right while casting. Unless you are wanting to churn out a huge number of bullets in record time it is best to stick with the one or two cavity examples.

There are a number of smaller items needed to get you started, including screwdrivers, pliers, and a stirrer or small ladle. A large dessert spoon can be altered and shaped to stir right to the edges and bottom of the pot plus makes an ideal tool rather than buying one.

When you open the mould to release the bullets they often stick, so you need a wooden tool to tap them out. You can buy a purpose-made mallet but a hardwood stick or hammer-handle works just as well and is far cheaper. When the bullets leave the mould they are still soft and can be damaged, so you need some form of cushion to drop them on. An old cotton towel, wrapped around a pile of old newspapers works just fine.

Flux is a material that is added to the molten alloy to help displace impurities and help the various components to mix fully. You can buy commercial flux or you can use other materials such as sawdust, beeswax or even bullet lube. All seem to work well.

If you are going to use reclaimed lead of any kind it will need cleaning. This can be done in the electric melter but this means making it dirty and introducing contaminants that then have to be removed before you can cast good clean bullets. An old heavy pan, or large iron ladle, over a camping stove works well for melting down and cleaning your alloy.

A thermometer can be useful for controlling the temperature of your alloy, but can be expensive and are a luxury rather than a necessity. Another great piece of kit is a lead hardness tester. There are a number of types available but the Lee, press-mounted version is easy to use and economical. Extra items like these can be added to your set-up further down the line if required rather than being purchased at the start.

So the Lee Precision melting pot is great value and the best, if not the only choice. When it comes to moulds, I would recommend just buying one to start with, and I exclusively use aluminium ones because the advantages significantly outweigh the disadvantages. Whether you buy or make the ancillary items is up to you, but homemade ones will save you money and work just as well. With the basic gear detailed above you are pretty much ready to start casting. Next month types and sources of lead and alloys will be considered in detail along with the issues of bullet harness and mixing alloys.