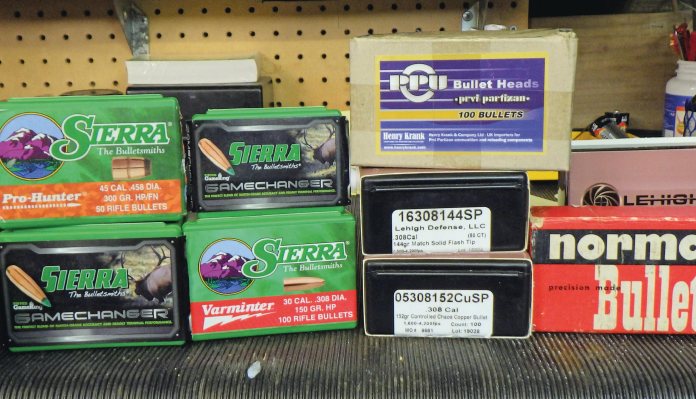 When you start reloading, the choice of bullets can be somewhat overwhelming. There is a large selection of brands and each one of them produces several different shapes, types and weights for each calibre, so where do you start? If you are new to reloading and have purchased a batch of reloading components, you have probably worked up a satisfactory load with whatever you have purchased, but there can be advantages to trying different bullets.

Lighter bullets need to travel faster than heavier ones in order to carry the same power. This is less relevant to target shooters than it is to those who go stalking, but it also contributes to perceived recoil which is important to all shooters. Lighter bullets tend to cause a ‘snappy’ or sharper recoil whereas a heavy bullet produces more of a push or ‘roll’ in the shoulder. Another interesting fact is that heavier bullets generally require less powder to get them up to speed, so they can actually be more economical to use.

Lighter bullets also have a flatter trajectory, making them easier to use at a variety of distances within their effective range without having to adjust your sights too much, which is why they are popular for fox shooting at night. The trajectory of heavier bullets is more of an arc and less easy to compensate for at different ranges.

Bullets, in common with anything designed to fly, tend to benefit from a pointed front end to improve aerodynamics and energy efficiency. The point reduces ‘drag’, so less energy is lost due to air resistance, and it also helps reduce lateral drift, caused by crosswinds. For this reason, pointed bullets are considered more accurate for shooting at longer ranges than other shapes and most centrefire rifle bullets are of this design.

Another design feature that can help improve the accuracy of a bullet in flight is a boat tail (BT), where the base of the bullet tapers slightly at the rear. This also reduces air resistance and rifle bullets that have a pointed tip, as well as a boat tail, are considered to be the most accurate. These bullets are also easier to handload, as they sit in the case better and seating starts off much more smoothly.

Flat pointed bullets, while losing accuracy and energy retention compared to pointed bullets, have other advantages for certain applications. The flat point usually increases the ‘stopping power’ of the bullet by increasing expansion and bullet retention on impact, so they have applications for shooting game. The advantage for target shooters using flat-nosed bullets is that they punch much neater, easier to see and score, holes in the target. Taking this to its extreme, full wadcutter (WC) bullets are totally flat at the front end, over the full diameter of the bullet, and while being as aerodynamic as a double-decker bus they are very accurate and punch a perfect hole in the paper. They are great for longbarrelled revolvers and also lever-action rifles. However, in the latter type of gun, they cannot be magazine-fed as the cartridge overall length (COL) is too short for the mechanism to handle. Semi-wadcutters (SWC) have a ‘stepped’ flat nose design, are almost as accurate as full wadcutters, and will feed through a lever-action, making them a great compromise.

Hollow based bullets have two distinct advantages. On firing, the hollow base expands (obturates) to give an improved seal with the bore of the gun and reduce leading. The projectiles are also longer than solid-based bullets of the same weight, and the weight is further forward, improving their stability in flight. Hollow-base wadcutters have always proved to be the most accurate bullets in my long-barrelled revolver.

With the exception of those still used in black-powder guns, lead bullets are now hardened by adding other metals like tin and antimony. This means that the bullets can withstand higher velocities without leaving lead deposits in the rifling and they are less easily damaged when they are chambered. For higher velocity applications, bullets with copper jackets are used, as this protects the softer lead core from the heat and friction of firing. The copper can either cover the entire bullet, as a ‘Full Metal Jacket’ (FMJ), or the tip of the lead core may be exposed giving you a ‘soft point’ (SP) or ‘hollow point’ (HP) design. The combination of a copper jacket and a softer lead core produces bullets that will expand in a very controlled way, making them ideal for stalking applications. If you are finding a lot of lead deposits in your barrel, the bullets may be too soft and you should try changing to a harder brand. For full magnum loads, you ideally need to be using jacketed bullets. Solid bullets, made of copper or brass alloys, represent the most recent developments.

Modern technology allows them to be made to extremely tight tolerances resulting in superb consistency and accuracy.

Hollow point bullets specifically for target shooting are also an option, with the improvement in the meplat (tip) of the bullet greatly enhancing their performance. Some bullets have plastic tips, to protect the front of the bullet, improve the aerodynamics of the projectile and promote the controlled expansion of the bullet.

Matching a bullet to your requirements is well worth working on. The type of shooting, whether that is target or game, the distance you are shooting, and the degree of accuracy required are all factors to take into consideration. These, of course, need to be balanced against cost. The higher quality and more ‘technical’ bullets carry a premium when it comes to cost and it might be you save them for best and use a cheaper bullet to practice with.