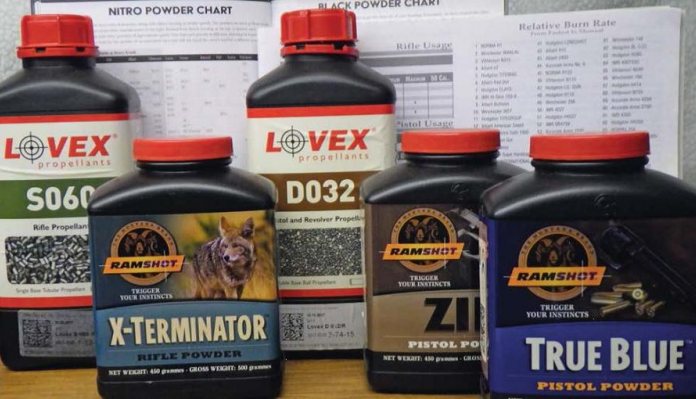 Nearly all smokeless powder manufacturers produce burn rate comparison charts. These show a range of powders with their comparative burn rates tabulated against each other, usually with their own powders in prime position. Looking at one of these charts it might appear that changing from one powder to another is very straightforward, but it is in fact not simple at all.

Source of the data

The burn rates of powders are measured in a special device called a closed bomb, which is basically a sealed chamber in which small samples of propellants are ignited and the rate and force of the burn are measured. Because the rates are measured under laboratory conditions, they are not necessarily produced under the same conditions and variables that reloading ammunition creates. The powder charge is positioned very precisely above the ignitor in the closed bomb, unlike a charge in a case which can move around and lie differently depending on how it sits when the round chambered. All of the organisations that publish these charts state that the information is NOT to be used for developing loads, so why do these charts exist?

Sometimes your existing powder might not be available in the shops or, as we experienced recently, legislation is introduced to effectively outlaw certain powders. Having used Hodgdon’s Trail Boss in my .45-70 Government calibre loads for a few years, supplies dried up when EU restrictions banned its import and I found myself in need of an alternative propellant. Even though we have now left the EU, the legislation remains in place. Fortunately, relatively ‘new to the UK’ brands like Ramshot have taken their place on the shelves.

There can also be times when a load just isn’t working in a particular gun, with poor accuracy or consistency, and if tweaking the load does not improve things then you might need to switch powders. Even when a propellant is listed in the reloading data for a specific calibre, sometimes the loads just will not perform in your rifle.

The same but different

Powders which appear on the same line or next to each other on a chart might have the same or a similar burn rate, but they will also have other characteristics that mean they cannot be simply substituted for each other in your loads. There are a number of differences between powders that mean a straight substitution of one for another is unsafe.

One such difference can be the ‘load density’ (the space the propellant occupies in the case) and this has a direct effect on the chamber pressure, a critical safety factor in reloading. The bigger, or more oddly shaped grains of powder will occupy more space in the case, and some will have more gaps between the grains themselves. This affects the way in which they can burn in the available space. The closed bomb used to measure the burn rates does not replicate the load density or case capacity for each and every load that might be published in reloading data.

The size and shape of the individual grains of different powders can vary enormously and this affects the way they perform in a number of ways. Trail Boss is a good example of this; the large doughnut-shaped grains, with the hole through the middle, means that there is a lot of space in and around the grains inside the case. This relatively large amount of exposed surface area allows the powder to burn very quickly and unimpeded.

Ramshot’s True Blue powder, which appears on the same line of some burn rate comparison charts as Trail Boss, has smaller and more regular shaped grains. These sit more closely packed inside the case with less space between them and so less exposed surface area. The different size and shape of these two propellant grains demonstrate how the amount of surface area exposed - the critical area that actually burns - can vary enormously between charges of the same weight of different powders placed together on a burn rate chart.

Single-base propellants, consisting mainly of nitrocellulose, are usually coated with other chemicals to stabilise them and control the burn rate. The type and amount of coating can obviously vary, even between batches of the same powder. As a result, superaccurate bench rest shooters will normally try to stick to the same batch of powder for maximum consistency.

So to answer the original question, why do these charts exist? In practical terms, burn-rate charts are simply comparison guides intended to point you towards an alternative powder and give you a starting point to develop alternative handloads, not a plug and play substitute. The idea is for you to look up a propellant that is in the same ball-park on the chart as the one you are currently using, then go to the specific reloading data for that powder and develop a new load from a safe starting point.

Having considered why these charts are provided, it is necessary to end with a stern cautionary note: NEVER use a burn rate comparison chart to select another powder and just duplicate the charge weight you have been using for your previous powder.