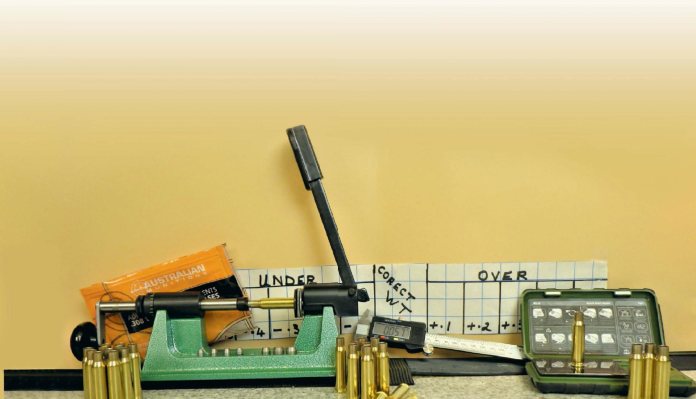 For the average reloader, it is usually enough to just make safe and economical ammunition that is reasonably accurate, using standard and straightforward reloading practices. Precision target competition shooters, however, usually employ further and more complex techniques to produce ammunition that is far more accurate and consistent. Some of those techniques use very specialised and expensive equipment, but some of them are easy and cheap for the average reloader to adopt.

Why uniform ammunition is important

When homeloads are uniform, the bullets all travel along and out of the barrel at the same point in the barrel harmonics (the vibration and flexing of the barrel). They also generate much lower variation in muzzle velocity between shots. Both of these factors contribute to more consistent down range performance. Uniform loads require uniform components and the selection and preparation of those components is vital to achieving the best results. So, how do you take your cases to the next level?

The goal in case preparation is to create a group of cases whose volume, length, neck/wall thickness, primer pockets and flash holes etc. are all as uniform as possible. Different brands of cases in any given calibre vary in dimensions, strength, elasticity and many other factors, so you should never mix cases from different brands in a batch of ammunition. In .308 Winchester, cases from different manufacturers can vary in weight by over 20-grains and all of this weight variance is reflected in the internal volume of the cases. Lighter cases have a greater internal volume, so they can hold more powder at a safer chamber pressure than the same load would generate in a heavier case with a smaller internal volume.

When you’ve selected a brand of case, the first step in their preparation is to sort them all by batch number, and the number of times they have been fired/reloaded. If you neck-size and have two or more rifles in the same calibre, you must segregate the cases for each gun. Rifle chambers can vary significantly, even among samples of the same make and model, so the cases fired in them will vary.

The best starting point is either to use brand-new cases from the same batch or once-fired cases produced by firing new factory ammunition from the same lot and manufacturer in your gun.

Benchrest shooters will often measure the neck thickness of each case with a caliper at different points around the circumference to establish an ‘average’. They might then discard any that vary by more than .001” or .002”. This is time-consuming but there are significant benefits, as the thickness of the case at the neck will affect the grip the case has on the bullet, chamber pressure and muzzle velocity. Of all the dimensions of a case, the neck thickness is possibly the most important when trying to produce consistent ammunition.

The next stage would be to standardise as much as you can on the cases by trimming them to length, chamfering the case mouths, and then uniforming the primer pockets and flash holes. These last two steps make primer and powder ignition more consistent. There are a number of different hand tools available to cut the primer pockets to a uniform depth, remove inconsistencies in the flash hole diameter and remove any burrs around the flash hole.

Another important accuracypromoting step in case preparation is neck turning, which is a process that actually cuts the neck’s wall thickness to a standard dimension around the full circumference of the case. Although this does contribute significantly to the consistency of match-grade ammunition, it may be a step too far for most reloaders, as it requires expensive, specialised equipment. A calibre-specific pilot sits inside the case mouth, while an adjustable cutter shaves the outside of the neck down so that the neckwall thickness becomes uniform.

Because of its close relationship to case volume (which is a bit harder to measure), the weight of cases is a good way to sort them into more consistent batches. Just how precise you want to be is up to you, but many competition shooters sort their cases into batches in which the weights vary by no more than 1-grain, which is pretty picky. The easiest way to sort the cases is to weigh each one and separate them into groups of the exact same weight. There may be several groups, some differing significantly and some that are only 1-grain apart, and ideally there will be a group (or set of groups that are very similar in weight) that contains enough to make up a batch of ammunition large enough for the intended competition.

Some match shooters don’t weigh their cases but rely on shooting tests to separate the good and the bad. They simply load and shoot their cases and retain those that group well.

Depending on how far you are prepared to go to improve your ammunition, a combination of just some of the steps outlined above, and then some further culling using group shooting, is a great way of further improving ammunition consistency and performance.