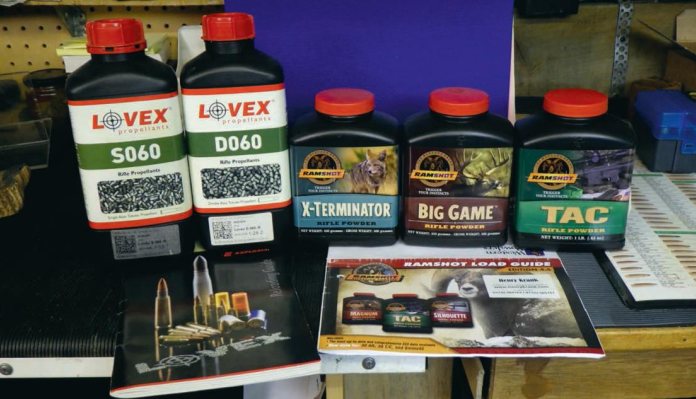 One of the best things about reloading your own ammunition is that you can customize it for your specific needs, whether that’s target shooting, stalking or just plinking. You can select bullet and powder combinations not generally available from a factory, develop loads that are tuned to the harmonics of your barrel and adjust the felt recoil in any pistol or rifle so that the shooting is more comfortable. Reduced recoil is perhaps the most often sought benefit associated with using reduced loads.

Making ‘reduced loads’ means lowering powder charges to less than the starting loads contained in published loading data. There are pros and cons associated with doing this, such as the reduced recoil already mentioned and, allegedly (under some circumstances), guns ‘blowing up’, so significantly reduced loads need to be approached with caution.

The Sporting Arms and Ammunition Manufacturers’ Institute (SAAMI), establishes maximum pressures for most calibres and powder manufacturers translate these figures into maximum charges of their powders to yield that maximum safe pressure. At the lower end of the spectrum manufacturers also publish a starting load, which represents a safe powder charge for you to begin reloading with. There is no minimum pressure or powder charge specified by SAAMI and powder manufacturers produce their starting loads based on their own calculations and a big safety margin (probably intended to protect themselves from potential legal actions). Some also suggest starting with a powder charge which is 10% less than the published starting load, a further, but not a very significant, reduction.

To develop a load, you generally begin with the recommended starting load and increase, in small increments, the amount of powder until you achieve the smallest group size, or start seeing signs of excessive pressures. It is at this point that you stop, even if you haven’t reached the maximum pressure load in the data. That’s all normal and proper. The troubles can begin if you attempt to reduce velocity and recoil by reducing the powder charge significantly below the starting load.

Reducing the powder charge too far below the starting load does some unusual things. Significantly reduced loads cause uneven distribution of the powder in the case, which in turn leads to inconsistent burning, creating irregular pressure waves. One of these irregular peaks of pressure can cause the bullet to become dislodged from the case mouth before the pressure drops again, leaving the bullet as an obstruction. If the pressures then rise again from the burning of the remaining powder, they can become dangerous. If the small powder charge has all lodged up against the bullet, then the primer might not provide enough ignition flame to reach, and properly ignite, some slow-burning powders, again causing irregular pressures. It is worth mentioning that switching to magnum primers is not the solution.

There have been reports that reduced loads have caused guns to blow up but they always seem to be secondhand accounts from people who ‘know someone it has happened to’. No one has been able to reproduce this in a laboratory. It seems highly unlikely that a very small charge can actually blow a gun up, because if it could produce enough energy to do that then surely it would be able to get the bullet moving out of the barrel instead?

The most obvious risk associated with not using enough powder is that it just will not generate enough gas and pressure to get the bullet up and out of the barrel. A stuck bullet can be a nightmare to dislodge and usually requires the attention of a gunsmith.

Less powder generally results in less recoil, making for more comfortable and more accurate shooting. In some circumstances, going below the published starting load can be ‘safe’ and the benefits of the reduced recoil worthwhile. A good and safe example of this is using low-end .38 special loads in .357 magnum cases and guns. Using the published starting load for .38 Special and 148-grain wad-cutters in .357 cases, is similar to going below the starting load for this bullet in .357 calibre and the reduced recoil is very noticeable. There is no sign of pressure problems and the bullet shoots more accurately in the magnum case. With magnum calibre guns being that much stronger than .38 specials, there is of course a greatly increased safety margin against pressure spikes.

When selecting powders, always use published reloading data. You want information that has been scientifically developed and tested as safe. Be careful when dispensing powder. Scales, whether digital or balance beam, have an accuracy of +/- 0.1-grain and if you are already using a light charge of powder, an error of -0.1 grains will exaggerate the ‘lightness’ of the charge even more.

If you are looking for reduced recoil, choose a different powder. Do not try to achieve lower recoil by dramatically reducing the powder load because, as described above, doing this carries risks. You will usually find an alternative powder that will allow you to customise your load to what you need, without having to go outside the recommended load range.

If you cannot find specific load data for your powder and bullet combination, call the manufacturer for guidance. Do not simply pick a ‘near enough’ load and try it without seeking their advice. If recommended in the load data book, use faster-burning powder as these suit light loads/starting loads better.

As with all aspects of reloading, light loads need to be approached with caution. A bullet stuck in the barrel is a real problem to remove and embarrassing! The powder manufacturers spend millions of pounds constantly developing safe loads and it is not for us to ignore their data and go outside their range of safe loads.