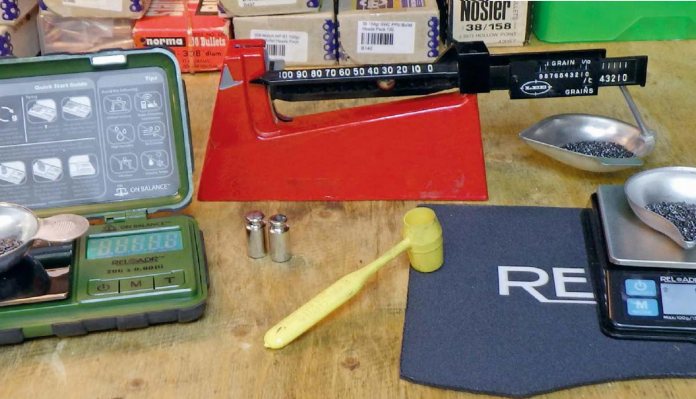 A good set of weight scales is a must for safe reloading (primarily for weighing powder), but they have far more applications than just checking the odd powder charge, and more wide-ranging use of your scales can significantly increase the performance of your reloads.

There are loads of different scales on the market, falling into two distinct categories, beam scales and digital scales. Both types have their uses in reloading and having a set of each is a good idea. With two sets of scales you can use them to check and calibrate each other to ensure that you are getting accurate readings. Digital scales are easy to set up and use and they are particularly good for doing multiple, repetitive weighing. Beam scales are a little bit harder to set up, and slower to use, but they are very accurate and less sensitive to temperature changes.

The most common use for scales in reloading is for weighing out powder, either for each and every charge or for setting up and checking a powder measure. For small scale reloading it is worth weighing out every charge to ensure they are as consistent as possible, but if you are churning out ammunition in volume then checking the first few charges, and then maybe one in every 10 rounds as a minimum is advisable.

If you are weighing out every charge it is best to place a slightly under-weight charge into the pan on the scale and then slowly add more and ‘trickle-up’ to the desired load. The advantage of this method is that it overcomes the tolerance in the accuracy of the scales. If a digital scale is accurate to +/- 0.1-grains this means that a reading of 12.5-grains will be displayed for any charge weighing between, 12.45- and 12.54-grains. By trickling-up to your desired weight, as soon as you enter this accuracy range the display will show 12.5-grains and you know you are at the bottom of this range each and every time, equalling better consistency.

With beam-type scales, this same method can be used to bring the beam level by slowly trickling powder into the pan once the scale has settled down and stopped rocking. You will then get used to bringing the scale up to the desired reading gradually and more consistently.

Not many reloaders weigh their cases, we tend to buy a new box of 100, give them a quick visual check and then get on with reloading, but there are advantages to putting them onto the scales. Cases, like everything else, are made to a given tolerance and so they can vary in size very slightly. Because the external dimensions of cases are the most critical, so they fit into the chamber of the gun, any variances in weight will result in the internal dimensions of the case (where all the action happens) being different. Rather than try to measure the internal dimensions of a case, which is pretty much impossible, you can weigh them and separate out any that weigh considerably more or less than the average. A much heavier case will have less internal capacity, so when the powder charge is ignited there is less space for the gases generated to expand. This causes higher chamberpressure which will affect the point of impact on the target and open up the group. To improve the consistency of your reloads you can weigh each case and group together those which are of the most uniform weight. In a batch of 100 cases this might typically result in you having 80 which are very consistent and 20 which are not. The 20 can be used for everyday ‘practice’ loads and the 80 can be your competition rounds where the better consistency is most needed.

Just like cases, bullets are produced to a tolerance, with one of the very best and well-known bullet manufacturers quoting a figure of +/- 0.6 grains on their general bullets and +/- 0.3 grains on their premium range. This is a very tight tolerance and it is not the same with other makes and types of bullets. Bullet weight can make a big difference to chamber pressure and muzzle velocity, as a simple example a one percent increase in the weight of a particular bullet caused chamber pressure to change by almost 400psi.

A new box of bullets can be checked and sorted into batches of the exact same weight using your scales. To do this, weigh a random selection of bullets to confirm an approximate average, in theory this should be the bullet weight shown on the box. You then take that average bullet and place it on the scale, setting the Tare on the display to zero. The bullets are then weighed to obtain a + or – from the zero setting and bullets with the same reading are placed in batches together. To speed this up you can mark out a simple grid on your workbench with a central point and individual boxes marked with the + and – reading each side of this in 0.1-grain increments. You will often find that most bullets in a batch have an identical weight and a small number will share a different weight. Reloading and shooting bullets of the same weight on one target will improve your group.

If you cast your own bullets the weight of the projectiles you produce will vary from batch to batch far more than factory made bullets do, so a good set of scales can be very beneficial here. The reasons that the weight of your home-cast bullets varies include the make-up of your alloy and air bubbles in your bullets, and they can be hard to control. The answer is to weigh each bullet and weed out any that are significantly heavier or lighter than the rest.

It is rare for home-cast bullets to come out exactly the weight stated on the mould, due to variables like the makeup of your alloy, so you need to establish the actual weight of your bullets and, if necessary, adjust your powder charge accordingly. Again, reaching for the scales will address this issue and ensure you are producing consistent, quality rounds.

Having weighed out your powder charges using the trickling-up method, sorted your cases into batches by weight and checked that your bullets all weigh exactly the same you will have produced a very consistent batch of ammunition. As a final check you can also weigh each completed round of ammo to confirm that, all things being equal, they all weigh the same.

All of these simple checks will improve the performance of your home-loads and it is well worth keeping your scales to hand on the reloading bench, rather than leaving them to gather dust on a shelf. Reloading scales can be one of the most under-used pieces of equipment on the bench, with powder generally being the only component dispensed by weight, but the more you utilise them the more you will realise that they are actually one of the most useful. Fortunately, reloading components are generally made to very high tolerances, but we can fine tune our ammunition even further by spending a bit of time on weight control.