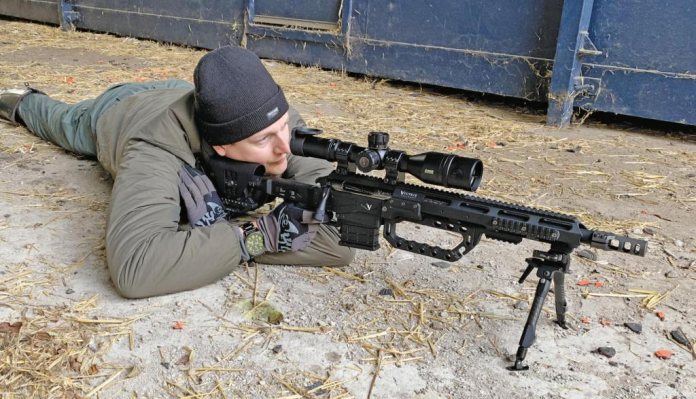 I guess that we’ve all heard of the Ballistic Coefficient, abbreviated to B.C.? Not sure what it means? Well, put simply, it is a ‘measure’ of the ability of a projectile to overcome air resistance in flight. The value is inversely proportional to the negative acceleration (deceleration) of the said projectile. Ergo, a high number indicates a low negative acceleration. The given number is therefore known as a ‘factor’. Most, if not all of the modern reloading tomes quote (or make reference) to this number in respect of the performance of each bullet design for which they provide data. A chart or table then takes this number and details the effect on performance, giving velocity and drop at a range of distances.

Seven algorithms to choose from

However, the coefficient that we use is only applicable to small arms projectiles and then has considerable limitations in terms of particular bullet speed, weight and range. It gets worse, the most often used ‘standard’ algorithm for calculating BC is based upon a bullet form known as the G1 or Ingalls and best represents a flat based, round nose design. It has serious limitations in respect of more advanced constructions and for that reason some BC figures are becoming based upon a G7 form; for that read a Spitzer (pointed) boat tail type. To further complicate matters, there are no less than five more forms upon which calculations are sometimes based. Whilst the G1 has been the default for many years, there is a growing move towards the use of the G7. Modern tomes should tell you which has been used to establish their figures. Not that this is the end of the complication, far from it. Confused? Read on!

The input details necessary to calculate the B.C. factor include the external factors of altitude, temperature, pressure and relative humidity but the final B.C. number has no means of accounting for these conditions. In engineering, it is not uncommon to detail something called STP when specifying high levels of accuracy in manufacturing or testing. Standard Temperature and Pressure provides an environmental ‘level playing field’ that ensures consistency and precision wherever a component is being processed. A similar form of STP is therefore used to establish B.C. Hornady quote the following standards for their projectile testing at Aberdeen Proving ground in Maryland:

I guess you’re way ahead of me! Unless you do your paper punching or hunting at Aberdeen Proving Ground, or somewhere on the English coastline on a nice day, then most of your shooting is NOT conducted under those conditions! So, what happens to our REAL B.C.? The answer is, quite a lot. Indeed, it is this significant variation that forms a vital part of the algorithms used in modern computerised ballistic calculators. Hornady cite a test initially conducted in the ‘standard’ environment that gave a B.C. of 338. They then repeated the same test with an increase of air temp to 89ºF and obtained a B.C. of 355. The next trial was with an increase in barometric pressure to 31.00” of mercury (only found at sea level in places like Siberia) that gave a B.C. of 322. A final test was based upon 21” of mercury, typical for a range at an elevation of two miles, giving a B.C. of 448. At ranges of less than 250 yards or so, these variations do not have a significant impact but for Long Rangers the results are important. A variation of 10” drop at 500 yards is a serious consideration!

These revelations question the way in which we use the long range B.C. tables. Taking the figures for velocity and drop should not be taken as absolute, but as a guide when compared with other bullets. As an alternative, we can use the prevailing range conditions to recalculate an amended figure. Assuming that you know the temperature, barometric pressure, and ballistic coefficient of the bullet, you will be shooting in this non-standard condition. You can calculate the apparent ballistic coefficient of the bullet and otherwise find the trajectory for your non-standard condition site, as the drag on a bullet is largely produced by the density of the air through which it travels. The first conversion factor to correct for changes in air density is the ratio of: Standard pressure / Shooting site pressure

I’ll quote directly from Hornady for the next bit: “Corrections can be made as well for relative humidity, but the correction process is tedious, and the precision gained is negligible. At any rate, while we’ve seen barometers in camp and thermometers on the trail, we can’t recall seeing hunters lugging hygrometers. Besides, we have already captured the primary factors requiring adjustment”.

Which equals 0.9479 and takes our initial B.C. of 338 to 320. We’ll now move the range to one in Colorado at an elevation of around 10,000 feet and a typical atmospheric pressure of 21 inches of mercury. We’ve used the Hornady numbers above to give a result of 1.4062. Multiplying that with our temp corrected B.C. gives us a final B.C. figure of 451.

And the result is? Using the G1 form for our .30 cal, 168gn FPD pill, and taking a muzzle velocity of 3000 fps at a range of 600 yards, by interpolation from the old fashioned charts, there will be a reduction in drop of around 14 inches. From my ballistic calculators, the reduction for the same conditions will be about 10.5 inches.

Changing my calculators to the G7 algorithm, the predicted overall reduction in 600 yard drop has reduced by a massive 30 % (over 20 inches from the G1) and the differential drop reduced to under 4 inches. You pays your money!!