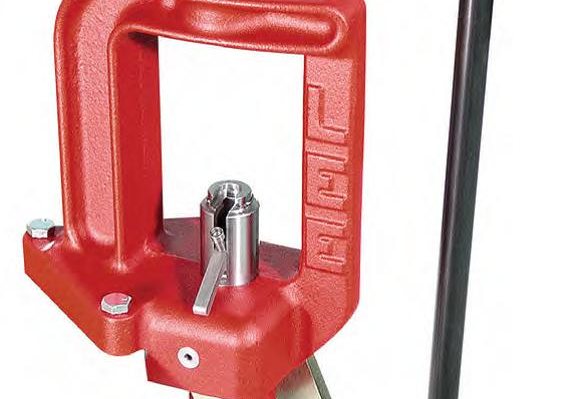 The reloading press is undoubtedly the most fundamental piece of kit in the handloading workshop. Your very first one was probably a second-hand cast-off from someone at the club, bought as part of a reloading ‘kit’ or the cheapest one in the local gun shop. Hardly the best means of selecting the machine at the heart of our reloading activities. Mine was a lightly used O-frame RCBS Jr with a set of steel .357 dies and a shell holder. Stamped near the 7/8” x 14 TPI thread for the dies is the number 69, indicating its year of construction. Although approaching 50, it still gets the job done, well, some of them!

The mechanical concept at the heart of the press, the lever and fulcrum, can be traced to the writings of Archimedes in the 3rd Century B.C. He is quoted as saying: “Give me a lever and a place to stand and I will move the earth.” However, its first use is likely to date much further back in history to the builders of stone circles such as Stonehenge or the Egyptian engineers who raised massive stone obelisks around three thousand years B.C. So, what do we mean? In its’ simplest form it is a rigid beam unequally supported by a hinge or fulcrum (pivot). A small effort over a large distance on the long end of the beam will be translated into a multiplied effort over a proportionally shorter distance at the other end. Ignoring losses due to inefficiencies, the machine is therefore a direct force multiplier in the ratio of the distances moved by the lever.

To reduce that to a simple equation: WORK = FORCE x DISTANCE. Does that mean that all presses are equal? Not a bit of it. In my RCBS Jr machine the first-class Lever principle works well. All other things being equal, upscaling the basic design requires longer and longer handles, to increase working pressure.

Users of pulley block systems or modern bows will be familiar with the improved version of the simple lever. Enter the compound linkage. In the simplest terms it functions as a double fulcrum, however, that does not mean that it doubles the mechanical advantage. Used in the design of the reloading press it serves to even the thrust on the ram over the length of the cycle, as well as generating increased force in relation to the length of the operating arm. Such is the benefit of the compound system that all modern presses incorporate the principle in one style or another. At the lightweight end we have the Lee C-Frame and Lyman Acculine up to the quirky RCBS Summit and muscular Redding Ultramag.

A question that I get from time to time is; ‘what is the most powerful press you can get?’ The answer is not an easy one to give, as the power delivery of compound systems is not always linear. Furthermore, their output is a function of input. Of equal importance is the distance (length of ram travel) over which the force is delivered. As an example, the novel Wamadet press can deliver massive force, but over a very limited distance, ideal for incrementally swaging jacketed rifle bullets, but unsuited to re-sizing .50 BMG brass. Whilst I cannot claim any scientific data to support my claim I would suggest that the Redding Ultramag is one of the gutsiest, massproduction, single stage performers currently listed. My biggest reloading related regret is the fact that I traded my RCBS Big Max, it was a brute of a machine.

The moving components in our presses are all vulnerable to wear and damage from both natural causes (use) and the ingress of abrasive crud released during the various operating procedures. The interface between moving parts can vary. With cast iron press frames, it is not unusual for the rotating steel parts to be fitted directly into the machined holes. Steel parts into cast aluminium are not such a good idea, although Lee persist with this process. Earlier presses often had sintered bronze bearings such as Oilite® (a porous, highly compressed powder), impregnated with a lube – typically a mineral SAE30 oil. If allowed to dry or exposed to fine abrasive dust such as primer residue; Oilite could be easily damaged.

Once these contaminants were embedded in the bearing it was wrecked. Most current makers therefore rely upon close tolerances and owner hygiene to minimise wear. Brushing the ram and other rotating parts with a pastry brush to remove dust residues followed by a thorough wipe with a rag moistened with very light oil will help to slow the wear and tear. Parts that either degrade or lose their function often include detent springs designed to stop the press handle from flopping downwards under gravity. The term spring is rather misleading – the part often being a spring washer or washers. Replacement usually requires the removal of the handle pivot pin.

Cast metals are capable of withstanding huge pressures, but can be vulnerable to shock loading, especially if the load is not aligned with the designed strength areas of the frame. Misalignment of moving parts, especially on turret and progressive presses can contribute to failure. Hammering or shock loading the handle to free a jammed or seized case in a die is another possible cause of breakage. Occasionally the failure is much easier to explain, an area of poor, brittle casting is simply unable to take the strain. Yes, it does happen!