Reloading: Reach for your Manuals 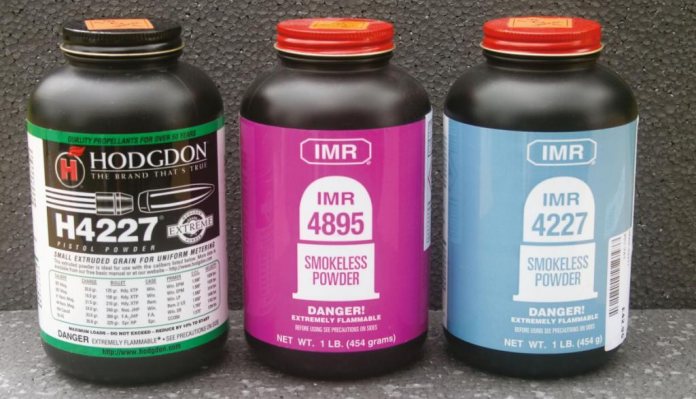 We’ve examined the significant impact on handloading of REACH, the acronym for Registration, Evaluation, Authorisation and Restriction of Chemicals, a couple of times before. Sadly (my word) our impending Brexit will have no effect upon the ongoing implementation of this monster EU regulation, thereby necessitating a further, rather regrettable visit. I quote the HSE, the UK Agency for policing the regs:- ‘We have made minor amendments to regulations to remove EU references but legal requirements, and the protections these provide, will be the same as they are now’. We’re now more than 12 months beyond the banned date for a tranche of vital (for some manufacturers) propellant ingredients and the products containing these chemicals are already disappearing from the shelves.

Remember that these REACH-impacted powders will continue to appear in manuals and Interweb documents published by American companies as the ban is only pan EU. On the plus side, those from Reload Swiss, Vihtavuori, Alliant, Explosia (Lovex- Accurate), Eurenco (Ramshot), PB Clermont, Bofors/Norma and Vectan all seem to be OK. Furthermore, there has been a mini wave of new propellants from the Hodgdon group, many under their Enduron™ banner.

It’s worthy of note that Switzerland is not a member of the EU and, whilst bound by REACH with regard to any materials that they commercially supply to EU countries, is not bound by the importation rules. If the materials above, especially my beloved 4227 and H4831 are available in Switzerland, then I feel a road trip coming on!

Hoarding is hardly an option

If one or more of your favoured powders is now proscribed, then the time has come to develop a Plan B. Don’t bother shopping around, as most gun shops have already cleared their shelves of the popular types - making a last-ditch hoarding raid impossible, and anyway, you’re legally limited to a modest stock level. Start by extending your library to include the very latest data for your threatened calibres. Check out the Interweb pages from the Hodgdon Group to include data for the Enduron™ powders. Using one of the many relative burn rate charts, identify a number of types that sit within the same grouping and then look closer to identify those with the higher loading densities.

Do not interpolate load data from your old design, but start afresh, working up a recipe in the usual way. Whilst your old powder may have worked well across a diverse range of bullet weights, you may find that this is no longer the case, requiring more than one powder type to give optimum results in all your designs. If your ammo parameters are not determined by legal energy parameters, then you could use this opportunity to develop lower recoil, lower velocity cartridges that still meet your requirements. That could mean longer barrel life and reduced production costs.

What about factory ammo?

Despite my best efforts, I’ve found little information regarding the importation of non-compliant factory ammunition. Speaking to a manager at the UK’s leading ammo importer, he confirmed that there had been no changes to the range of cartridges that they were bringing into stock. However, it is worth noting that almost all commercial ammo, especially that from the big brand makers, employs designs of propellant material not available to the hand loader. Given that ball powders are the most common types used in commercial ammo manufacture and are those most likely to contain banned Dinitrotoluene and Phthalate Esters, I cannot believe that all of their ammo is REACH compliant.

The explanation for this apparent contradiction may be the result of claims made by the various European military agencies. The EDA (European Defence Agency – a sort of EU military trades union) has worked extremely hard to produce a document which looks definitive but cynically fudges the parameters of REACH, in order to get as much of their inventory over the REACH hurdles as possible!

If you have the odd weekend available, then it is worth a look:- https://www.eda.europa. eu/docs/default-source/brochures/ eda-member-states-common-position-onammunition- classification-under-reach—- adopted.pdf This, in turn, was largely based upon a 52-page document entitled “Status of Ammunition and Components of Ammunition in the REACH Regulation – Professional Guidance” originally published in 2009 by GICAT, the French ordnance industry trade body. Rather than dealing with individual ingredients, such as powder and primers, they took the entire piece of ordnance as the subject for analysis, correctly arguing that the whole cartridge, described as the “Article”, contains less than the specified minimum ‘’trace’ of 0.1% of the banned substances, I quote: 6. article: means an object which during production is given a special shape, surface or design which determines its function to a greater degree than does its chemical composition (per Article 3, par. 3 of REACH Regulation).

Taken literally, it implies that I could move to a non-EU location, load my small arms ammo with a banned powder and bring it back to the UK. By arguing that my cartridge was the “Article” with a banned content of less than the threshold content of banned material, it would therefore be OK. In practical terms, I would need to have CIP Approval and various import/ export licences; but it was a nice idea!

Lead Styphnate and Antimony Sulfide (American spelling), are key ingredients of most primers currently on sale. These are both chemical compounds on the REACH hate list. Furthermore, another ingredient, barium nitrate, is considered toxic, but not yet sentenced to a ban. While American manufacturers, especially DOD contractors, have been developing ‘green’ compounds for use in small arms primer caps, large scale commercial production and sale of such designs seems to be stalled.

These designs are based around superfine metallic powders, often treated with graphene (a carbon allotrope). The base metal is often aluminium powder, one of the prime ingredients in Tannerite and some forms of fireworks. However, if the EDA defence of ammunition materials does continue to apply to commercial ammunition, then it seems likely that traditional primers will escape the ban for the foreseeable future. Watch this space!