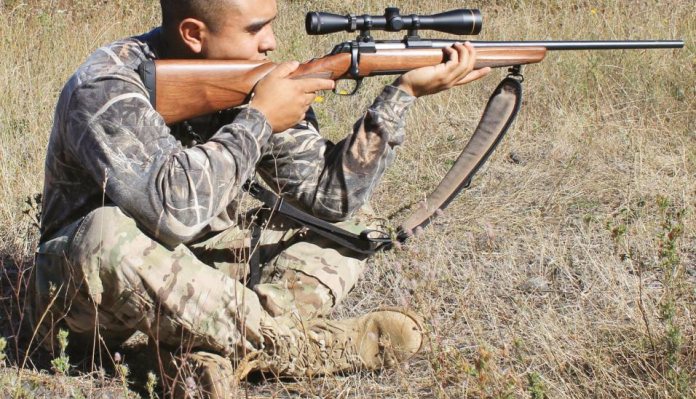 Whenever you fire your gun, whatever the type, Newton’s Laws of Motion kick in. His Third Law distilled to the most basic form. states that “For every action, there is an equal and opposite reaction.” We call it recoil.

Let’s start with a simple formula for all propellant burning firearms;- Free Recoil Energy (FRE) = ½MV². Where M = Mass (or the weight of the firearm, including all attachments such as scopes, brakes and moderators, divided by 32.17) and V = Velocity of the recoiling firearm.

We now have to add a fiddle factor (Constant) to the VPG figure to establish a figure for the velocity of the propellant gases. SAAMI list four, (I quote) as follows;-

The following VPG should be used:

Our final equation for FRE is therefore

We all know that excessive recoil is potentially uncomfortable. While plinking away with a heavy rifle in .22LR it is barely noticeable but firing an 11 lb gun in .458 Win Mag is a different story. Over 60 ft/lbs to be precise. That’s more than HALF the muzzle energy of a bunny bashing .22 rimfire pushing on your shoulder! The resulting discomfort can not only cause bruises but impair accuracy, especially if the anticipation of the recoil causes flinching! It begs the question as to whether you always need to use full loads? Furthermore, for a newcomer or junior shooter, making their first shots a bruising experience is highly inadvisable. Ammo makers, such as Remington and Hornady, have taken this issue seriously enough to produce their respective ranges of Managed Recoil and Custom Lite ammunition. Well, if they can do it, so can we.

No, a simple reduction of your regular powder charge may NOT be the safe way to go. Remember, safety must come first and last. The light loading of many propellants is expressly forbidden by their respective manufacturers for a number of reasons. The chemical composition and surface coatings of many recipes require a minimum threshold pressure in order to perform as designed. Whilst there are many apocryphal tales of ‘low load’ detonation, there is also compelling evidence that the use of ‘off data’ low charges of some propellants can result in potentially dangerous performance.

Reduced bullet weights can assist in the quest for lower recoil but again, will change the internal ballistics of any given powder and may not be compatible with the rate of barrel twist. For hunting, the reduced performance may result in a failure to meet specified energy requirements or insufficient energy transfer into the game.

Amongst those powders best suited to reduced loading, EU legislation has had an impact upon our choices. Fallout from the 2007 Registration, Evaluation, Authorisation and restriction of Chemicals (REACH) has seen a ban on one of the safest and most versatile for reduced loadings; IMR SR 4759. Other notable casualties include H322 and H4198 – oft quoted in many reloading manuals.

On the subject of REACH-affected propellants, another of these (but NOT a candidate for reduced loading), IMR 4007 SSC has become the subject of a TOTAL recall by its makers. Whilst it is no longer imported, stocks still exist in many gun shops and on the shelves of hand loaders such as me. Originally issued in February 2019 in respect of specific Lot Numbers, it was extended to cover ALL product in October of last year. Tubs of powder must be opened and wetted with water, then poured on to the garden as a fertilizer. Loaded ammo must be carefully pulled and the powder treated in the same manner. Check out the official IMR recall note at https:// imrpowder.com/ DO NOT be tempted to fire off loaded rounds as a serious potential risk exists. As a footnote, another recall that did not ring any bells here in the UK was issued by Canadian maker, General Dynamics in respect of three Accurate brands, 2495, 4064 and 4350 manufactured before 1st October 2016. In the absence of specified Lot Numbers, it was assumed to refer to ALL production.

Reload Swiss offer official advice on the subject. They state that reduced loads below 85% are OK, but that one should consider using commercial wadding to keep the powder column stable. Other manufacturers offer warnings and data notes regarding the suitability of each type. Speer manuals include reduced load data for appropriate calibres but sadly, most of the powders are no longer available. As a rule of thumb, reducing charges of the slowest powders listed for a given calibre are to be avoided. UK available propellants that can still be considered for use for this purpose include Alliant (Hercules) 2400, Accurate 5744 (aka Lovex DO36) and the veteran Alliant Unique. Do not interpolate load data from powders of ‘similar’ burn rates or from similar calibres – that’s a recipe for disaster.

If you’re using the ammo in rapid fire comps then the reduced recoil will assist in faster target acquisition. And if you need a further incentive, consider the monetary benefits. You’ll get more bangs for your buck.