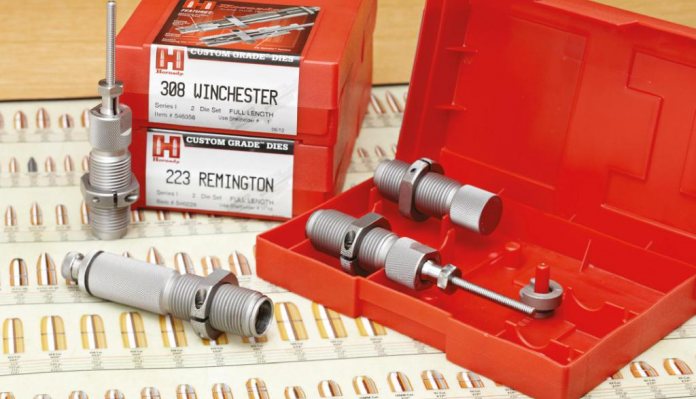 This month we focus our brief ‘starter’ series on the resizing of bottleneck cases and subsequent assembly. All the hygiene issues remain the same as before; keeping to a single headstamp per batch, thorough inspection and cleaning. If you only fire the cartridges in a single rifle, other than a lever-action, then you can reduce the level of rework by only resizing the neck of the case. If you have more than one rifle in each calibre then you could check fit each fired case in each of the chambers in order to mitigate the need for full length resizing at each reloading.

Not that this lets you off the hook forever! The neck-only sizing process does not address all of the insidious growth of the case during each firing cycle, meaning that sooner or later the bolt will become stiff to close as the cartridge shoulder is forced against the chamber. Full length resizing will then be necessary in order to ‘bump’ the shoulder of the case to the correct position and restore the correct headspace. A trimming operation will be a likely consequence of this process. For my money, full length resizing is a safer option in most instances. However, I generally buy 3-die sets with carbide expander buttons to give me all the options.

Two die or not?

Many die makers offer both two and three die sets, as well as variations in the function of each tool within the set. As with your pistol dies, the shell holder is often a separate purchase. For example, you can buy a die which offers just neck sizing or from Lee, a Deluxe set which includes a collet neck sizer to control the case mouth diameter as well as the means to full length resize. From other makers, such as Lyman, a three die set will offer both functions and includes a carbide expander button that obviates the need for inside neck lube. For increased precision, there are sets such as the Redding Competition Bushing 3 Die Neck Sizing Set, with micrometer adjustments… but they are seriously expensive!

Re-sizing dies for use with bottleneck cases are made from plain steel. This means that a lubricant must be employed when full length resizing, in order to prevent the case from jamming. At the other extreme, the application of TOO MUCH can also cause the brass to jam in the die or dent the case by hydraulic pressure! A wide selection of aerosol, fluid and paste lubricants are available, as well as Internet recipes for ‘special’ brews. To start with, I would suggest that you use something like the Hornady Pad and Lube kit, as it makes the application of the lube far more consistent.

When you install the sizer die, the de-capping pin should protrude around 5mm below the bottom of the die. You may need to make some fine adjustments if the pin is very short, allowing the collet to touch the base of the case. Setting this correctly will position the neck expander ball located further up the stem of the tool.

Having adjusted the de-capping pin, we must now set the re-sizing die to either full length or neck size the case. So, we now fit the shell holder, cycle the ram to the top and screw in the sizer die until it touches the shell holder. If we are only neck sizing then we now back the die out of the press by a couple of turns and cycle a fired case through the die, having lightly wiped the neck with lube. The depth of the neck re-sizing will appear as a witness mark. Now turn the die back into the press in small increments until the witness mark blends with the shoulder – but the shoulder is not set back. Tighten the lock ring and size the lubed batch.

If you’re full length resizing, then position the die against the shell holder as before, cycle the press to the bottom and screw the die another 1/8th of a turn downwards. Carefully cycle the press again, feeling for a slight resistance as it rolls over top dead centre. If the press will not cycle with reasonable pressure, back the die out a fraction of a turn and try again. Lock the die and you are good to go. Remember, it is important to remove the residual lube from the sized batch, as it will attract soiling and can cause serious firing issues.

Having restored the dimensions of the case, we now need to make sure that the new bullet will be a safe fit in the neck; described as neck tension. It is made all the more important because the majority of rifle bullets do not have a cannelure into which a crimp can be formed. The level of tension is affected by many variables from the length of the neck, the wall thickness, the age of the brass, the cleanliness of the brass, the bearing length of the bullet and its composition. The expander plug should have created the optimum neck ID for safe assembly, but as this is our first reload, we must make sure that all is well. Carefully measure the outside diameter of the bullet and compare it with a number of readings for the inside diameter (ID) of the neck. A range of interference of .001” to .003” is generally acceptable. If there is NO interference or the figure is much larger then we have a problem.

The first step will be to measure the outside diameter (OD) of the chosen bullet and compare it with the figure quoted in your manual for the calibre in question. If it is the correct size – and we assume that you are reloading the correct calibre, then either the die or the brass are at fault. The next step is to back out the expander/de-capper and do two things. Measure the maximum OD of the expander plug and full length resize a case. Check the ID of the non-expanded neck to see if that is smaller than the bullet diameter (less .001” to .003”). If it is, then the expander is possibly oversize. Honing the plug to size or buying a replacement will sort the issue. If the bullet interference was TOO large then the plug may be undersize or (highly unusually) the neck wall thickness is too large. Forcing the bullet to correct an under expanded neck diameter will result in poor and inconsistent performance and shorten the case life.

Next month we’ll finally put the pieces together.