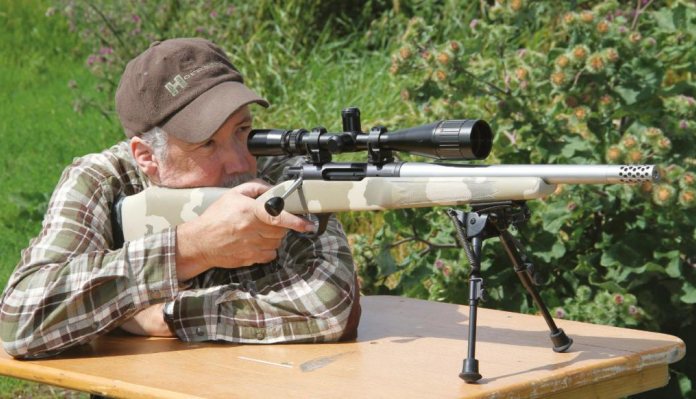 I loaded my cartridges exactly to the spec in the Manual, same brass, primers; everything. When I fired them, the velocity was miles out. How come their data is rubbish, is it something to do with insurance liability?’ How big is a can of worms? Well, in the case of this subject, it’s bloomin’ huge! The sum effect of the significant number of variables that result in our final velocity figures can be considerable. They span every aspect of the handloading process, the firearm, the actual manual and even the weather.

Let’s start with the manual that you’re using. Even if it was published just a few months ago, it is likely that some of the figures will be out of date due to a change in the source of a propellant and its’ altered characteristics. All the data in the manual was obtained in good faith, but it could have been some many months or even years before it was printed. In the meantime, the powder, (for example) once made in Canada, could now be of Australian or South African origin. Same part number, but different performance. If you remember, in a previous edition we looked at the global trail of H4227, from Scotland to Australia! Staying with the manual, we then have to consider the equipment employed in the generation of their data. If it was produced by a bullet manufacturer, then the data will relate to their products, but if it comes from a tool or powder manufacturer then the figures could be generic for bullet size and style.

The arm and barrel length in which their test rounds were fired will have a significant effect upon results. To a lesser extent, the prevailing atmospheric pressure and humidity at their test location(s) will also play a part.

What about our best efforts at making the ammo? Same primer, case, powder charge and bullet as the manual, but the neck tension may be different. If we tested it in the receiver or arm used in the manual would we get their performance figures right? Probably not! Even if we were using the same make and model of arm as that in the manual, it seems that we could not make any assumptions about parity. As an example, some years ago an American reviewer that I trust took two new, identical rifles and put them to that very test. They were AR’s in .223 Rem. They had consecutive serial numbers and the builder confirmed that the chambers has been cut with the same reamers and all other parts were to identical sizes. He chronographed about half a dozen different brands of ammo, dividing each box into half for each rifle. One of the guns consistently averaged 80 to 110 fps faster than the other. Neither he nor the builder could offer a reasonable explanation.

In reality it is highly unlikely that you’ll have the same arm as that used in the manual. Your chamber(s) will have been cut with different reamers, the barrels may have the same number of lands, but the bore diameter could be a few thousandths out and the length will probably be different. Indeed, barrel length in concert with your choice of bullet and propellant will play an important role in determining the velocities that you obtain. Use a very slow powder (for the calibre/bullet combination) in a short barrel and you’ll get a wonderful muzzle flash and rubbish velocities. At the other extreme you will again get poor figures as a fast powder in a very long barrel could reach its’ ‘all-burnt point, before the projectile exits the muzzle.

A couple of years ago Guns & Ammo magazine did an interesting test on the effects on velocity of changes to barrel length. https://www.gunsandammo.com/ editorial/barrel-length-vs-velocity/247991. It hugely elaborated upon a subject that I had toyed with some years before. They took a custom built AR with a 26” White Oak Armaments 1:8 twist, stainless Match barrel. They notched it at one inch intervals all the way down to handgun dimensions to provide a suitable cut point as the length was incrementally reduced. They used 19 different factory cartridge designs ranging in weight from 35 to 77-grains in .223 Rem and 5.56 NATO. Their simple précis of the huge amount was work was this: ‘So, how many fps do you lose shortening a barrel? It depends on where you started. Going from 26 down to 20” actually picked up speed, not lost it. In the regular zone, between 20 and 16”, the velocity loss could be anything from 12 to 50 fps. When we started down into the shortest zone, we sometimes saw velocity losses of more than 100 fps just from a 1-inch change in length. The short answer to the question of how much velocity do you lose per inch? It depends.”

We mentioned the weather. Well, if you’re blasting the pills through a sky screen a few feet from the muzzle, air density will have a small, barely measurable effect. However, leaving the ammo on top of the metal box on a hot summer day, will definitely produce different results to those achieved in the dead of Winter. As an example, a Sierra test from a few years ago using .308 Win with 175 grain HPBT MatchKing bullets resulted in an average of 2451 fps straight from the fridge, 2500 fps at room temperature and 2596 from a simulated hot Summer day. Needless to say, the POI shifted with each batch.

So, what have we learnt? The book figure, or the one on the ammo box must only be taken as a guide. Comparing your barrel length with that of the test arm may give you a clue as to the differences you will obtain. Loads where the minimum muzzle energy is legally specified will require you to take account of your rifle’s specifications and the likely weather conditions at the time of use. Chrono test the batch and allow a sensible margin.