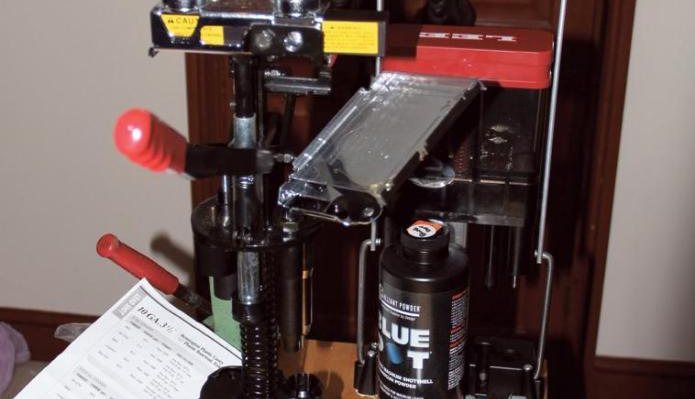 Although I spend 95% of my time reloading centrefire rifle cartridges, either factory or wildcat varieties, I do also reload shotgun, but granted its normally buckshot or slug. However, I have purchased a couple of new shotgun reloading presses in an attempt to produce better and more varied varieties of shotgun shell. It’s a totally different procedure and mind set when you come to reload shotgun cartridges, so here is a guide to what you want and need to make safe and useable shotgun shells.

To me, reloading is always about getting the best possible load for your individual gun but to many it is about saving money over a box of factory shells. Today, with centrefire, yes there can be a big saving but with the heavily discounted cartridges of today in the shotgun world, with common calibres such as 12- and 20-gauge it’s about on par. Where you do save costs is with the odd calibres like 10g, 16g or 28g and any ‘off piste’ speciality load i.e. non lead but .410 is very cost effective to reload, as these can be expensive as factory loads.

It so happens I have a Lee Junior press from when I was 17-years old; it still works well, which is more than I can say for its owner! However, I recently bought a Lee Load All 2 from Henry Kranks and a MEC Steel Master 10g press from Norman Clarks.

You will find that there are common components to rifle shooting, like cases (or hulls here), primers and powder, but then it deviates with the addition of shot not bullets, wads or wadding. It’s all quite straight forward but I would certainly buy a good reloading book, such as ‘Lyman’s Shotshell Reloading’ from Norman Clarks, as it will help determine a safe productive load.

The most important part has to be the case or shell/hull.

This will determine the exact amount and type of powder charge that is safe to use. This is because as with brass cases, no two cases are the same. On a shotgun case, the base area is very critical; cases can have large, small, tapered, hollowed or squared off head sections that drastically alter the powder size, shape and burn characteristics and also determines the length of the wadding needed.

In the front of the Lyman book there is a very clear section on cartridge types, with sectioned hulls to show the individual styles used, which can be then translated into the correct load. Load data will differ for each case and this is clearly indicated in the reload data as to which case it relates to.

Powder choice is usually on the fast side, as most shotguns run at low pressures (except the wee .410 cartridge) so powders like HS-7, Long Shot or Blue Dot are popular. As always, you have to match the burn rate to the wadding size and weight and shot charge. Most systems have a built in powder canister holder, to automatically dispense the powder as part of the reload cycle, although manual presses need the excellent Lee Powder measure kit comprising of 15 cups. These have altering volumes from 0.3cc to 4.3cc capacity and are as easy as scoop and fill- perfect.

Wadding is also incredibly critical as the amount, length and weight play a part in the overall load recipe and pressure limits. You also have a choice of individual fibre wads or onepiece plastic wads, dependent on the load or shot size you use. You can also use a felt under wad to stop the pellets being deformed on firing.

Shot size and total weight of charge is next on the list. This, as with rifles, relates to the powder and burn rate used to maintain performance, yet keep pressures safe. It is very important that the shot size and weight is matched to the wad and powder to maintain the correct height to load column; otherwise, when you crimp the hull, the internals would be either squashed or lose, neither good.

Primers are pretty easy to choose and are very much the same, I use Federal 209A primers and in the Lee Load All 2 it uses a manual primer loader, whilst the MEC 600 has an automated primer chute system.

I had a Browning 10-gauge BPS Hunter pump shotgun for geese and wanted to load some BB shot for use over fields, as I had plenty of steel shot. I use a MEC 600 Steel Master press, which provides automated primer feed, powder and shot charge dispensing and this can be achieved with separate bushes, or a calibrated after-market dispenser. The Lee Load All 2 has everything you need, with a full complement of powder bushes and an addition of some Lee powder measures, if you like, completes the set. It is a manual set up that I like but not available in 10-gauge.

MEC 600 procedure stage one: Take a fired shell and place it into the first station. This resizes the shell’s base (from 8mm to 16mm size) in MEC’s collet system, which is very strong. A single stroke resizes and de- primes in one go. Stage two: Re-prime the shell, as another hand stroke automatically has a primer sitting waiting to be seated from the primer hopper. Take care not to press too hard, so as not to dish the base of the shell. Stage three: Powder dispensing. Now you either insert the correct bush to dispense a certain powder weight, or if the aftermarket Universal Charging bar C/CS is fitted, you dial in the correct setting for the same powder weight. Place the shell at the central position and hold the handle down and move the dispenser/charge bar to the left. This drops the powder into the case. Stage four: Raise the handle and add the SP10 wad at the same station onto the rammer tube and lower the handle to seat the wad. Stage five: Only raise the handle half way to keep the rammer arm in the case, as now you move the charger bar to the right, or reset the universal charging bar, this loads the shot charge. Stage six: Now loaded with powder, wad and shot, you have to complete the closure. Here the correct crimp pattern and pressure is essential, to provide the correct pressure and resistance to achieve the correct ballistics. This is achieved with the crimp station. The first station starts the crimp, check it is six or eight crimp, as it makes a difference. Stage seven: The next station sets the final crimp and here it needs to have a slight rim, no dishing and no voids or swirls to the centre.

That’s all there is to it! The MEC system is a simple, very well built and easy to use reloading station for the shotgun reloader. With practice, you can reload 250 shells an hour!! Not me though. Precision, keep it slow and get identical loads, the MEC is capable of it.

It frees you from the shackles of the industry and ‘standard’ loads and for sub £300 the sky’s your limit.

Let’s add some detail to that procedure, i.e. load credentials. I had Remington plastic cases from some 1 3/8oz loads in 3½-inch hulls that produce 1500fps from the payload of BB steel shot.

This case has a ¼-inch plastic base wad section and a folded crimp closure in six segments. I wanted a heavy load of lead BB shot and the 10-gauge is made to shoot up to 2¼oz.

Looking up a load from the Lyman book, it suggested that with this case I should use a onepiece plastic wad called a Rem SP10, with the addition of one 20-gauge, ¼-inch felt under shot. This sits inside the wad before the pellets are added and aids in stopping pellet deformation as the gun is fired, due to forward thrust.

I used a Federal 209A primer but either a CCI or Fiocchi are equally good. Powder-wise you have a good choice from SR4756, 800X, Long shot, HS-7 or my favourite Blue Dot.

I chose this and 38.5-grains of Blue Dot with the ingredients above produces 1186fps from the lead 2¼oz shot load. If you choose a lighter load, say 2oz, then with Blue Dot the powder weight would increase to 43-grains with the same wad to maintain the correct overall length of powder/wad and shot column to maintain a perfect closure.

I will run through the Lee Load All 2 in another reloading feature but both are ideally suited to the task and appeal to different budgets. For the occasional shooter, sure, get a box of 25 from the dealer, for the budgetminded or the discerning then reloading shotgun cartridges is simple, fun and the sky’s your limit; win win in my view.