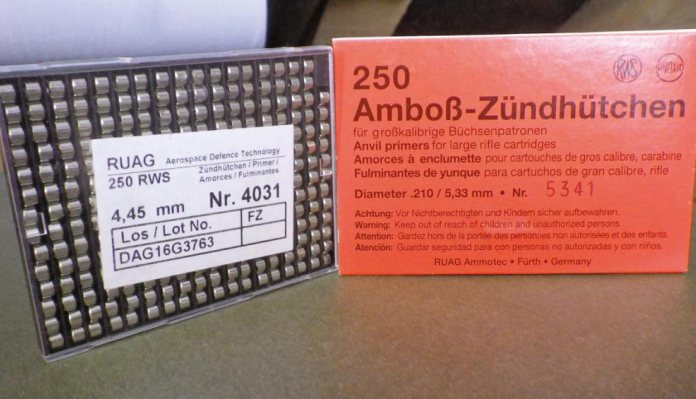 Of all the reloading components, it is probably the humble primer that gets the least attention, which is a mistake, as it’s the most important component in the train, that start the firing process off. Most gun shops stock CCI and Federal brands, and occasionally Remington, and we tend to buy whichever they have on the shelf. Recently however, some from RWS found their way onto my reloading bench, in both large rifle and small pistol sizes, so time to give them a try.

Unusually, the packaging is minimal with primers in rows, in contact with each other, in packets of 250. Only the rows are separated, not the primers within each. There is none of the extensive packaging that other brands come in, but the packs are of course fully compliant with the safety regulations. The lack of protective packaging might suggest that they are not sensitive to impact, which might mean they could be harder to ignite, so testing would be interesting. Typically, they are Boxer-primed with an integral anvil and single, central flash hole, as is the requirement these days and far preferable to the old Berdan-type.

The rifle primers are 0.210” in diameter and small pistol 0.175” and, although checking the dimensions of such small components isn’t easy without specialist equipment, it was possible to establish that the RWS products were consistent in both shape and size. Of course, we must check that they go into their pockets properly and they did not let me down in the test. None were hard to seat and went in faultlessly, and also retained their curved edge and sat slightly below the face of the case heads, which is another essential requirement.

Testing primers in isolation isn’t easy, as all they contribute to the completed ammunition is a spark but testing for sensitivity was possible using a Taurus long barrelled revolver. These guns have an adjustable weight hammer, so it is possible to change the force with which they are struck by the firing pin, again a critical consideration. The RWS continued to ignite, even when the spring was at its lowest setting, so sensitivity is certainly very good, and they would therefore perform well in the most finely tuned of guns.

For testing in terms of consistency, these primers were substituted into an already proven 45-70 load and fired through a chronograph. The results were remarkably consistent, with the velocities of over a five-shot string varying by no more than 6 FPS (the printout from the chronograph was witnessed and retained). The chosen load has always performed well; however, the substitution of RWS primers did show an improvement in terms of consistency of velocity. All of the fired primers showed a ‘normal’ firing pin indent and there was no piercing or deformation visible on the face.

Although testing wasn’t extensive, these primers certainly seem to offer some clear advantages, in terms of both sensitivity and consistency, and they are worth giving a try to see if you can squeeze that little bit more out of your own reloads. The improvement in ammunition performance experienced during testing would certainly justify the price (which is somewhat higher than the other brands). Many thanks to Cheshire Gun Room in Stockport for sourcing the primers tested.