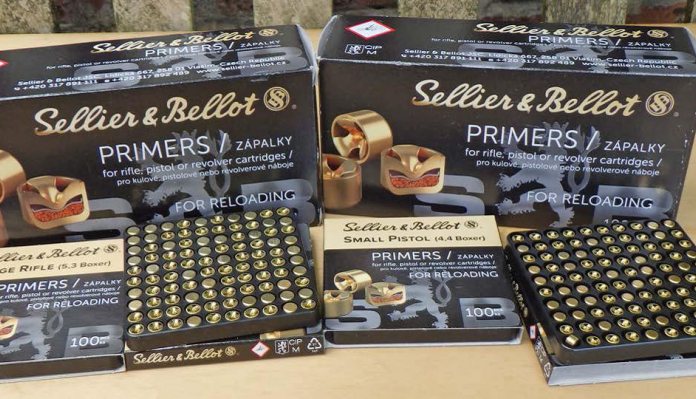 Back in the days of pistol shooting there were just a couple of brands of primers in common use, but now we have a much wider range to choose from. Sellier & Bellot are perhaps better known for their high-quality factory ammunition in the UK but their reloading components are also available here, through importers like Westlander Ltd, and they are well worth a look.

Standard S & B primers are available in small and large sizes, for both rifle and pistol applications, and magnum primers are offered for small pistol only. They are sold in the usual small packs of 100 and larger boxes of 1000 and the packaging is suitable for dumping the primers into the common primer feeder trays.

Before you get to see how they shoot, the first consideration is, of course how well primers seat. The S & B primers were used in a variety of Lee Precision priming tools and they flipped well in the primer trays and fed through all of the mechanisms without any hold ups. The amount of pressure required to seat the primers was just the same as any other brand and, once seated, there was no evidence of any flattening or of any primers not being fully seated. Overall, in both large rifle and small pistol, the S & B primers were easy to use and fitted the primer pockets without any issues at all.

Small pistol primers were tested in a LBR and two underlever rifles. The large rifle sizes were tested in a 45/70 Government calibre underlever and a bolt action .308 Winchester rifle. There were no light strikes in any of the guns, and with the LBR hammer spring slackened off a couple of turns the primers continued to ignite every time. Overall, the primers, in both of the sizes tested, were not hard and they ignited consistently. While describing primers as soft may be very subjective, as all of our guns have different characteristics affecting how primers perform in them, it would be fair to say that the S & B primers are certainly not at the higher end of the primer hardness scale.

Assessing how primers perform is not easy, as they are just one small element in the processes involved in getting the bullet to the target. For testing purposes, the S & B primers were substituted into previously established reloads that used a different brand of primers and had performed well in the test guns. In all of the test loads that incorporated the S & B primers the ammunition performed just as well as it did with the previously used, and more commonly available, brand.

The S & B primers are generally available for around £5.00 less per 1000 than other brands which is a significant saving with reloading components being so expensive nowadays. Yes, it is only a saving of half a penny per round, but ‘every little counts’, as they say, and with no loss in performance compared to the more established brands there is no reason to not give them a try.

The Sellier & Bellot primers tested certainly performed well in all of the test guns and there was no discernable difference, in terms of the performance of the ammunition, when compared to the more expensive brands of primers.